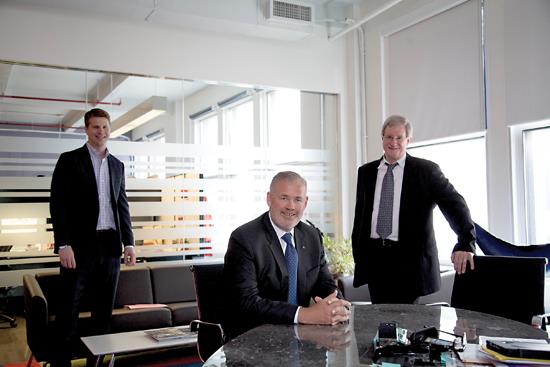 Consolidated Carpet was one of only 15 family-owned businesses in the New York City metropolitan area to receive the Crain’s Family Business Award for 2018. Each company selected to receive this distinguished award was chosen for its outstanding leadership, commitment to community service and its ability to overcome adversity during challenging industry conditions. Consolidated, in its third generation of leadership, was literally built from the ground up by Norwegian immigrants who certainly had to overcome challenges and did so through the relationships they built and the strong work ethic they demonstrated.

Brothers Tom and Leif Meberg, the youngest of ten siblings, were sent to the United States from Norway to make a living. They arrived in 1919 as children. The first skills they acquired were while working as carpenters. In 1933, they worked for another Norwegian named Jaasund and began learning how to install carpet and linoleum. During the war effort seven years later, they worked together in the Brooklyn Navy Yard, installing linoleum in warships that were being built. Following the war, they took the installation skills they developed and started Consolidated Carpet with partner John J. Robbins in 1943.

According to David Meberg, president and CEO, Consolidated’s first 50 years were devoted to flooring installation. The labor shop-or “work room,” as it was referred to at that time-did not sell flooring products. “It was not a retail store,” says David. “We were essentially a subcontractor to commercial dealers or retail dealers who simply would sell product and need it installed.”

The brothers built up an infrastructure, complete with warehouses and trucks, in order to provide floorcovering installations for the New York City market. However, a fire in 1978 nearly cost the company everything, destroying two of the three warehouses along with the offices. Tom and Leif, along with the other family members, were forced to make a very important decision. David explains, “They could’ve gone either way-shut it down and try to find jobs somewhere or build out of the ashes. They decided-I think due to the support and strong relationships they had built up over the years-to stick with the business.” Only ten blocks from the original location, the brothers opened a temporary warehouse/shop. Two years later, they received enough money from insurance to purchase a brand-new location in Brooklyn that was larger than the original. David feels the fire was an opportunity for growth. “Buying a brand-new warehouse gave them the opportunity to grow the business a bit more because they had a better infrastructure in place,” he says. “They were getting a lot of support from their customers, who wanted them to stay in business. They couldn’t have done it without their customers.”

Today, the company is headquartered in Manhattan, and the Brooklyn warehouse was relocated to its current location in Carlstadt, New Jersey in 2008. Now in its 75th year,

A FAMILY AFFAIR
Tom’s son Tor entered the company in 1948 and Leif’s son Lloyd in 1951, marking the rise of the second generation. Tom’s other two sons would later join the ranks-Arne in 1959 and Thomas (Bud) in 1963. The year 1973 officially marks the passing of the business to Tor, Lloyd and Bud. As is customary, the younger generations enter the business following graduation from college or, in Tor’s case, the completion of a tour of duty in the military.

By 1991, Paul, Tor’s son, had been working in the company for approximately 17 years and David, Arne’s son, had put in around eight years when it was time for the third-generation succession to occur. At the urging of the families’ business advisors, the family took a weekend to gather to review current issues, the company’s strategy going forward and who was going to take over following retirement of the current leadership.

Until this point, David realized how limited his position within the company was and wanted the opportunity to affect change. He says, “I had graduated college with a business degree. I saw weaknesses and ways in which we could change the business for the better, but I was somewhat handcuffed. I was feeling disenchanted about my future with the company, and I was also entertaining some other opportunities in different industries that were presenting themselves to me. I had never even gone to a job interview. When I graduated college, I came right to work for the family business.”

The weekend business meeting led to the decision to appoint David as the president and CEO, taking over company operations, and Paul moved into the executive vice president slot, taking over field operations. There was reservation about David’s age-he was 28 at the time-and his ability to master such an important role on the part of the employees; however, the previous generations had been young when placed into positions of authority, which made the decision to promote David an easy one.

The fourth generation is currently being trained. Paul’s son Eric has been working alongside David for three years, handling certain aspects of the company’s accounts and projects. David says, “We are trying to expose [Eric] to as much as possible, so he is ready to step into management.”

GROWING RELATIONSHIPS
In addition to the input that David and Paul brought to their leadership roles, the company made several strategic relationships that only served to further the company’s growth. When David stepped into leadership in 1991, Consolidated was a $12 million company. Since then, it has grown over ten times, pushing the total to well above the $100 million mark. “We’ve grown substantially as a company,” says David. “We’ve grown because we’ve changed. We used to be an installation/project management-centric company that became a full-service contractor. We now sell materials and are a marketing- and sales-centric company. That’s really fueled our growth.”

Consolidated made a strategic decision to join Starnet in 2000. This relationship aligned the company to build business relationships across the nation. When entering those other markets, this relationship allows Consolidated to reach out to the other members who are central to that market as a resource. David says, “We’ve grown significantly since we’ve been a member of Starnet due to the number of opportunities that Starnet has presented us.”

Jeanne Matson, president and CEO of Starnet, says, “Consolidated Carpet is a true American success story. A family business that started with their Norwegian immigrant founders in the early ’40s, Consolidated is a powerhouse commercial flooring company today. We are proud to have them as a member of Starnet and appreciate their many contributions to our cooperative.”

Over the years, Consolidated has built a portfolio that includes high-profile projects like The Freedom Tower, Hudson Yards-one of the largest commercial real estate developments in the world right now-and the redevelopment of the United Nations. Currently, it is participating in the $8 billion LaGuardia airport expansion and renovation project. But all of this would not be possible without the arsenal of skilled tradesmen and women who support Consolidated.

When Tom and Leif started the business in 1943, a handful of laborers made up the Consolidated workforce. Consolidated currently employs 130 to 140 installers and 20 to 30 subcontractors. Additionally, the company utilizes a large number of union members to complete specific jobs.

Consolidated has supported INSTALL (International Standards & Training Alliance) since its inception and employs one of the largest INSTALL–trained labor forces. David has served as chairman of the board of management for INSTALL for 15 years, and says, “The INSTALL program is a great program; it’s essential for union contractors. The training is valuable.”

John McGrath, INSTALL director, says, “INSTALL training and certification helps the business maintain a skilled, reliable crew. This in turn keeps customers satisfied and minimizes repairs and callbacks.” As for INSTALL’s relationship with Consolidated, McGrath says, “Consolidated Carpet’s partnership with INSTALL is a testament to its dedication to quality, efficiency and leadership within the industry.”

THE LAST FIVE YEARS
Since the company celebrated its 70th in 2013, many things have taken place: awards have been given; new departments have been formed; the next generations are being prepped for succession; and plans are being formulated for continued growth.

In addition to the Crain’s Family Business Award, Consolidated also won the Gold in the corporate category in Starnet’s 2018 Design Awards for its work on Eero Saarinen’s two-million square-foot Bell Labs in Holmdel, New Jersey. Saarinen is an architect and industrial designer who is credited with designing the St. Louis Gateway Arch. Consolidated worked alongside designer NPZ Style + Décor, located in New York City, on the project.

Also, Consolidated has entered the polished concrete business and created a division devoted only to concrete. Meberg says, “Polished concrete has taken on such a big part of our business, specifically in our marketplace. It’s been a significant driver of our growth.”

In 2013, the company formalized its healthcare division. According to Meberg, Consolidated focused some of its sales and business development team members on the healthcare sector. A marketing campaign was launched that targeted healthcare directly. Consolidated added New York Presbyterian Hospital and the David Cooke Center to its portfolio. According to Meberg, learning the ins and outs has certainly been challenging. Meberg says, “Consolidated can complete a commercial project with five or six men and knock it off in a timely manner and not have any issues whatsoever, other than going back and replacing carpet tiles where other trades have spilled something on them. A healthcare project starts with the floor leveling and then it’s all kinds of different performance metrics and quality control, and the range of products used are a lot more intense.”

Additionally, the company just started a wood flooring division. It subcontracted its wood work for many years but then decided to take it in-house. Meberg says, “As the industry continues to change, we are seeing wood products become more and more prevalent in the commercial space.”

As mentioned previously, Paul’s son Eric is now involved in the company, ushering in the fourth generation. David indicates that his eldest son, who is high school age, is also interested in entering the family business. He has already worked an internship in the company and did well, according to his father.

Looking toward the future, Meberg says, “The company, now more than ever, is focused on the future and what Consolidated looks like in the next five or ten years. We have an aggressive strategic planning process underway, and we are always looking diligently at growth opportunities-ways we can grow inside and outside of the industry.”

CELEBRATING 75 YEARS OF COMMUNITY
Seventy-five years is certainly a milestone worth celebrating. Owing much of its success to the community in which it operates, Consolidated Carpet decided that rather than throwing the traditional company banquet, it would do something different. David says, “The bottom line is that we wouldn’t be where we are without our industry, without the business community. We felt like the best way to celebrate that was to highlight the way that we give back.”

The Strive for 75 Program sets Consolidated and its associates on a mission to perform 75 good deeds by the end of 2018. The first good deed of the Strive for 75 program was Consolidated’s donation of the “Green Carpet” for the Muscular Dystrophy Association Muscle Team Fundraiser at Chelsea Piers, located in Manhattan. As of September 10, good deed #48-a donation by one of Consolidated’s associates to Stars for Cars, an organization devoted to raising money and awareness for the USO of Metropolitan New York-has been completed.

Meberg notes that he is grateful for the associates who reinforce the company’s motto, P.R.I.D.E. (Personal Responsibility In Delivering Excellence), in their involvement in its events. Each good deed is posted to the company’s Facebook page, and one in particular caught Meberg’s attention. “We have one post where one of our associate’s daughters was raising money to buy Girl Scout cookies for the underprivileged,” he says. “That, to me, shows how our associates become invested in this as well. The fact that our associates step up and are a big part of this is what makes me proud of the whole thing.”