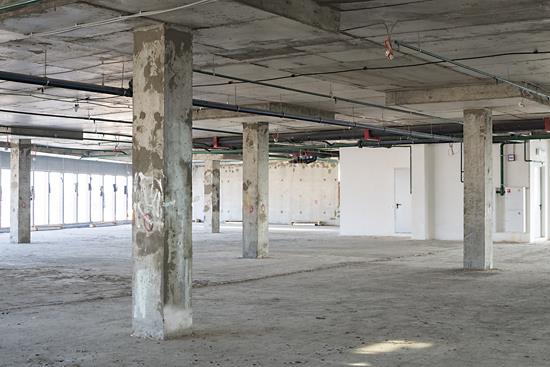 While assessment of a concrete slab and proper action on the front end of a project may come with a steep price tag, those fees can seem minimal when compared to the cost of fixing a flooring failure. Says Donnelly, “The costs become very high, especially in healthcare where the value of failure is sometimes $100 per square foot due to lost revenue.”

EXISTING SLABS POSE PROBLEMS
While much of the focus on failures has been in relation to fast track construction, Donnelly reports that moisture problems in new construction are actually diminishing. “Architects, flooring contractors and owners are being proactive,” he says. “Plus, there is more recognition of the problem.”

While this increased awareness in new construction comes as great news, moisture problems in existing slabs are on the rise—and often come as more of a surprise to the parties involved. “Every year I do a seminar in Kansas City, hosted by the Association of General Contractors of America, and last year there were a number of attendees involved in facilities,” says Donnelly. “They went into shock when I started talking about existing buildings that have poor quality or inferior barriers that could support old floorcovering but not the new floorcoverings that are less breathable.”

In fact, a flooring contractor may pull up a floorcovering that was in place without trouble for decades, and replace it with a new floorcovering material, only to have that new flooring fail.

Donnelly describes one recent situation in which a floorcovering contractor was asked to install flooring in an area that had been a warehouse. Moisture tests were performed in and on the concrete, and the results indicated that the contractor needed to use an upgraded adhesive, which he did. After 120 days, there was a total failure of the homogenous sheet vinyl with water based adhesive.

When Donnelly was called, he looked at the original building plans for the warehouse and discovered that there was no vapor retardant underneath the slab, which is common for a warehouse. Says Donnelly, “Unless you know that there is a high quality vapor retardant directly underneath the slab, then all testing is subject to change without notice and should not be relied upon.”

NEW MATERIALS, NEW CHALLENGES
The move from solvent to water based adhesives plays a role in the failure of floorcoverings in the presence of moisture. However, according to Donnelly, the construction of today’s newer floorcovering materials is also to blame. He adds, “The newer floorcoverings are less permeable. This is true of resinous covering, resilient and carpet tile. While the industry has done amazing things with color and pattern, the reality is that facility managers are demanding products that do not readily stain or soil. Manufactures have done a great job of creating those by tightening the surface matrix. Nothing passes through, so floorcoverings have become almost perfect vapor retarders. When a floorcovering is less permeable than the moisture barrier, problems occur.”

In fact, it wasn’t until 1997 that ASTM Committee E06 on Performance of Buildings first published standards for vapor barriers. According to Donnelly, “Earlier than that, we see lots of different things: some made out of different recycled materials that deteriorate, some virgin materials that didn’t, some improperly installed.” In the 1950s and 1960s, it wasn’t uncommon to use no vapor barrier at all.

THE ONE REAL SOLUTION
“Asbestos adhesive is gone, and floorcovering designers will never make porous floorcovering,” says Donnelly. “The real issue at this point is proper evaluation of the slab. Proper evaluation involves far more than moisture testing. Even when people do proper testing, if they haven’t also researched the slab, data collected in the most pristine manner means nothing. There are many that do proper testing, far fewer that properly evaluate.”

So how is a proper evaluation conducted? The first step is for the flooring contractor to find and study the original construction documents, if they are available. And secondly, if there is still ambiguity about the existence, type or quality of the barrier, the contractor must cut down into the slab and look at the barrier.

According to Donnelly, the process isn’t difficult—but it is crucial. In fact, Donnelly created and sells a set of DVDs that teach the proper procedure. The three-hour program discusses all the points involved in proper testing and evaluation, then instructs viewers on how to look at the data and make sensible choices with the information gleaned. Donnelly believes that the fundamentals of the process can be learned in those three hours.