Concrete Moisture: Identifying and addressing moisture prior to floorcovering installation - May 2017 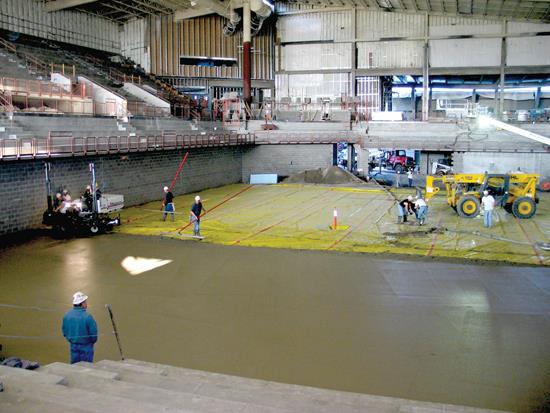 It is no secret that concrete moisture issues continue to exist-both in new construction and renovation work. In many cases, the concrete looks fine and hidden moisture issues aren’t evident until after the floorcovering is installed. The resulting flooring failures are numerous, especially with the introduction of floorcoverings that are less breathable, calling for more measures to be taken on the front end concerning moisture mitigation. The evolution of concrete moisture issues and its subsequent failures have repeatedly stemmed from fast-track building, but other factors have played a huge role as well. The lack of communication between the many trades involved in the building process can lead to more confusion.

Over the years, there has been much talk in the industry of these issues, though not enough proactive measures have been taken. However, after repeated failures and the high costs involved in repairing the issues after the floorcovering has been installed, flooring contractors and building owners are making a point to be more proactive in heading off moisture issues.

Peter Craig of Silpro and Jamie Longo of Specified Surfaces agree that preventative strategies are being implemented into new construction plans more and more frequently. In addition to this, rapid drying concrete has been introduced, saving time and money, and new moisture mitigation products are being developed that are effective on slabs with high moisture. The age old issue of concrete slab moisture continues to exist, but increased awareness coupled with new practices are reducing the incident rate.

AN OUNCE OF PREVENTION
Due to the porous nature of concrete, it works much like a sponge attracting water from above and below. Should a floorcovering be installed before a moisture problem is resolved, the resulting issues are time-consuming and costly-not only to one’s wallet but also to one’s health.

Mold and mildew can form between the top of the slab and the bottom of the floorcovering, causing health issues. The issue also becomes one of downtime and budgetary concerns. What if the cause is determined to be a damaged vapor retarder? Now a moisture mitigation system in the form of a roll-on moisture barrier or a 100% moisture mitigating adhesive must be employed, and the repair costs skyrocket.

The recognition of these potential moisture issues in new construction on the front end has the potential to suppress costs related to flooring failures. Craig, a materials and concrete repair specialist, discusses the baby steps being taken to curb moisture issues, noting, “Recognition of the frequent need for moisture mitigation by design firms, project managers and owners has led to preemptive strategies now being a far more common part of the design and construction process, which has contributed greatly to the reduced number of moisture-related flooring problems occurring today.”

Longo, specializing in subfloor prep, agrees, adding, “There is more awareness of the potential for problems, which is leading to more discussion and the proactive addressing of moisture and the limitations of finished floorcoverings.” However, Longo continues, “There are still issues as well as new problems stemming from non-industry approved admixtures and topical treatments for concrete being employed that pose compatibility and warranty issues for flooring.”

While problems still exist, the good news is the changes that have been implemented are working. “Mix designs are being employed with lower water-to-cement ratios, admixtures are being used to increase workability, and upgraded under-slab vapor retarders are being employed to eliminate ground soil moisture issues on or below grade,” Longo reports. As for fast track and mission critical projects, Longo says, “Projects are specifying high moisture adhesives or mitigation systems to preempt issues.” Fast-track building has been the primary issue for so long, but as Longo suggests, concrete technology and moisture mitigation products and systems are evolving to accommodate the time restraints.

CONCRETE TECHNOLOGY AND TESTING
The technology in moisture mitigating systems is not the only thing changing to meet the demands; concrete is changing as well.

The key factors that contribute to concrete moisture issues in new slabs remain the same, with lack of drying time being the top problem, followed by inadequate drying conditions and excess water in the mixture, among others. According to Brandon Wray of Aridus, the Aridus Rapid-Drying Concrete eliminates moisture issues.

Over the last five to six years, Aridus Rapid-Drying Concrete has made its way into new construction projects as a solution to moisture mitigating products that are costly, time-consuming and not a complete solution. “Rapid-drying concrete is a concrete mixture that places and finishes very similarly to conventional concrete, but dries in less than 45 days,” explains Craig. The Aridus product is a collaborative effort under the umbrella company US Concrete, the largest American ready-mix producer, according to Wray.

Wray, along with others on his team, are working to educate the architects and building owners they work with in an effort to prevent future issues. “There’s a misconception in the industry,” Wray says. “They really don’t realize how complicated concrete can be. Everyone thinks of concrete as one singular product and that it’s the same everywhere.” Wray stresses the importance of understanding the science behind concrete’s makeup and how this understanding can go a long way in preemptively staving off moisture issues and even reducing construction costs.

Currently, medical and education facilities, where time is extremely limited, along with corporate-type buildings are Aridus’ primary clients. Wray says that while the upfront costs are off-putting to some, the advantages far exceed the disadvantages in the form of minimized floor prep and concrete designed around the relative humidity (RH) specifications, both leading to time and money savings.

Proper slab testing also ensures future savings, if good data concerning the conditions of the space is established. However, the testing challenges are numerous and compounded by a lack of communication between all involved in the build process, as well as time constraints placed on the project. It is imperative that testing takes place in a fully enclosed building with HVAC units installed and operational. Otherwise, testing can be inaccurate, offering up results that may give installers the green light prematurely.

Craig brings up an important point when considering the accuracy of the tests themselves. He says, “The sensors used to measure the relative humidity in concrete have an accuracy of +/- 2% up to 90%, and that accuracy becomes progressively worse as the RH level in the concrete increases above 90%.” In other words, the tests are limited up to a certain moisture level within the slab, and at that point become less and less reliable.

The number of tests used is another part of the testing equation. If the number of tests is miscalculated or purposely reduced to save money, the test results will be inaccurate and could lead to a myriad of issues, such as adhesive failure, flooring buckling or bowing, and mold growing on the underside of the floorcovering. ASTM F1869 defines the appropriate number of tests to be three, plus one for every 1,000 square feet. It goes without saying that proper action and testing on the front end may be costly, but it seems this amount is miniscule in comparison to the cost of repairing a flooring failure. In the case of time or budgetary restraints, a roll-on moisture barrier or moisture-mitigating adhesive would be called upon as a solution.

NEW PRODUCTS OFFER LOW RH AND HIGH PH RESISTANCE
The vapor retarder, which is the key to effectively controlling concrete moisture, must be placed directly beneath the slab-and above the layer of sand and gravel in the case of new construction. Existing slabs exhibiting moisture issues need to be checked to ensure a vapor retarder is present before proceeding with moisture remediation. Provided these two scenarios check out and a vapor retarder is present and intact, “a topical moisture mitigation strategy can be selected from among many based on the results of relative humidity testing in the slab,” says Craig. “There are over 50 products and systems being marketed as solutions to high moisture and pH conditions in concrete floor slabs.”

Longo takes it a step further and explains, “Adhesives are increasing the maximum RH and pH levels they tolerate, but the higher adhesive limits do not protect the finished floorcovering from moisture and alkalinity.”

Craig says that water-based adhesives have improved significantly over the years and are now stating effectiveness ratings of RH levels in the low 90s and pH tolerance to 11. To put this in context, 80% to 85% is the desired RH for a concrete slab, which means the adhesive must meet or exceed that level in order to be effective. The same goes for the alkalinity. The pH must meet the standards set forth by ASTM or the adhesive will fail.

Roll-on moisture barrier finishes also offer up higher RH and pH limits, with the RH falling between 95% and 99.9%. But do products like these really work? In order to understand how the RH level is measured, Craig explains, it is important to note that “there is no way to accurately measure, challenge or defend a warranty to 99.9%.” In essence, manufacturers are leaving a way out in case of a failure. This is why independent testing to validate a manufacturer’s performance claim is so important, according to Longo.

In the case of an improperly installed vapor retarder for slabs on ground, Craig says, “The moisture mitigation system must have no moisture or pH limits.” In other words, it is absolutely imperative that the roll-on moisture barrier or moisture-mitigating adhesive be 100% effective.

In years past, this would have been a tall order, but according to Craig, “Today, there are a number of topical moisture mitigation systems that have no moisture or pH limit. When the concrete sub-floor is properly evaluated, and the system properly installed, these systems have a very good success rate.”

THE FUTURE OF COMMUNICATION
While Wray spends a great deal of his time collaborating with each project on a one-on-one basis, he admits there is still room for improvement when it comes to communication, “Bridging the gap of Division 03 and Division 09, we need to figure out a way to do that sufficiently and efficiently and get everyone on board with that.” (Division 03 represents concrete and Division 09 represents finishes-floors, walls and ceilings.) Often, when issues arise, dialogue between the two divisions is required to determine the cause and remedy it. Division 09 turns to Division 03 to ask questions concerning the presence of a vapor retarder, concrete flatness and curling, to name a few. However, the lack of communication, perhaps arising from a lack of understanding of the requirements for each division, is one of the biggest challenges. Regardless, Wray believes education is really the only way to remedy this issue and admits the resources exist. However, reaching everyone in the industry is a huge effort.

THE DIVISIONS OF CONSTRUCTION
The Construction Specifications Institute (CSI) divides the building trades into numbered divisions in their MasterFormat. Prior to 2004 there were 16 divisions. Currently, there are 50 divisions, though Division 03-Concrete-and Division 09-Finishes-remain the same. According to CSI’s website, “MasterFormat is the master list of titles and numbers used to organize specifications and other project information for most commercial building design and construction projects in North America.” The information provided within the MasterFormat is designed to help simplify communication among all involved in the building process.