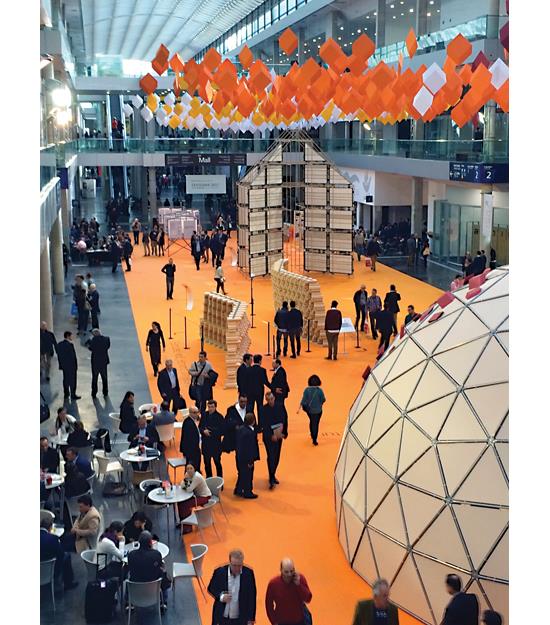 Cevisama, the International Exhibition of Ceramics, ran from February 1 through 5 in Valencia, Spain. More than 78,000 professionals attended, and the expo at the Feria Valencia broke records by attracting just shy of 15,000 foreign visitors, the most ever in the show’s 34 years, including a significantly higher number of Americans.

According to ASCER, the non-profit Spanish Ceramic Tile Manufacturers’ association, exports slowed overall last year, based on numbers through November. But exports to the U.S. grew more than 40% in 2015, jumping from the sixth to the fourth largest destination for Spanish tile, following France, Saudi Arabia and the U.K.

During a press conference, ASCER unveiled a new Tile of Spain advertising campaign, titled Tile Style, part of ongoing efforts to expand the position of Spanish ceramics in the international community.

In the center pathway of the exhibition center, large displays were set up to showcase Trans-Hitos, the Ceramics for Architecture Exhibition, which has been running for 12 years. This year’s theme, Harmonies, refers to the idea of differing companies and professionals coming together to work on a common project related to ceramics, and the innovative work of competition winners as well as architecture students was highlighted.

Extruded ceramic 3-D walls developed by researchers and students at the Harvard University Graduate School of Design were an eye-catching part of the display. A complex extrusion die produces interlocking ornamental modules that can be assembled for straight or curved partitions, providing light control and privacy screening. The walls can be customized to any space for a low cost, and can be dry-stacked for easy disassembly or bonded with cement for a permanent installation.

CERAMICS HIGHLIGHTS
Innovation was also on display in the Torrecid booth in the exhibition hall. The company develops new decorative materials and technologies for manufacturers, and many design trends evolve from capabilities made possible by the firm. Torrecid was the first to produce white digital ink to allow white decoration on top of dark colors, such as white veining on a black stone look, and it was the first to develop metallic ink—including precious metals—for tiles.

The booth was filled with tiles utilizing the latest in decorative techniques, including Torrecid’s innovative reactive and sublimating inks that puff up or sink into the glaze in the kiln, applied with inkjets for intricate surface textures. A few manufacturers are just beginning to experiment with this brand new technology, so it was exciting to see so many examples of possible uses.

Gloss levels were also on display at the show. The mixture of high gloss and matte effects can now be achieved with precision on a single tile. Glossy glazes can be dropped with precision by an inkjet printer onto an otherwise matte decoration for interesting textures and styles. Also, glazed tile can be ornamented with a dry glaze adhered with organic glue that burns off in the kiln for a completely different texture.

Brand new at the show was the development of metallic inks that are chemically resistant and can be used on the floor. Up until now, metallic inks were recommended only for walls.

Spain has a long tradition of producing earthenware, and a common trend at the show was to create looks that speak to historical artisan tiles. Roca’s Memory collection imitates the trowel marks and other imperfections associated with historical cottos. The warm, earthy colors project the traditional look most closely, while the light grey and even white looks offer a more modern take.

Rug designs go back for centuries as well, and in the Carpet collection Aparici manipulated aged rug patterns to fade in and out of aged concrete visuals for a compelling combination that speaks to both the fusion of materials trend as well as the references to history trend. Textile designs on tiles are commonplace, but the creative aged effect that makes the fabric patterns seem to fade in and out offers a new dimension. Aparici also showed an incredibly authentic looking aged terracotta design in porcelain called Terre, offered in an unexpected 10”x39” elongated plank.

Aged and distressed wood looks were common at the show, and Azulev highlighted Evoque on the floor. The matte porcelain comes in white painted and pickled wood options, but most impressive was the burned look, with depth and realism enhanced by the rectified edges for minimal grout lines.

Natucer had one of the most impressive booths, filled from front to back with an array of unique new looks, including Retro, a two-color rustic wood look in hexagons and parallelograms, in addition to planks, with white, grey and black options that allow for interesting design combinations, including a tromp l’oeil cube pattern and the extremely popular chevron. A stained concrete look called Chevron Concret also comes in the parallelogram shape for a sleeker version of the same patterns.

Known for its extruded tile, Natucer has developed Life Arq, an architectural collection of tubed porcelain that can be used as slats for benches or fencing. It never needs to be painted and won’t rot. The new Cube series offers a squared option that was used prominently in the booth for dividers and seating.

Alttoglass specializes in mosaics for walls and floors made of crushed glass that is fired into small tiles through a smalti process, where the glass is mixed with metal oxides for color. Almost 100% of the glass comes from recycled car windshields, making the product extremely sustainable. Unlike cut glass tiles, smalti tiles are opaque and can receive digital printing, and many collections can be used on the floor. The AntiSlip collection offers many options for outdoor use and swimming pools. And Night Glass glows in the dark for unique design options.

Perhaps playing on the industrial chic look, Vives introduced Strand, from the Fusion collection, appropriately named since it mimics oriented strand board, better known by its acronym, OSB. Vives elevated the lowly building material, adding bright semi-transparent color in various sized stripes, lines and shapes that can be combined for large scale patterns.

Several interesting shapes cropped up at the show. The parallelogram, most likely brought in to support the chevron fad, triangles, diamonds, fish scales, elongated bricks and the picket, or elongated hexagon, have been added to the already common hexagon and arabesque.

Equipe introduced Kite, a collection of picket shaped tiles in seven solid colors and a black and white patchwork. Black and white along with black, white and grey were very popular color combinations at the show, as were patchwork tile options. Kite is also available in two tones of aqua, one of the most prolific colors at Cevisama.

Stone looks at the show were plentiful, both in the white and grey marble visuals that are so popular in the U.S. and in darker, more heavily patterned stones like slate. Saloni introduced Menhir, a series that realistically mimics slate in both a combination of traditional greys with ruddy brown and a more modern option with beiges and cream.

Ceracasa’s Dolmen collection beautifully reproduced the look of sandstone in five natural colors. The ultra realistic tiles are available in both a matte and polished finish, a growing trend especially for stone looks, and the tiles look completely different with and without the sheen. The collection comes in both rectified and non-rectified options to accommodate different price points, and coordinating mosaics are also available.