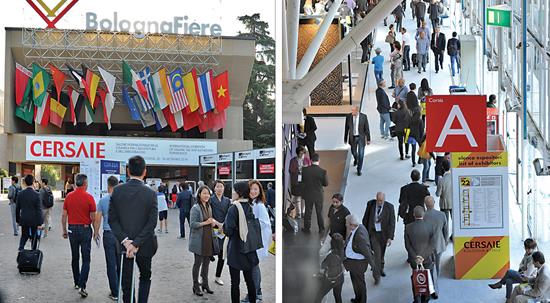 The 33rd annual Cersaie expo, held in late September in Bologna, Italy, attracted more than 101,000 visitors, almost half of whom came from outside Italy. This exhibition of ceramic tile and bathroom fixtures is the largest in the world, with almost 900 exhibitors covering nearly 1.9 million square feet.

What is it that attracts so many exhibitors and visitors to Bologna each year? In addition to seeing the latest in floor and wall tile fashion, the city of Bologna is a hidden jewel, with a wealth of medieval, renaissance and baroque architecture, as well as fantastic Italian cuisine. Bologna lies in the heart of the Emilia Romagna region, where more than 92% of all Italian tile is produced. Adventurous visitors can venture to the Sassuolo ceramic district just outside of the city to see the largest tile making district in the world.

This show’s continued success is due to the fact that it recognizes the importance of presenting the latest surface fashions to architects and interior designers from around the world. To attract this audience, the show offers world-class speakers and architecturally focused educational programs under the theme “Building, Dwelling, Thinking.” This year Cersaie featured renowned Australian architect Glenn Murcutt, who is the seventh consecutive Pritzker Prize winner to give the keynote lecture.

Italy remains the world’s biggest exporter of ceramic tile (in value) and Confindustria Ceramica reports that in 2014 Italian tile exports were up approximately 4%, and this year are on track to surpass that number. This growth can be attributed to two factors, promotion and continued investment. Last year, the Italian ceramic industry invested $290 million in capital improvements. In addition, the Italian tile industry trade association is now in its 27th year and has consistently promoted the brand since its inception, even during the recent recession. Italian exports to the U.S. for the first half of 2015 are up 32.4% and the U.S. market now consumes 14.3% of all the Italian tile manufactured.

TILE TRENDS
With the continued evolution of digital printing technology, almost any look that you can imagine is possible to create. Tile that looks like hardwood flooring has continued to evolve with added texture and realistic distressing. Manmade tile that looks like marble, travertine and other mined materials with 3D veining and gloss or matte finishes are impossible to tell from the real thing. Advancements in manufacturing have also managed to create precise and accurate surface textures that further enhance the realistic look and feel of different styles.

Another manufacturing feat is the production of larger and larger tiles for both floors and walls. Many manufacturers have collections with tiles that are as large as 5’x10’. On the smaller end of the spectrum, the subway tile trend is still strong, but it has evolved a step further and now these smaller size tiles have taken on the appearance of exposed or painted brick. While much of what visitors see at Cersaie is either not available or not marketed to the U.S., all indications point to the North American market getting more sophisticated and adventurous—and the use of ceramic tile in the United States has been on the increase.

One area in particular that has seen a large increase in ceramic tile use is outdoor living spaces. At this year’s show, visitors could tour Day/Off, a space designed by Italian architect Diego Grandi. Occupying an area of 2,700 square feet, Day/Off was designed as an alternating series of outdoor and indoor spaces for spending time in contact with nature.

WHAT’S OLD IS NEW AGAIN
Distressed and worn looks were prominent. Realistic wood-look tiles have been around for several years, but this year there was more wood that looked old and worn, many with streaks of weathered paint and worn edges.

There were also great renditions of oxidized metals that looked weathered and worn, but that old weathered appearance is precisely what managed to garner a very edgy, contemporary feel.

GEOMETRICS
Many manufacturers produced patterned tile that can be installed in different configurations, some creating an almost Escher-like effect. Geometric shapes such as hexagons and parallelograms were also in abundance, creating more interesting options for constructing patterns.

CHEVRONS
The Chevron design seemed to be everywhere at this year’s show. Sometimes the look was created by installing rectangular tiles of different shades and colors in a chevron pattern, and in other cases the tiles were constructed in a parallelogram shape. On display were chevrons in wood looks, stone looks and just plain ceramic looks. It did not seem to matter what the tile alone might look like; all that mattered was that it could be installed in a chevron layout.

BRICK
A relatively new look that we noticed from many of the manufacturers was tile that looked like brick, for both floors and walls. A noteworthy example of this was Marazzi’s Terramix collection with a Scandinavian flavor, inspired by the Belgian bricks used to clad the outside of houses, in widely varying colors. Emil Ceramiche also had a nice brick collection available in six production colors, but the firm took that one step further with its Brickdesign paint collection, which gives architects and designers the opportunity to custom order painted bricks in any color and quantity.

OVERSIZE
Just a few years back, when people talked about oversized tiles, they were referring to tiles that were maybe 24” x 24”. With advancements in manufacturing it is not unusual now to see many manufacturers offering their collections in sizes ranging up to 2’ x 4’ and in some instances as large as 5’ x 10’ for both floor and wall installations. The large tiles certainly help facilitate a minimalistic urban feel but installing them can be challenging and requires special training and equipment.