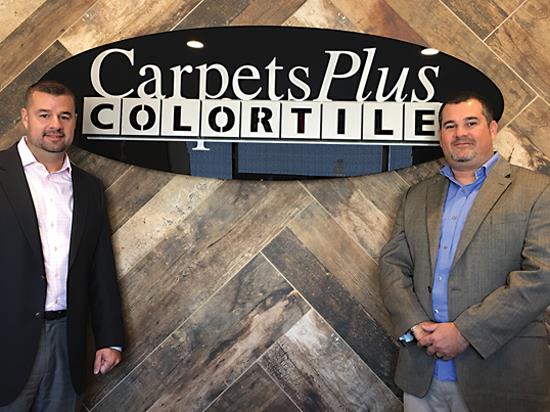 Making friends isn’t usually the first task on a flooring retailer’s to-do list, but that is exactly what John and Jim Brown expect of their employees. “What we try to do every day is make friends; second to that comes sales,” explains Jim. While it might sound like a strange approach, the fact is that the brothers have seen an estimated six to eight competitors enter and fail in their market over the course of their 11-year history, and they credit their ability to survive and thrive to this unique strategy.

WAREHOUSE ORIGINS
The Brown brothers never set out to be in the flooring business. Prior to starting CarpetsPlus ColorTile of Bloomington, John, the elder brother by four years, owned a property management business, and Jim worked in the State Farm corporate headquarters, which is also located in Bloomington. A flooring installer suggested to John that he should open a flooring warehouse to supply product for his own properties, as well as product for other property management companies in the town.

John started Warehouse Carpets Incorporated in an industrial location and had business come knocking even before the doors opened. Still an employee at State Farm, Jim started helping his brother a few weeks into the flooring endeavor, essentially working two jobs simultaneously—State Farm from 6:00 a.m. to 2:15 p.m. and Warehouse Carpets from 2:15 p.m. until 9:00 p.m.—until his wife told him that he had to choose.

John brought Jim into the business as a partner, and today, Jim runs the flooring operation while John maintains the property management business.

THE BUSINESS OF FRIENDSHIP
Faith, family and friendship are important to the Brown brothers, and Jim frequently references the store’s mission, “One store, under God, serving others” as his guiding principle in business. “We first try to treat the customer with care, to be a friend, and we believe the deals will come. We pride ourselves in trying to make sure that the customer leaves in a better mood than they came in.”

Jim’s basis for this approach stems from the fact that he believes most flooring store shoppers intend to buy flooring—very few consumers browse flooring showrooms just for the fun of it—and many also have an idea of what type of flooring they want before they walk through an independent retailer’s doors. This means that, in many cases, consumers are simply looking for affirmation that they are making the right decision with regard to their flooring purchase, and a retail sales associate can’t legitimately provide that affirmation unless they truly know the customer and understand their wants and needs.

To further facilitate that relationship-building, CarpetsPlus ColorTile of Bloomington sends its retail sales associates into customers’ homes to do the measuring work so that they can get better grasp of the customer’s home, style and preferences.

“A lot of flooring stores will send someone out to do the measure and diagram the space,” says Jim. “We have our sales associates do that. At that time, they are still getting to know the customer. How do you get to know them without going into their home? They are going to trust your recommendation more if you have seen what they are working with, and the customer wants to trust the sales associate, wants to know that they will be there from start to finish on the project. We take samples with us into the home, but we’re pretty hands-off. We’re not pushy. If you make friends, sales are the byproduct. Our sales associates basically serve as tour guides through the sales process.”

How do John and Jim ensure that their employees adhere to the CarpetsPlus ColorTile of Bloomington approach? “Leadership has to lead,” says Jim. “And we know that how we act is going to filter into our team. Of course, no one is perfect, and we let everyone on our staff know that there is a support system if they stumble. We won’t let them fail. Along with that, every day when we’re out and about, we are on the lookout for good people. We could be sitting in a restaurant, and we’ll notice whether a server is just doing her job or whether she really cares. And when we see good people around, we add them to our list. We hire people who share our mindset. Then it’s just up to us to lead that way.”

SETTING A HIGH BAR
Property management continues to be a significant portion of CarpetsPlus ColorTile of Bloomington's business, and the company also does quite a bit of builder work, serving starter to luxury homebuilders. Overall, the business is split 50/50 between property management/builder work and retail.

GETTING THEIR NAME OUT
CarpetsPlus ColorTile of Bloomington moved to its new, higher profile location last year. The facility is within sight of the State Farm headquarters, which houses between 15,000 and 20,000 employees and contract workers. The showroom is about 2,000 square feet larger than the showroom at the company’s previous location, for a total 5,000 of square feet.

The pair purchased an old mattress retail store, gutted the building and put a large addition on the front, then invested in a sign. The sign—a 5’x10’ crisp LED marquis—is visible to approximately 40,000 passersby daily and plays a critical role in reaching customers.

In addition to the sign, the company has a unique means of getting its name out. The store sponsors the Normal CornBelters, a professional baseball team in the Bloomington-Normal metropolitan area. At the Corn Crib, where the team plays, CarpetPlus ColorTile of Bloomington created the “World’s Greatest Bathroom,” which is a women’s restroom decked out with premium flooring, finishes and even furniture.

John and Jim conceived of the idea when the team’s owner approached the brothers about advertising at his new stadium, which was then under construction. “Folks really like it,” John says about the bathroom. “It goes a long way with the community and community leaders.” He believes the strategy was especially effective for CarpetsPlus ColorTile of Bloomington because, at the time, it was relatively new in the market, with less than five years of business under its belt.

In addition, the firm recently held its first Ladies’ Night. In line with the brothers’ making-friends strategy, the event was not a veiled attempt at making sales but simply an event designed to provide current and previous female customers with an opportunity to relax and enjoy.

The event, which the pair marketed for a couple of weeks via Facebook and word-of-mouth, featured drinks—both wine and non-alcoholic beverages—heavy appetizers, free massages and merchants, including LulaRoe clothing, skin care and makeup reps. Ladies’ Night attracted more than 100 women and was hosted solely by the company’s female sales representatives.

CarpetsPlus ColorTile of Bloomington says the event was a great success and plans to role out the format a few times annually, with its next one focusing on couples.

FINDING THEIR WAY IN FLOORING
With no experience in the flooring industry when they began CarpetsPlus ColorTile of Bloomington, John and Jim, no doubt, faced challenges. One of the most significant was that some of the large flooring manufacturers, important to a retailer’s product mix, were hesitant to take a risk on them and potentially anger established customers in the area with which CarpetsPlus ColorTile of Bloomington would be competing.

For advice, John and Jim turned to a Beaulieu sales rep, who suggested that the pair join a industry group to help them establish buying power. The rep specifically mentioned CarpetsPlus ColorTile, and the brothers joined within a few months of opening their business.

John and Jim credit the affiliation with a great deal of their success, adding, “Without CarpetsPlus, we wouldn’t be where we are today. We’re a phone call away from decades of knowledge. We can call the CEOs. We can reach coast to coast with different owners who answer our questions and offer ideas.” In fact, it was from a CarpetsPlus colleague that the idea for Ladies’ Night was gleaned.

The pair also uses an affiliation website as well as the online content that it provides, paying close attention to the analytics of the site, which include detailing view counts, phone calls generated from the site and map clicks. .