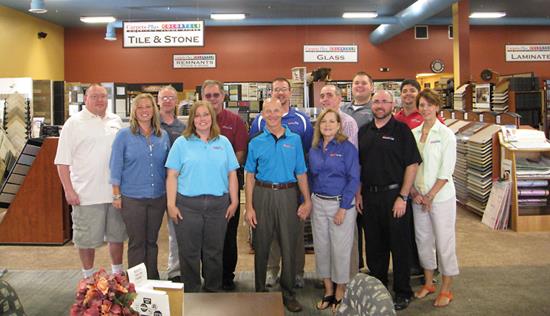 When Maryann and Mark Dougherty opened their first flooring business in Bloomington, Indiana in 1994, they agreed that they wouldn’t add any new product categories to the mix until they had flooring sales perfected. “I wanted to do flooring, and I wanted to do a really super good job with it. I thought, when we get there then we can try to add something new,” says Maryann.

It’s taken 20 years for the Doughertys to feel that they have achieved “super good” and are ready for their first product category addition—window treatments. It’s with this deliberation, patience and honest assessment that the Doughertys have established two successful CarpetsPlus Color Tile locations, at opposite ends of the same city, which together have revenue of $6 million annually.

The first incarnation of the Dougherty’s flooring business, called Hoosier Floorcovering, was a 12’x12’ office with a 2,600 square foot warehouse that primarily served the commercial market. The remaining portion of the business, roughly 15%, was in the builder market.

Three years in, after the Doughertys had moved the business to a location that was more accessible to the general public, the couple determined that the need for better margins and increased cash flow made retail the obvious path for moving forward. Several retail floorcovering operations in the area had started gaining traction in the market, and the Doughertys believed that they could create a better retail flooring experience.

The second location, opened about a decade ago, is a 1,700 square foot showroom in a plaza on the west side of town. The second location recently underwent a full, month-long remodel to update its aesthetics. It carries a similar but differentiated product selection. The team works hard to keep the showrooms fresh with current product trends, and they are not afraid to take a chance of a new display or high-end goods.

Overall, CarpetsPlus Color Tile’s business is 37% residential, 33% builder and 22% commercial, and the remaining 8% is made up of apartment, designer and miscellaneous work. The product mix is 50% soft surface (carpet and area rugs), 30% ceramic tile, and 10% to 15% hardwood, with the remaining portion comprised of resilient and laminate. Area rugs account for about 60% of the total square footage of the showroom at the main location.

CHOOSING AN AFFILIATION
In the early 2000s, Mark reports that, among the retail flooring community, there was a movement toward joining buying groups, and the Doughertys were wooed by many of the existing affiliations.

However, it wasn’t until they visited Mike Peter’s CarpetsPlus Color Tile store in Madison, Wisconsin that the Doughertys found their fit. Alliance Flooring Group—a buying group of about 400 retail locations made up of CarpetsPlus Color Tile, Carpetland Color Tile, Color Tile Outlet and Floorco—seemed much less demanding than other groups with regard to how it allowed its partners to arrange and design their stores. “Before we joined Alliance, the other groups were romancing us,” says Maryann. “They wanted to tell us how to arrange our store, what colors to put on the wall. But it’s my business, and I want to do it my way. That’s what made Alliance a good fit for us.”

Of course, being a part of the Alliance affiliation brings advantages with regard to access to products and pricing on products, but what the Doughertys really value is the camaraderie that they feel with the other members. Says Mark, “The retailers share strategies. They share ideas.” Maryann adds, “The Alliance group is like a family.”

A UNIQUE APPROACH
The concept of family is of great importance to the Doughertys. Maryann notes that while she and Mark have their own children working in their business, they don’t give them preferential treatment. “We treat everyone here like family, not like employees.”

Maryann says that other retailers warned her against caring too much about her employees, but she wouldn’t have it any other way. “It’s about creating a supportive team and keeping people of the same mind,” explains Maryann. “If someone isn’t cooperative, they aren’t for us. My employees are my secondary family.” And, in fact, this seems to be the right approach for CarpetsPlus Color Tile Bloomington, which has several employees who have been with the company for over 15 years.

Ten years ago, the Doughertys established the routine of having a weekly meeting with the entire staff for an hour and a half every Tuesday morning. In these meetings, they ask employees to discuss their concerns, questions and frustrations honestly. Having staff happy enough to stay around long-term provides a multitude of benefits for the company, one of which is that CarpetsPlus Color Tile, as a group, has a great deal of accumulated knowledge about flooring and, therefore, generally knows more than its competition—and certainly more than the big boxes.

If an employee doesn’t know the answer to a customer’s question, however, Maryann is adamant that they offer to find the answer—rather than bumbling through and potentially offering incorrect information to the customer. “We don’t want employees to ever try to get through a conversation without having product knowledge. We’d rather they find the answer and report back.”

TECHNOLOGY AND EDUCATION
To help employees build their knowledge base, the Doughertys take as many employees as they can to each Alliance Flooring Group summit. The company also holds frequent hands-on installation seminars in its warehouse to keep its installation teams in tune with the latest techniques.

In addition, the Doughertys keep their employees up-to-date with new computers, iPhones and iPads. And the stores are run on an industry-specific software program created for Alliance members by Pacific Solutions. The team also uses Pacific Solutions’ FloorRight measuring software, which syncs with the software and, utilizing an iPad and laser measuring, enables them to complete estimates within minutes.

GETTING THE NAME OUT
The company participates in Facebook, Twitter and Pinterest, among others, and its goal with social media participation is to keep the brand in front of its customers. Though the female baby boomer is CarpetsPlus Color Tile’s primary customer at present, the company realizes that it needs to reach the next generation of customers: women ages 30 to 50 with one or more children, who are concerned about such issues as sustainability and buying local. It is primarily these customers that CarpetsPlus Color Tile hopes to reach through social media and its advertising, creating a brand identity that enables CarpetsPlus to stand out from its competitors.

Because of its close proximity to Indiana University, the company has access to high quality and affordable film crews, which produce its commercials. The current commercials feature actors that are similar demographically to the store’s target customer—that is to say diverse and young—and attempt to establish an emotional connection between CarpetsPlus and the home with the slogan, “We’re not just a floor store, we’re part of your home.” The slogan reminds people that flooring is a long-term product, part of the experience of living in a space.

A PROMISING FUTURE
CarpetsPlus Color Tile has hit the $6 million revenue mark before, but not since pre-2008. After several flat years, the company achieved 10% year-over-year growth in 2013 and expects the same for 2014. The company attributes its recent success to several factors, the first being that it simply refuses to lose a job to the big boxes. Says Mark, “We are proactive in coming up with solutions for customers and not just fighting price, price, price.” The company achieves this, in part, by carrying better quality products than the big boxes and by offering superior in-store service as well as top-notch installation.

One area in which the Doughertys really believe that they stand out from the competition is ceramics. The company carries a large selection of Schluter System installation products. “We made it a priority five years ago to go to Schluter shower systems. Some dealers are afraid to carry them because they are more expensive, but I don’t think we’ve lost a single sale to another style” explains Mark. The main location has five full-sized shower displays in the showroom.

In addition, the company has put a significant investment into its commercial department over the last few years and saw a 44% increase in commercial business from 2012 to 2013, which has contributed to CarpetsPlus Color Tile’s recent success.

Though Mark and Maryann have been at it for 20 years, the Doughertys aren’t thinking about an exit strategy. Says Maryann, “I will work until I die. I have no thoughts of retiring. I have a ton of energy and intend to be in this as long as I can be.”