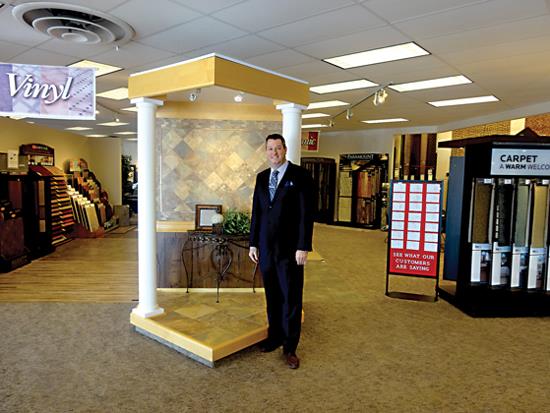 Eric Langan is competitive. Upon graduating from college, the former student-athlete found the world of business to be the next best thing to sports with regard to scratching his competitive itch. He started working in the family business the day after he graduated from college in 2001, bought the business from his father in December 2004, opened new locations in 2006 and 2012, and, just last month, was named Alliance Flooring’s National Retailer of the Year. That’s a lot to fit in before your 37th birthday.

A RELUCTANT ENTREPRENEUR BUILDS A FLOORING EMPIRE
Eric’s grandfather, Don Langan, started the Langan group of Carpetland stores in 1971. Don was, in some ways, reluctant to enter the flooring business. An accountant by trade, Don’s path crossed with that of Rick Meyer, founder of the Carpetland franchise. Meyer offered Don the opportunity to be a partner in a new Davenport, Iowa Carpetland store. Don found the opportunity appealing but frightening, as he had little capital to invest, but Meyer assured him that the venture would be a success.

When the other partner that Meyer had lined up for the Davenport store backed out of the proposition, Don was left as sole proprietor—a position that he found even more terrifying given his financial situation. Fortunately, Meyer helped bankroll the business, and the store was a success.

Don’s son, Mike, started working in his father’s Carpetland store in his teens, and when Don opened a second Carpetland location in Clinton, Iowa in the late ’70s, he tapped Mike to run the business. Mike eventually purchased that store from his father and, in the mid ’80s, bought the Davenport store as well.

And in the 2000s, after Eric had purchased the Langan group of stores from his father, two additional stores were added to the Langan line-up, Cedar Rapids and Waterloo—both in Iowa—for a total of nine locations.

A FOCUS ON INVESTMENT
Eric Langan isn’t afraid of spending money to make money. In fact, he believes that one of the main differentiators between his business and that of his competitors is that he outspends them five to one in advertising.

His aggressive advertising campaign includes television, radio, print and, twice a year, direct mail. Langan Carpetland runs ads on television 40 weeks a year and print ads at roughly the same rate. Eric is the spokesman for both the Langan Carpetland television ads and its radio spots. Roughly 75% of these are promotional, and the remaining 25% are image spots, which typically feature Eric’s wife, two sons and dog as well.

In addition, the company has been steadily increasing its investment in digital search engine optimization, social media and mobile technology.

Eric’s willingness to invest heavily in his business is further evidenced in how he compensates his staff. “My father and grandfather taught me that if I surround myself with great people, I will accomplish great things,” explains Eric. “To that end, we pay our people well above industry averages. And the investment pays back ten fold, if not more.”

In similar fashion, the Langan group seeks to build strong relationships with its suppliers, rather than partnering with every manufacturer and carrying every product line that hits the flooring scene. “I believe in being more important to fewer people. It’s a relationship-based industry and a relationship-based world. You have to be educated enough to know a good deal from a bad deal, of course, but knowing the right people is highly beneficial,” says Eric.

SHOWROOMS SET UP FOR SUCCESS
The Langan Carpetland group has a clear idea of its target customer, which Eric summarizes succinctly as “soccer moms” or, in other words, women between the ages of 30 and 55 with children.

In 2000, the Langan group made the decision to roll all stock off the showroom floors and transform the spaces into design areas, with the goal of showing product in real life settings in order to help consumers visualize the flooring once it is installed. “We took a page from the clothing industry and call our showroom floors our ‘mannequins,’” explains Eric. In addition, each showroom includes a kids’ area as well as a television set, so that women are free to browse with their children and husbands entertained.

At the same time, Eric also has his sights set on winning the next generation’s business. “We are working to cater to the older demographic without excluding the younger one,” he says. “We do very well with Baby Boomers. That consumer is so much different from the Millennial.”

To reach that crowd, the Langan group is heavily invested in social media. “We do Facebook fairly well and have between 3,600 and 3,800 likes there,” says Eric. “We also post to Twitter. This year, I’m committed to doing two blogs a month; we’re upping our activity on Pinterest to 75 pins per month; and we’re getting more active on Houzz. In addition, we will be taping segments for YouTube, where we will be able to track viewing.”

The Langan group mixes informational and promotional posts on social media. Eric explains that the company currently makes about 15 posts to Facebook each month and roughly two-thirds of these are informational—how-tos, room scenes or short surveys where they ask customers to weigh in on different looks. Eric says, “We’re not seeing a tangible response to our social media promotion yet, but that is my goal. I’m planting seeds for the Millennials, first time homebuyers and young professionals. I gauge a lot of the success on what age of customer I see on the showroom floor, and I want to see more customers my age and younger. We are creatures of habit. I know that I have the tendency to buy from the same business over and over again if I have a positive buying experience. If we get a customer earlier in the buying cycle, we will get them long term.”

MOVING FORWARD IN A TOUGH MARKET
Like many in the industry, Eric is concerned about the long-term health of the specialty flooring retailer. “I see the flooring industry mirroring the department store industry. When Walmart came in, it cannibalized mom-and-pop stores. You don’t see Woolworths or little corner stores anymore. It’s the same in flooring with Lowe’s, Home Depot and, in my area, Menard’s. During the recession, we saw a lot of attrition. The challenge now is that you’d better be a larger and more dominant specialty retailer if you want to survive. That’s why we market so heavily.”

Interestingly, Eric doesn’t believe that he will be adding new locations to the Langan group anytime soon, though he hedges, “You never know who is on the other end of the phone offering a good opportunity.”

Instead of growing his physical footprint, Eric is focused on improving efficiency within his current business, “If we can improve our closing percentage, it adds to the profit. If we can reduce expenditures by 1%, it adds to the profit. We want to increase growth through efficiency. I like to think that we’ll be at $30 million in five years or less.” And he isn’t opposed to looking beyond specialty retail to achieve that goal, adding, “I see huge opportunity outside retail with mainstreet commercial and new construction. Home centers don’t dabble there. If we can train people to win that business, those markets will be very appealing.”