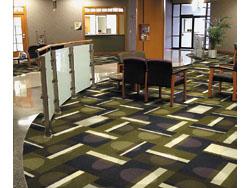 The first carpet tile was made 50 years ago by a small Dutch company called Heuga. That first tile, a bitumen-backed, ten inch square needlefelt product called Felt, was a far cry from the stylish carpet tiles we see in today’s marketplace. For years, tile was a niche product that was used exclusively in the corporate market. But in the last decade, styling has improved dramatically and so have tile’s markets. And sales have far outpaced other floorcoverings in the commercial market, growing at a hefty annual rate of 15%. This year, sales at the manufacturing level reached nearly $1 billion.

In the same year that Russia was leading the space race, launching its first Sputnik satellite, and Elvis wrote “All Shook Up,” a small company in Holland, which had built its business manufacturing bicycle saddle covers and other cycling accessories, bought a needlepunch machine. Before long, Heuga’s owner, P.J. van Heuten, began to experiment with the development of a loose laid wall to wall floorcovering. The most interesting part of this early history is what motivated him to pursue the square tile format: He was bothered with the leftover scraps and waste from a wall to wall installation and decided a modular design would minimize that waste.

In July 1969, Milliken took Anderson’s advice and purchased the U.S. rights to a fusion bonding manufacturing process for making carpet tiles. (This particular process was invented by the Debron division of Carpet Manufacturing Company, based in England.)

Meanwhile, Heuga had also started selling its tiles in the U.S. under the brand name Flor. Doesn’t that name sound familiar? Well, Huega was, in fact, eventually bought by Interface in 1988; today both Huega and Flor are InterfaceFlor brand names. The company still sells over a million yards a year of the style Flor, which the firm says might be the single most installed product in the market today. This is the same product you can find on the floor today at most CVS drug stores nationwide.

One of the first major installations of carpet tile in the U.S. was in 1972, in the 60 story John Hancock building in Boston. The project featured an open floor plan for about 70% of commercial space that allowed access to the building’s subfloor-based power and cabling systems without major costs or downtime. While 22 different mills submitted bids for this 100,000 square yard project, Milliken was awarded the job.

The next year, Ray Anderson left Milliken and he, along with a group of investors, put together a company called Carpets International of Georgia. By 1979—nine years later—when that company had grown to almost $60 million in carpet tile sales, the name was changed to Interface. The next year Interface went public and by 1984 it controlled 30% of the tile market, with $107 million in sales. Today, Interface is the leading producer of modular tiles with estimated sales of $330 million.

Much of the initial growth of modular carpet can be attributed to the move in the late 70s and early 80s toward open office environments, which divided workspace into office cubicles, coupled with the fact that over 800,000 office jobs were created each year between 1975 and 1980. Back then, though, carpet tiles, which were basically utilitarian and aesthetically bland, served a limited market. In fact, at that time there were just three major players in the modular market—C&A, Interface and Milliken.

Growth in the last 15 years has been driven by a number of factors, most notably the dramatic improvement in both the design and performance of carpet tiles. Growth has also been spurred in the last five to seven years by the strength of that product’s sustainability story (see Darius Helm’s article on page 26) and the expansion of the use of carpet tile beyond office segments, into education, retail, healthcare and hospitality. Today, the wholesale price of carpet tiles range from $10 to $40 a square yard.

So what was started 50 years ago in a small town one hour outside of Amsterdam has now become one of the leading floorcoverings in the commercial market. So much so that virtually all of the leading carpet manufacturers in the U.S. have added carpet tile to their product assortment.