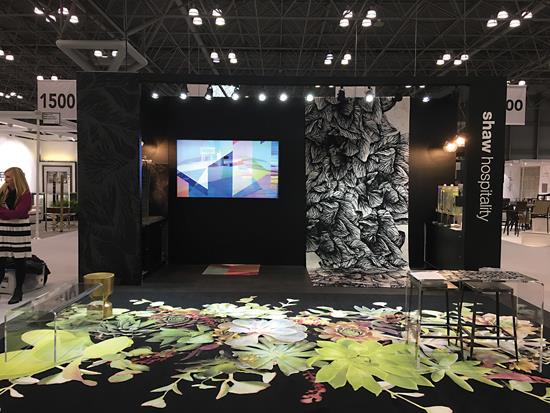 This year’s Boutique Design New York (BDNY) show, held last month in vibrant New York City, was bubbling with creative energy, and for good reason: hospitality is the hottest sector in the commercial market for growth right now. Held just a few blocks from Times Square in the Javits Center, the show is in close proximity to the key groups of decision-makers that influence the design elements we’re seeing in the lodging industry today. Another factor that contributes to the enthusiasm felt at the show is the fact that hospitality is the one sector where designers can experiment with bold design in the name of creating a unique experience for the guest.

This eighth edition of BDNY successfully squeezed 700 exhibitors into 126,000 square feet. Thanks to the formatting discipline of creating rows of 10’x20’ exhibit spaces with 20’x20’ end caps, visitors can get from one end of this show to the other in minutes. Also, by starting the show on Sunday and ending it on Monday, designers can treat this show like a weekend retreat that doesn’t interfere with their busy workload. Some of the show’s magic stems from its collaborative spaces, where design firms team up with suppliers to create theme bars with attached lounges, complete with flowing craft cocktails, DJ music and party themes. This year, one group had a Mad Hatter theme, and another group was playing a variation of Family Feud.

Of course, it doesn’t hurt that the hospitality sector is on fire from a business perspective, both in new construction activity and profitability. In 2017, 112,000 new hotel rooms came online, which is a 12% increase over the number of hotel openings in 2016. And the forecast for 2018 is 130,600 new rooms, or 16% growth, according to Lodging Econometrics. In addition, room rates are up to an average $227 per night, and occupancy rates are high, according to STR Global. If you missed Floor Focus’ coverage of this sector, I invite you to pick up last month’s issue, where we talk about how fast it’s changing to keep consumers hungry for more in the way of experiential excitement.

To be successful in this business, suppliers must convince four different sets of decision makers-all of which attend this show. First and foremost are the hotel brands, the largest of which is Marriott, now that it’s purchased Starwood (SPG). Other key brands are Hilton, Wyndham, Hyatt, Best Western, IHG and Choice Hotels. Just as important are the interior designers, some of which are independent, like Wilson-Red, The Gettys Group, Stonehill Taylor and Rottet Studio, while others work in-house. A third group is the property owners and, lastly, the procurement firms or FF&E (furniture, fixtures and equipment) experts. While this sounds complicated, many industry veterans will tell you this is a relationship business, and while people move around, it’s a manageable group of influencers.

One of the success elements of this show is its management. Michelle Finn, who runs the show, was the publisher of Hospitality Design magazine for 25 years (owned by Nielsen), and for many years she worked on the competing HD Expo show in Las Vegas. Six years ago, she moved over to ST Media Group, which owns BDNY and also publishes Hospitality Style and Boutique Design magazines. Like many successful shows, BDNY recognizes that the exhibit area is just one component in the mix. Other elements at the show include the Gold Key Awards Gala, now in its 37th year, as well as an extensive conference program that offers CEU credits for participation. Many of these events take place on the show floor, but there are also classrooms in the basement of the Javits Center.

Naturally, flooring is one of the hospitality finishes that can contribute to the excitement of the boutique experience. And roughly 30 flooring companies came to this show to promote their ability to offer platforms that can be easily customized to fit the designer’s concept for any given property. Carpet continues to be the leading flooring surface exhibited, with a wide range of price points. On the upper end is woven Axminster, followed by LCL tufted and then injected-dye printing. But LVT offerings are coming on strong, followed by porcelain tile. BDNY presented Shaw Hospitality the Best Product award for its Canvas, a tufted, injection-dye-printed broadloom collection.

Traditionally, success within the hospitality sector has come in waves with peaks and valleys that cycle about every seven years. Much of the buzz at this year’s show was questioning how long this current growth trend can last. The consensus among those we talked to was that 2018 could be the peak for new construction, but that remodel activity could carry the momentum well into the following year.