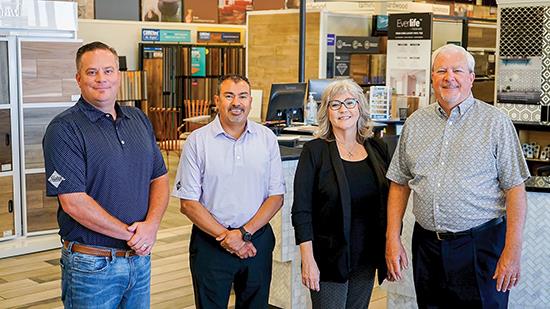 Based in Lubbock, Texas with additional branches in Midland and Amarillo, Yates Flooring is a big fish in a relatively small pond, pulling in customers from a radius of 3.5 hours away. A half day’s drive from Texas’ four biggest cities of Houston, Dallas, Austin and San Antonio, the retailer has a corner on the northwest Texas market, with shoppers traveling in from the neighboring states of New Mexico and Oklahoma as well. In total, the business believes its service area to be around two million residents.

ARMS WIDE
While many flooring retailers boast being family businesses, Yates Flooring Center is an extended-family business. Started in 1976 by Bobby and Becky Yates, the business is currently run by Ryan Rogers and Joel Jaime, co-CEOs. At one point in time, somewhere around 45 Yates employees had another family member working in the business.

While Bobby remains president of the firm, he has handed day-to-day responsibilities over to his co-CEOs. Both Ryan and Joel have worked for the Yates family for decades, climbing their way through starter jobs to lead roles. Ryan-lifelong best friend of Bobby and Becky’s son Joey-came up through sales and oversees front-of-the-house operations, and Joel, who rose through the ranks of the warehouse, oversees what Yates calls the heart-of-the-house operations, which include warehouse and installation. Three years ago, Ryan bought into the business, sharing ownership with Bobby and Becky and their three children. Bobby’s sister, Jana Stout, serves as chief operating officer, and Ryan’s wife, Charity, is director of human resources.

Originally, Yates was segmented into two distinct businesses: a discount carpet warehouse and an interiors business. In the late 1990s, Bobby and Becky purchased a former grocery store on the northwest side of Lubbock, gutted the space and, in 2001, combined the businesses into one operation in the new space. As a destination retailer, Yates’ Lubbock store is a massive space made up of a 30,000-square-foot showroom and a 30,000-square-foot warehouse. The Lubbock location welcomes 70 to 75 walk-in customers a day.

Amarillo and Midland are both over 100 miles away from Lubbock. In Midland, Yates is currently opening a new 30,000-square-foot showroom, which will replace its existing facility. The company has a team on the ground there overseeing that endeavor.

BRANCHING OUT
Yates started in retail but added a builder business in the early 1980s when local builders came in asking for service, tired of dealing with the big boxes, reports Ryan.

In the early 1990s, Becky’s brother, Pat, started to bid on commercial projects. Yates’ commercial business snowballed from there. Pat moved the business forward for 15 years and then Ryan took over. Joel’s nephew Rene now oversees the commercial side.

Resilient and carpet are the top-selling categories for Yates, accounting for around 40% and 25% of product sales, respectively, both barely edging out ceramic (25%), though with shower and backsplash tile included, tile accounts for closer to 30% of business. The company also sells hardwood and a little laminate. Ryan expects laminate sales to grow, as they have across the country, noting that northwest Texas is a couple years behind the big cities when it comes to trends.

Yates has dabbled in offerings beyond flooring several times through its decades-these included wallpaper and countertops-but today prefers to “stay in its lane,” says Ryan, focusing on the area where it excels. The company believes it has the largest inventory of area rugs in its territory.

ENTREPRENEURIAL SPIRIT
Bobby’s father owned a carpet cleaning business. During Bobby’s college years-studying accounting at Texas Tech-he would help his father in the business. One day, Bobby was called in to clean a carpet that was unredeemable. When he told the client that the carpet couldn’t be cleaned, she asked him whether he could replace it for her. Bobby purchased a roll of carpet and pad, found an installer to do the labor, and replaced the woman’s carpet. After that, he rented a storage unit and purchased two rolls, then five, then more, and any time he was called in to clean a carpet that could not be cleaned, he offered the customer “a heck of a deal” on new broadloom.

Bobby launched the operation as a formal business in 1976, and Becky handled the people side of the business for the first 25 years, after which she transitioned to a less active role as president of the board.

ADVERTISING
Advertising is one of Yates’ strengths. Bobby and Becky’s daughter, Neely, is married to Brandon Rawe, and together they manage the company’s outreach efforts. Brandon and Neely focus on marketing through the company’s social media channels, as well as producing unique television and radio spots.

Once a year, Yates brings in ten to 15 of its top builder partners and offers them a free 30-second spot to talk about their business. “We shoot them interviewing, show screenshots of their homes, then have them say ‘I’m __, and I’m floored by Yates’,” explains Ryan, “That’s our tag line.” Brandon writes, directs, shoots and produces the pieces, then liaises with the local television and radio stations to air them.

“It’s a nice incentive for builders to do business with us,” says Ryan. “They get a 30-second commercial. We don’t charge them anything to do it. It’s a giveback to our builders, but it’s also showing our products, and it creates a partnership. The first year we did it, we only had one or two builders that filmed. Last year, we had 19 commercials made.” Ryan appreciates that the commercials are a soft sell and eloquently done.

STRENGTHS
Ryan believes Yates’ staff is second to none. “The sales team members are very polished, knowledgeable, educated and trustworthy,” he reports. “I believe at last count we had around 20 staff members who have been here 15 years or more and about seven of them are salespeople.”

In addition, Ryan believes the Yates facility and stocking position is a significant boon. “The size of our facility is a competitive advantage,” he notes. “It’s expensive to operate, but being able to stock and offer instant gratification is key. In this community, people are more upper middle class than working class. And they don’t mind spending a little more for convenience.”

Ryan also sees great value in Yates’ National Floorcovering Alliance membership. He and Joel attend the group’s conferences “religiously” with their wives, and Ryan appreciates the give-and-take nature of the group, noting that he is dedicated to offering his own knowledge and insights to other members anytime he can.

FINDING INSTALLERS
While Yates’ has no problem staffing its front-of-house operations, the “heart of the house” has proven more challenging.

“The warehouse is hot in the summer and cold in the winter,” says Ryan. “Plus, the local grocery stores are paying $17/hour now, and warehouse workers need to be forklift certified. Finding installers has been hard too. All the old-school installers worked their tails off to put their kids through college, and now they are selling rather than installing. I’ve signed eight new crews in the last 18 months, but I could use eight or ten more. If you break up our business into numbers, the largest thing we sell is installation. It’s our number one revenue source, so finding installers [is always on my mind].”