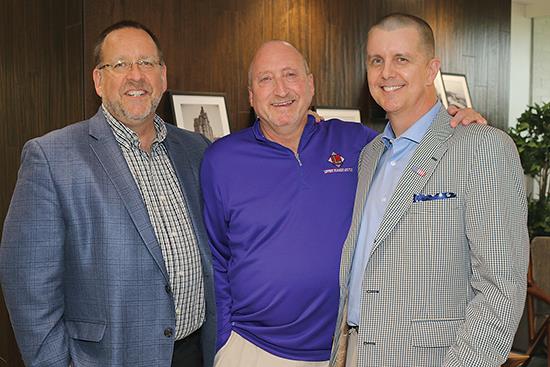 Celebrating his family business’ 70-year anniversary, Lippert Flooring & Tile president Les Lippert is both grateful and contemplative. Believing his highest obligation as the current steward of the operation is to keep it moving in the right direction through the coming years, Les is obsessed with finding individuals-either within or outside the family-with the commitment and vision to lead that charge. It isn’t easy, but neither is it impossible. Les and his brother Jeff, executive vice president and estimator, have implemented a strategic plan to identify, tap and mentor this next generation of Lippert leadership.

KITCHEN TABLE BEGINNINGS
William Lippert Sr. was the oldest son of a German immigrant. Born in St. Ansgar, Iowa as one of nine kids, William decided that he didn’t want to take over the family farm, as was expected of the oldest son, but set out for Milwaukee and took a job as an assistant at a ceramic tile installation firm. He spent the next 30 years in the business-primarily with a single employer-and when his oldest son, Bill Jr., graduated from high school, he went to his employer and asked them to give his son a job. The employer said that he didn’t have a place for Bill Jr. in the business and so, explains Les, “My grandfather said, ‘to hell with you’ and started his own business at the kitchen table with his wife and son.”

William’s four sons-Bill Jr., Alan, Wayne and Gary-all ended up in the business, and eventually William handed the president title off to Bill Jr. In the early ‘60s, Bill Jr. was exposed to the cultured marble sink vanity top business, which was new technology at the time, so he, his two sons, and his brothers Wayne and Gary branched off to start a manufacturing business in that field called Lippert Molded Marble Products, and Alan took over Lippert as president. The flooring and vanity businesses operated under one parent company until 1989.

Having grown up with the tools of the trade in his hands, Alan didn’t necessarily want the same for his sons. In addition, the business was still a small operation, and it wasn’t clear whether there was room for Jeff and Les. Alan encouraged his sons to go to college and to try to find a career outside the tile business. “Dad couldn’t afford to send us to college but gave us the opportunity to work and pay our way,” recalls Les. Both sons took him up on the offer.

After graduating, however, Les, a commercial art and design major, found his opportunities limited. He was complaining about this one night to his father, who was concurrently complaining about not being able to find a competent hire to fill a sales and estimating role. Later in the evening, Alan said to Les, “I never wanted to ask you this, but would you consider working for the company?”

Les told his father that he would discuss the idea with his wife. Les recalls, “I knew that I was making a lifelong decision and that I had to accept the opportunity. I couldn’t not do it. You can’t get this business out of your blood. There have been a lot of challenges-blood, sweat and tears shed-but I most assuredly do not regret my decision. It has been a tremendous blessing.”

LEARNING TO FLY
Lippert was a tile-only firm until 1992, when it purchased a struggling business, Milwaukee-based Boelkow Floors, which specialized in carpet and resilient. The Boelkow division continued struggling under Lippert, and a couple of years in, Alan called Les into his office to discuss the future of the endeavor. “I was controller of the company then. My dad asked me, ‘What should we do with the [Boelkow] part of the business, which isn’t performing well? I think we should shut it down.’ I said, ‘I don’t like that idea. I’d like to figure out how to earn the money back that we’ve put in.’ My father asked, ‘What’s wrong with it?’ I said, ‘We haven’t managed it our way.’ He responded, ‘Good, that’s what I was hoping you would say. I want you to take it over.’”

Les thought about his father’s offer for a week or two and realized that the opportunity gave him a chance to prove himself-not to his father but to himself. “I needed to understand it if I was going to be capable of running the whole business someday,” says Les. He went to his father and said, “I’ll take it on one condition. I will be fully responsible for the P&L. You can’t manage or micromanage it in any way. I need to know what I can do. He agreed, and he never stood in my way.” This turned out to be a defining task for Les, who discovered not only his own ability to lead but also formulated many of the principals that later made him successful as head of Lippert, namely his belief that employees are a business’ most important asset and that holding nothing sacred is key to enduring success.

Regarding Boelkow, Les came to realize that the human capital of the carpet and resilient business was outstanding. It was great at estimating and installation, so he went to the team and said, “I just saved your jobs. I’m going to teach you how to be successful in business, and you’re going to teach me your part of the business.”

Between 1994 and 1999, the segment quadrupled its revenue and came to be both the largest part and profit center of Lippert. “The resources were in place; they just needed to be taught how to organize,” Les notes.

In 2000, after 46 years of running Lippert, Alan walked away from the business he grew up in and left it in his sons’ hands. “He walked out and never looked back,” says Les.

Of his father, who passed away in 2017, Les says, “My father was decidedly old school. In the construction industry back then, it was sort of a men-are-men culture. Your word was your bond. Integrity was paramount. You did the right thing for the right reasons because that’s what was expected. My father was one of the hardest working human beings I’ve known. My brother is a carbon copy of him. I’d rather be efficient, achieve greater ROI with less effort. That’s what makes us a great team.”

NOTHING IS SACRED
Perhaps it was Alan’s approach of letting his sons succeed or fail at their own hand that gives them the confidence not to hold reverently to “how things are done,” and instead disassemble, retool or even all-out demolish as necessary to achieve the higher goal, which, is seeing the organization continue for years to come. “I’m the longest serving president Lippert has had, but I know I’m just a temporary steward of the organization, just like my dad, uncle and grandfather were. I’m not the business, and the business isn’t me. It’s something that I serve. There are 100 families reliant on me to be prudent and wise. I take that very seriously. Ideally, the business continues for decades longer and continues on the same trajectory that is has been on for the last 70 years.”

To that end, if something feels stale or isn’t working, Les isn’t afraid to toss it out and start over. “I crave change for improvement,” he says. “I will make any change that will improve the income. I love efficiency-better ROI with less effort. Everything is on the table. I just hired a new controller. She’s very experienced, and I said, ‘I want you to learn everything we’re doing and then smash it up and make it better.’” While Les says that Lippert’s sales and operational processes are strong, he believes there is work to be done in accounting, and he has tasked the controller with its improvement.

Education is another important component of Les’ strategy. Lippert works hard to be on the forefront of any new technologies, processes or developments in the market. The company offers continual training to its staff, top to bottom, and invests in new equipment as it becomes available.

HANDING IT OFF
Les and Jeff’s children are all established in their careers, and none of those careers are flooring, so the pair is fairly certain that the next generation of leadership won’t be a Lippert.

Ten years ago, Les set out to build that next group of successors, “My job as president is to find the best people, family or not, and put the Lippert legacy in the hands of capable individuals.” Les is seeking young people with drive and motivation, character, good personality, relatable skills, and knowledge and leadership DNA. “We’re not looking to put bodies in empty chairs, but people who want to improve and diversify this business, people who want to devote their careers to this business,” he notes. Les, who is younger than Jeff, has a self-imposed goal of retiring in three and a half years, but he doesn’t expect to vanish, as his father did, pointing out that he and his brother have a cumulative 80 years of business knowledge.

Lippert works with a headhunter firm and has implemented an arduous search and interview process with a multiple interview format. What’s more, Lippert’s leadership team has to vote unanimously for every hire. “That discipline,” reports Les, “has led us to landing a nice group of really great people.”

He continues, “It seems to me that my mission is to put Lippert into the hands of able-bodied successors and give them the same chance Jeff and I had to make mistakes and correct them, to learn and grow, to entrepreneur.”