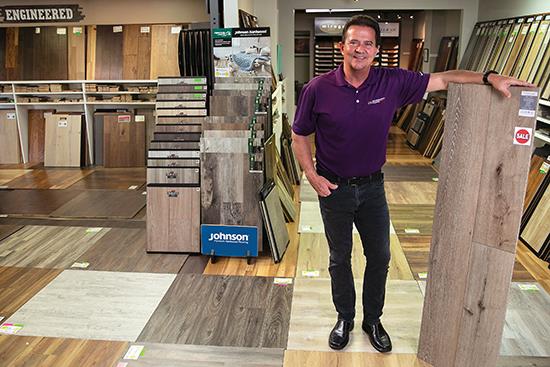 Based in Louisville, Kentucky, River City Flooring is a three-pronged flooring business with 75% of sales from its online and wholesale businesses and 25% from retail. In August, founder and owner Chris Brumley will open a second retail store in a prime location and catering to a higher-end consumer. “Our current location is in a business park. It’s kind of a destination,” says Brumley. “My business coach always says, ‘When the consumer raises their periscope, you’d better be visible,’ so we are looking to solidify our retail business even more.”

FINDING HIS FOOTING IN FLOORING
Following his graduation from high school, Brumley was undecided about what direction to take, when his father, a carpet mill representative, said, “I have a territory open. Do you want to be a rep?”

“Thirty-nine years later, I’m glad I took that path,” says Brumley. Brumley was a rep for multiple companies that have since been absorbed by other corporations or gone out of business, including D&W Cedar Carpets, Cumberland, Interloom and Caladium, and then transitioned to the installer side of flooring.

As an installer, he was running a sand-and-finish company with nine crews and part of the Bona Certified Craftsman Program, but when the 2007 recession hit, he had to reinvent his business. “My coach said to me, ‘No one knows you except the builders who aren’t paying you now.’ We established the retail business, did a million our first year, and have been growing ever since. It’s been a great journey,” says Brumley.

A SUNNY EMPLOYEE PERK
In October 2020, Brumley purchased a condominium in Panama City Beach, Florida. He and his wife remodeled the property extensively and offer each employee a free week’s stay each year. The employees’ only cost is paying the cleaning service.

Brumley and his wife both play competitive traveling tennis, and he got the idea from a fellow player. “We want to give back to our employees, to show them our appreciation,” says Brumley. Last year, every employee took advantage of the perk, and the calendar is booked for 2022 as well.

A CONSTANT EVOLUTION
Just as Brumley followed the flow of the market when the recession took hold in ’07, he is willing to change his business to suit the needs of the day. In 2010, he added the Internet business. “We can’t live off retail alone in today’s climate,” he says. In 2021, his Internet and wholesale businesses chalked up 26% growth and are on a similar trajectory this year. In addition, last fall, as sourcing became a challenge, River City began stocking more product. “We didn’t have control over our business because we were relying on the mills or distributors to have inventory. Today, we are stocking more flooring than we ever have,” he says.

It was then Brumley realized, “Since we have inventory, let’s put together a program for remodelers and improvement folks. Snap-together flooring doesn’t require artisans to put it in.” That led him to build his wholesale offering.

While much has been written about the installer shortage and what that means for the flooring industry as a whole, less has been said about the future of retail or, more specifically, retailers.

Says Brumley, “I ask the reps who come in, ‘How many new flooring retail stores opened in your territory last year?’ They’ll say, ‘One opened last year.’ I’ll say, ‘And how many closed?’ They’ll say, ‘Seven.’ Then I’ll ask, ‘What’s the average age of the flooring store owners you work with?’ ‘Over 60,’ they say. If you look at the tea leaves, where are we going as an industry in retail?”

That being said, he believes that changes among the installer pool demand that retailers take notice. “Today, all the installers have Instagram and Facebook accounts,” he notes. “Why should they work for retailers when they can do wholesale and make more money? The younger generation of installers is more tech savvy. They are getting leads and referrals themselves and not relying on the retail store to tell them what to do and to mark up their labor.”

Brumley sees these factors as two of the “ingredients” in the retail soup of the future. And that has led him to yet another consideration in response to the inevitable change afoot: joining a buying group.

Within the next five years, Brumley plans to hand the business off to a woman who has been working with him for 12 years, and Brumley believes it would be a boon for her to have the business established with a group to support her.

He is also, however, interested in the private label offering that buying groups provide. Because, while he’s happy to sell online, he also realizes that he needs differentiation between what he sells on the Internet and his retail offering, in an effort to eliminate showrooming.

This has become even more important as River City looks to open its new location to serve the higher-end consumer. In addition to the standard flooring products it already sells, River City will add ready-to-assemble cabinetry, Hunter Douglas blinds and possibly cash-and-carry ceramic to its offering in the second location.

POSSIBILITIES THINKING
Brumley has been working with the same business coach for decades now. “He’s a possibilities thinker,” says Brumley. “I’d say to him, ‘The entire retail flooring business is slow in January, February and March.’ I had bought in to all the excuses for that reasoning. We just had our best first quarter ever this year, and he asked me, ‘Weren’t you the guy who said it’s always slow those months?’ You can change your destiny. Let’s do it different from the rest of the industry-that’s my motto. There are no classes to teach you how to run a floorcovering business. It’s trial and error and making sure you have enough money to get you through the errors.”

TARGETING THE CUSTOMER
Brumley and his team have identified four different types of buyers in the market: customers age 50 and up, who will hire River City to install their flooring; customers ages 40 to 50, who are Internet-shopping savvy and don’t have a fear of buying online but will hire out installation; customers ages 35 to 40, who will have a “buddy” install their flooring; and customers under 35, who want something for $1/square foot or less. “We are touching the top three of those,” says Brumley. “We can’t help the bottom guy.”

Brumley had his website built from the ground up, using unique code rather than a template, and that has helped him establish and maintain a strong presence in online searches. River City comes up at the top of local listings.

River City invests “a little” in Google advertising and sends out postcards monthly to a portion of the local buying community. In addition, last fall, Brumley re-launched TV advertising, pulling customers in with an in-your-face first line: “Stop the BS. Quit buying your flooring from a box store [BS].” The commercial goes on to emphasize River City’s in-stock offering and plays on major local networks and HGTV. While Brumley previously served as the face of the company, he is consciously taking advertising in a different direction due to his nearing succession handoff.

Of course, word of mouth also plays a big role in communities. “You have to fix mistakes,” says Brumley. “Reviews are like tattoos. If you have a good one, you want to show it off, and if you get a bad one, you can never get rid of it.”

River City contracts its social media programs out, and they are very active.

In addition, River City gives all its hardwood and vinyl buyers free flooring cleaner for life. The bottle carries the River City logo and keeps the brand top-of-mind for customers. “We have done that for years,” says Brumley. “It’s crazy how many customers come in for a refill on Saturdays.”

A TIPPING POINT
The endless cost increases are Brumley’s biggest stressor today. “When is the tipping point when the consumer says, ‘I’ll just wait, I can’t afford it’?” he asks. “The current prices will promote lower-quality products, and that could really hurt the LVP business in a few years. We are trying to stay competitive with the endless sea of increases-remaining relevant, visible and profitable. We haven’t stopped fighting since February 2020. There’s no coasting in this business anymore. You have to have your eyes wide open. You have to be able to change quickly. Complacency is a horrible disease, and it happens easily.”