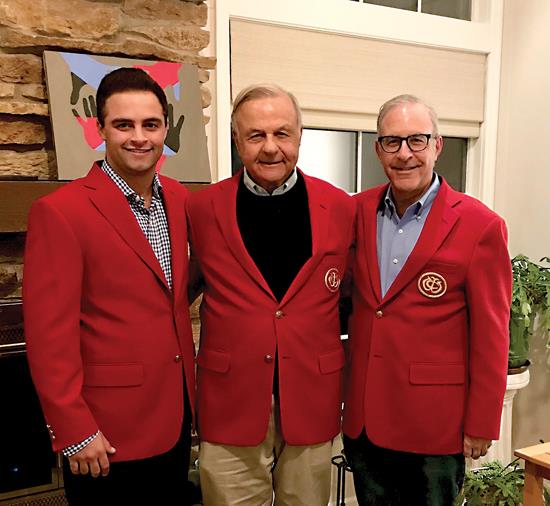 Kerns Carpet One Floor & Home is a quintessential family business. Started by Milton Kern in 1935, today the business is run by Milton’s son Pat, his grandson Bill and his great-grandson Michael-all of whom share great passion for its preservation and success.

At the core of that passion is pride: pride in the work, the successes and even the failures of the generations before; pride in maintaining an organization of high integrity; and a pride in realizing and honoring a vision that is larger than the individual. After college, Bill followed his love of politics to D.C., where he worked for a Wisconsin senator on Capital Hill for six years, all the while dodging his dad’s requests to come home and join Kerns, but Bill ultimately heeded Pat’s call, “I realized my future was in the family business, and I wanted to be in the position of helping my father and family grow Kerns,” says Bill.

SEEDS OF THE BUSINESS
Milton Kerns started a small flooring and furniture business in Milwaukee, Wisconsin in 1935, during the Great Depression. Business was tough but survived until World War II, when Milton was unable to acquire merchandise and had to suspend operations. He resumed after the war, focused on flooring and, in particular, carpet. At the time, Milton struggled to convince the mills to sell him product, as they were partnered with some of Kerns’ larger competitors, but eventually Mohawk agreed.

At age 23, after college and a stint in the service, Pat joined his father, and the business became known as Milton Kerns & Son. For Pat, early life in the family business wasn’t a love affair, “I hated it for two years then finally got excited,” he laughs.

Unlike his father and grandfather, Michael, who worked at Kerns through middle school and high school, jumped into a flooring career with both feet, “I started selling at 21 and haven’t looked back,” he says. Today, Pat, who is semi-retired but still comes to work every day, is the chairman of Kerns; Bill is the president; and Michael is a store manager.

Kerns has showrooms in two of Milwaukee’s suburbs, Brookfield and Mequon. The Brookfield location was established in 1994, but the Mequon showroom is brand new, opened in July, having moved only 1.5 miles from its Fox Point location-where it had been for 47 years-to a new, high-end area of town and a location with greater visibility. The company also has two ProSource locations: Milwaukee, which opened in 1991, and Franklin, which opened in 1999.

In addition, about ten years ago, the company launched a shop-at-home service. “I’m a big proponent of shop-at-home,” says Bill. “As the customer is aging, we want to provide a level of service in their home if necessary.” Kerns’ sales staff is specially trained on selling inside the home.

The company also has a commercial operation, which works out of its Carpet One stores. “We have someone on the street prospecting for new accounts,” explains Bill. “Healthcare is one of our specialties. We do lots of carpet tile and LVT.” The company has about two commercial crews in the field daily.

LAUNCHING CARPET ONE
Kerns was one of the founding 13 members of Carpet One, and Pat recounts the story of its start with great fondness. “I was the president of the Retail Floor Covering Institute, and I was at the Doral country club in Florida for the annual meeting,” he recalls. “Alan Greenberg was there; Howard Brodsky was there; Sandy Mishkin was there. They kept going around the pool with a piece of paper, signing people up. They were terrific guys, smart, honorable, so I invested a good portion of the little money my business had in Carpet One because I was sold on these three terrific guys. That’s how they got the first 13 members. It was very exciting, and if I had to do it again, I’d do it ten times over.”

When Pat came home and shared the news with his store managers, however, they weren’t as impressed. “They told him he was crazy for investing in an idea,” says Bill.

Bill and Michael are just as committed to the organization. Bill recently attended his 62nd convention-he hasn’t missed a single one since he joined the family business in 1988-and Michael attends as well.

AD APPEAL
Kerns’ television advertisements feature the three generations of Kerns men. Says Bill, “The ads primarily focus on us, and the fact that Kerns has been in business for so many years.”
Over the years, the company has had several slogans, including “Why don’t you come and see us?” and, more recently, “People have been walking all over us for 80 years, and we love it.”

In addition, the company is active on social media, primarily Facebook, Twitter and pay-per-click, working through Carpet One’s program, with which it has been very pleased.

PRODUCT MIX
Carpet sales are still fairly strong at Kerns “because we live in a climate with four seasons,” Michael surmises. “Over the last five years, we have noticed carpet dwindling, but this year, it’s probably up. And we’ve received a lot of bigger, higher-end orders. We see people putting higher-quality carpet in a room or two. A lot of residential building around here was done in the late ‘90s, early ‘00s-big homes on the west side of Milwaukee. The flooring in those homes has reached the 15- to 25-year point, and homeowners are changing it out. They see the price for 3,000 feet of hard surface, and they realize that they can put nicer carpet in for half the cost of hard surface.”

Michael feels strongly that better carpet is key, “We focus on quality rather than quantity. We’re not the biggest dealer, but we sell the nicer products in town. We sell a decent amount of wool and high-end nylon and very little polyester.” Carpet accounts for about 50% of sales at retail and 40% on the ProSource side.

Vinyl plank and tile are the biggest sellers at Kerns. “This year, vinyl is taking share from hardwood big time,” Michael reports. “But our climate is tough for hardwood due to our humidity levels and temperatures. Even with the proper systems, it’s still difficult to maintain the proper humidity levels.”

The labor pinch is painful in Kerns’ region. On the hard surface side-particularly in ceramic-the labor shortage is severe, so labor costs are very high, and Michael predicts that the area will soon be in the same boat with carpet labor. “Carpet installers will be tight in five to ten years,” he says. “We see some young people getting into hard surface, but in carpet it’s few and far between. Most young people would rather sit at a computer than work with a 300-pound roll of carpet at 7:00 a.m. People just don’t want to do tough work. Someone is going to have to find a new way to install carpet.” Kerns makes an effort to sit down with its installers three to four times annually and has a bonus plan, which is based on feedback from customers.

In addition to flooring, the ProSource business moved into kitchen and bath product sales about four years ago, including toilets, shower doors, faucets, sinks and vanities.

EXCEEDING EXPECTATIONS FOR 80+ YEARS
An impressive 72% of Kerns clients are return customers or referrals. “The most important thing I’ve learned in the more than 60 years I’ve been in business is to take care of problems,” says Pat. “Not every job is going to go well. This is a city where everyone knows everyone, and if you don’t take care of complaints, you don’t have much time to be around. There isn’t one store still around that was here when I started. Most of them either over-advertised or didn’t take care of complaints.”

In fact, the company recently had a customer who had purchased an expensive piece of Karastan wool carpet and was displeased with the seam, which was completed by a Certified Flooring Installers-certified installer. Kerns tore out the entire job and replaced it.

GOALS
Though the Kerns men share a vision for the future of the business, due to their varied perspectives, each has slightly different objectives for what they’d like to achieve in the near and long term. Here, they share their ambitions.

Pat Kerns, chairman
We have expanded recently, and we now have to come together and streamline our expansion with good operational moves to make the whole company more efficient and more profitable in order to face the future.

Bill Kerns, president
Short term-We must work to become more efficient by adopting and implementing technology. The process is a work in progress, and changes are needed in order to meet the needs of our staff and the expectations of our customer.

Long term-The long-term goal is for Michael to take over and become the fourth-generation owner. We have started the process by giving him more responsibility. It is my hope, and that of my father, that Michael will continue to develop and demonstrate his leadership capabilities.

Michael Kerns, store manager
Short term-In the coming years, I firmly believe that we will have to focus on two main points: customer service and quality. Today, big companies are getting bigger, and pricing is becoming more competitive. I believe operations that focus on price will get eaten up by the big box stores and Amazon.

Long term-My biggest goal is the responsibility for developing the next-and possibly fifth-generation owner. It might be my future kids or one of my brothers. Nothing would make me happier than to see another Kerns generation as passionate and excited about the business as I am.