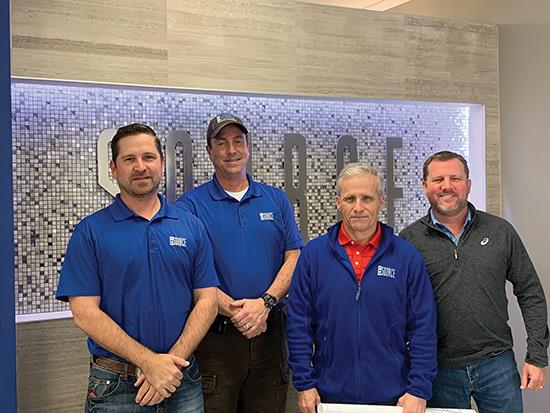 When a highly driven entrepreneur and a process efficiency specialist come together, the result is an organization that is dynamic, adaptable, reflective and responsive. That is the nature of the operation that cousins Scott Spencer and Jerry Kenney have created in Plano, Texas-based One Source Commercial Flooring, a contract dealer with a significant K-12 business.

BUILDING AN ORGANIZATION
Spencer and Kenney are first cousins who grew up more than 1,500 miles apart-Spencer in Texas and Kenney in Massachusetts. However, the pair maintained a close relationship throughout their early lives. When Kenney, seven years older, was stationed in Fort Hood during his Army years-he served as a combat arms officer-he would drive the two hours to Dallas for a family meal and TV time with his aunt, uncle and cousin, then return to base.

After the Army and college, paid for with an ROTC scholarship, Kenney settled into the corporate world. There, in the company of industrial engineers, he developed his skills in process improvement.

At the same time, Spencer was in Texas building an apartment complex floor cleaning business. “At some point,” explains Kenney, “someone asked Scott, ‘Can you do a change out [of flooring]?’ He took it on and discovered that to be a better business than cleaning, so he began to do apartment turns in the early ‘90s.

That opened up the opportunity for replacement in K-12 facilities, which Spencer found he really enjoyed due to the fact that the jobs were larger than apartment work and phased out over time. “And that’s how our largest segment was born,” says Kenney. “K-12 still fuels our growth.” The company also works in the healthcare, corporate and public space (worship and sports) sectors.

In 2003, Spencer asked Kenney if he would consider coming on to help him grow the operation, and Kenney joined One Source as part owner. “The chance to work together has been cool,” says Kenney of his partnership with Spencer. “I can’t imagine doing this without a partner. A partner gives you someone to bounce ideas off of. I’m a process guy. Scott is a real entrepreneur. He is very driven to achieve success.”

PERFECTING PROCESSES
Kenney wasted no time in putting his process skills to work for the business. “When I came to One Source, the first thing I did was sit down with Scott and draw a process map of how the company worked. I said, ‘Okay, this is what we do.’ Scott said, ‘This is nuts. It looks like a big bureaucracy company.’” Kenney mapped out every operation. For instance, he asked where the company acquired its Roppe base, then mapped out that process so that, for instance, new employees could see the system and quickly get up to speed on how things are done.

“How do you scale an organization?” asks Kenney. “One Source had no HR. No processes. How do you imitate [those corporate operations in a small business]? You have to look at how jobs move through an enterprise and say, ‘Okay, we have a problem here.’ With a map, you can easily identify bottlenecks.”

Because One Source is heavily involved in K-12 work, summer is its busiest season. After that time, the company conducts annual after-action reviews. “We come together and ask ‘What went right? What went wrong and needs to be fixed?’” says Kenney. “We believe that it’s always the process that is wrong, not the people. Out of that meeting, we choose three big problems and assemble a group who are experts in the area or involved in the area or passionate about it to form an improvement team, and that improvement team comes up with a better way to do it. Then they come back and present their solution to the stakeholders.”

Of course, there are problems that cannot wait until the after-action review and must be addressed immediately. When that happens, the team acts immediately and then, if needed, may address the larger underlying issue in the annual review.

Kenney modeled this process on what the Army does after it completes a movement and notes that there are many other companies that use the approach, as well.

In addition, Kenney is Lean Six Sigma certified and has studied how long it takes the company to complete every operation. For example, Kenny created a spaghetti diagram to study how company estimators spend their time daily and found that they were wasting a ridiculous number of hours weekly walking to the copy machine at the other side of the headquarters. For a minimal investment-the price of another copier machine-the company was able to streamline operations and save precious hours that could be applied to profit-producing efforts.

“The bottom line,” says Kenney, “is that we try to remove non-value-adding steps and make processes work as smoothly as possible. I can’t hire as many people as I want to get the work done, but I can get rid of steps that don’t make sense.” Kenny reports that this becomes especially valuable as job site timelines continue to shrink.

THE GAME PLAN
Says Kenney, “When I came to One Source, my philosophy was, we need to figure out how to minimize variables, which makes it possible to bring order to events that you can’t control.”

Structure is part of managing the unexpected, and One Source has a weekly schedule in place so that the team remains in sync. On Mondays and Fridays-without fail-the company has game plan meetings. “This meeting helps us understand what we are facing as a group,” says Kenney. “Job stops, material shortages, who is overworked and needs space. It’s a nice time.” In addition, the installation managers meet as a group each and every Wednesday.

The company also has what Kenney calls “the big, hairy, audacious goal board,” which is a strategy board outlining ideas for diversification or new approaches. “Our approach to entering new markets and segments is that we move carefully and make sure we acquire right skills and knowledge,” says Kenney.

BUSINESS PROFILE
From its headquarters in Plano, the company works jobs in North and East Texas, as far south as Austin and, from time to time, in West Texas. The company specializes in traditional floorcoverings. It has not diversified into additional offerings, such as poured flooring, though that is included on “the big, hairy, audacious goal board” as a possibility for the future.

The company reports that there is stiff competition in the Plano market, which One Source sees as a incentivizer. “We have great competitors,” Kenney remarks. “We’re in a market where you really have to be good because others are really good.”

Overall, the company believes that much of its success is rooted in the connections and relationships it has built. “After 26 years in the K-12 segment, we have partners-owners, general contractors, supply partners-that we’ve worked with for 26 years,” comments Kenney. “We also have good A&D relationships-sometimes they will call us for advice. So, we have those relationships, we are well known, and we pride ourselves on the ability to get job done.”

Ultimately, the company’s long-range goal and greatest challenge are one in the same: to continue to achieve controlled, orderly growth. “It’s hard work,” comments Kenney, “how you manage complexity and continue to scale a business.”

FIVE YEARS WITH FUSE
One Source joined the Fuse Alliance in 2015. “We are better for being part of Fuse,” Kenney believes. He is especially grateful for the access the organization provides to “world-class tech experts, as well as the ability to converse openly and learn from member companies. Kenney also has high praise for executive director Geoff Gordon, who visits the operation in person from time to time. “He’s a unique resource,” says Kenney.