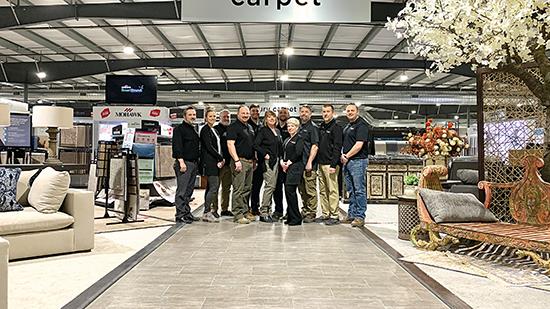 National Design Mart, a $45 million Ohio-based operation run by brothers Chris and Ryan King, has found success in investing heavily in its showroom, infrastructure and people. The business operates from an expansive 150,000-square-foot showroom in Medina (just south of Cleveland), Ohio, with satellite locations in Wooster and Cincinnati. It is comprised of retail, builder, multifamily and commercial operations, which each account for around 25% of the company’s flooring business. In addition, National Design Mart has significant countertop fabrication and cabinet offerings.

ORIGIN STORY
Dennis King, father of Chris and Ryan, and his brother started a flooring store in Akron, Ohio in 1968. By the early 1970s, the brothers had split, and Dennis moved to Wooster where he continued to focus on his retail flooring business, launching the National Design Mart brand in 1998.

When Chris, the elder of Dennis’ two sons, joined the business, he found that he enjoyed the commercial and builder operations best, so National Design Mart began growing that side of the business. Ryan signed on with his father and brother in 2002. Around 2005, the Kings opened a second location in Medina, and, at that point, the commercial and builder businesses really ignited. National Design Mart added cabinets in 2008 and, the same year, launched a countertop division at the request of its builder clients seeking single-source suppliers. Today, the cabinet business is 60% retail and 40% builder; the countertop business is split evenly between the two segments.

Eventually, National Design Mart was operating out of four different locations in Medina and, explains Ryan, “We had grown so tired of the logistics that we decided to find a piece of property to bring all the operations under one roof.”

However, while the last moving truck was still sitting outside, Ryan realized that they had underestimated their space needs, and within six months, National Design Mart was breaking ground on an 80,000-square-foot addition. The current warehouse has 18 dock doors, six of which are designated exclusively for pad deliveries, and receives an average of 12 truckloads of products daily. The company stocks around $10 million of inventory.

Today, Dennis is largely retired. Chris is focused on the countertop business, while Ryan concentrates on the floorcovering side.

THE SHOWROOMS
National Design Mart’s Medina showroom is spacious and design forward, accented with furnishings and décor to create a truly residential feel. The retail store features a supervised children’s play area as well as a complementary café. “Retail, for us, has always been the core,” says Ryan. “We enjoy it. That’s what we started in, and we built our facility as a destination. That’s how you win, by creating an experience.” The flooring showroom is comprised of a carpet area with both traditional sampling systems and a roll zone of in-stock product. It also features expansive porcelain, luxury vinyl tile, laminate and hardwood departments. In addition to the indoor slab yard and cabinet offerings, National Design Mart dabbles in furniture sales.

The company’s Wooster showroom, which was the business’ original location, has most recently operated as an outlet center, but with the building aging, the Kings decided to pursue a new location and concept. The Wooster branch will become a boutique location with a curated offering, merchandised differently than at the home base. National Design Mart will service Wooster clients out of the Medina location.

Lastly, the company has a Cincinnati location for its builder, commercial and multifamily operations. As its commercial and multifamily work grew, the company moved into a 15,000 square foot facility and found itself out of room within three months. It relocated to a 40,000-square-foot space and has a team of around 15 who work out of that office.

NEW SPOKESWOMEN
For years, Ryan has believed that National Design Mart needed a spokesperson for its TV spots-a face and personality with whom customers could connect. Recently, the Kings decided that one of the business’ own interior designers would be perfect for the job. Brooke Howell has been with the company nine years and, while nervous, was willing to take on the new venture. Brooke’s first commercial can be viewed on the company’s Facebook page.

INVESTING IN THE FUTURE
Just as the Kings have invested in creating top-notch, consumer-facing facilities, they invest in their infrastructure and team. National Design Mart recently established an in-house marketing team comprised of a marketing director (who has been with the company for around 15 years), a graphics specialist and an online specialist. Like most in the industry, National Design Mart formerly partnered with an outside marketing company, and while Ryan reports that the agency did a good job, he was bothered by how long it took to move concepts to completion. In addition to the added salaries, there were other costs associated with moving marketing in-house-including the purchase of a drone and camera equipment-but the payoff has justified the cost. “I can tell the team that I want to shoot footage for a commercial and have it done tomorrow,” says Ryan. “When you have the ability to control things completely, it makes the job easier.”

In addition, National Design Mart has a seven-person in-house interior design team that works alongside the retail sales associates to assist customers with their design projects. All design services are complementary and include sophisticated offerings, such as 3D, shower and installation renderings. “We have been offering our design service for about six years,” notes Ryan. “The consumer is in the love with the idea, and I wouldn’t have it any other way.”

Additionally, the business has about 15 crews of installers who are National Design Mart employees, working out of company vans with company tools and, in addition to their wages, earning healthcare benefits and 401Ks. The company also runs an apprenticeship training program that, over the course of the last three years, has generated two new hard surface crews and two new carpet crews. “Our people are a huge asset,” says Ryan. “You have to have good people to move ahead in business.” In addition, on a daily basis, the company also has around 250 subcontractors in the field. National Design Mart has a seasoned installer that visits every job site to ensure that every installation is up to par.

National Design Mart also operates its own trucking fleet. And due to its significant stock and well-oiled logistics system, it can address quick turnaround jobs in a timely manner. “When a customer needs something quickly, we will jump through hoops to do it,” explains Ryan.

THE GOOD OLD DAYS
Ryan feels that the flooring industry has gotten more competitive over the decades and misses the days when there was greater cameraderie among retailers. “Twenty years ago, this business was cordial, but today it is very cutthroat,” he notes. “I miss the days when you could call industry friends, and everyone was on the same page. But that’s business today. You have to find your niche and go after it, provide great pricing, service and installation.”