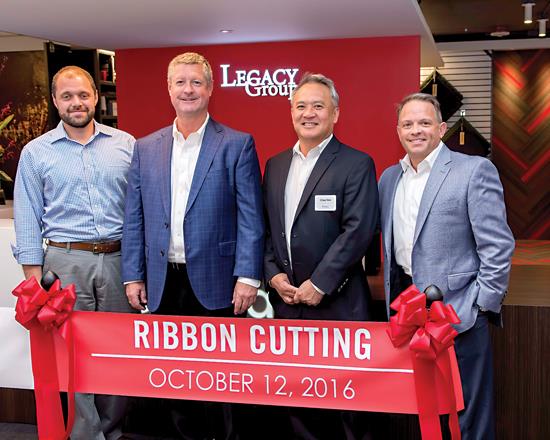 Legacy Group lives by the motto, “Radically honest and transparent.” It’s a bold approach that has served the firm well. In only two decades, Legacy has grown into a $32 million business offering a unique proposition to Seattle-area businesses: turn-key flooring and furniture installations done in off-business hours.

In fact, 75% of Legacy’s work is completed at night, and it’s easy to understand why a broad range of commercial clients would find this approach appealing. Workplace disruption equals dollars lost. How much better to hand the keys off one evening and come in the next morning to a workplace transformed?

Working at night isn’t just a boon for the customers, reports John Finch, co-owner of the Legacy Group, it’s “tremendously more productive” for the installation crews as well because foot traffic does not impede progress.

GETTING HERE
The paths that Finch and his partner Lou Lanthier traveled to reach this destination are somewhat atypical. Finch got his start not in installing carpet but in removing it. In the early ‘90s, Finch, a firefighter by trade, broke up with the girl he’d been dating since the age of 13. On the “off” side of the three-days-on-four-days-off firefighter schedule, Finch was bored, so he started hauling trash in the bed of his pickup for extra cash.

After a week, Finch and his girlfriend-now wife-got back together, but Finch’s new venture had made an impression. A year later, he quit the fire department to pursue the hauling business full time. Soon, he began transporting used carpet, then removing it as well. In 1995, he developed a hydraulic lift system to raise cubicles so carpet could more easily be removed beneath them. “That’s when things started taking off,” he recalls.

In the mid-nineties, the commercial flooring operation that Lou Lanthier had been running in Denver, Colorado, called Kahn and Company, was purchased by Shaw as part of its Spectra program; Lanthier then moved to Seattle to run a different Spectra commercial flooring operation. He and Finch teamed up at an associate’s computer and technical furniture company, then decided to leverage their shared strengths in flooring. The pair began building an installation service organization catering primarily to furniture and flooring dealers. Eventually, in a testament to Legacy’s good reputation, commercial customers began cutting out the “middle man” dealers and going directly to Legacy with their flooring and furniture needs.

FRIENDER, NOT VENDOR
With a culture dedicated to honesty, Legacy focuses primarily on negotiated business, rather than bid work, because that allows the organization to position value rather than cost at the forefront of dialogue with the customer. A large part of that value is the company’s seasoned installation team. Legacy’s installers are all employees-cross-trained in flooring and furniture-and Legacy is committed to providing each with a living wage. “We really do care,” says Finch. “We care about doing good. Doing good benefits everyone; we’re win-win oriented. I want my people to be happy, and I want to feel comfortable checking in with them and asking how we’re doing.”

Because of this win-win approach, Legacy seeks likeminded customer partners who understand its commitment to doing things the right way. Finch points out that his approach to partnerships can be summed up by the caption of a Dilbert cartoon he saw years ago, “I’m not a vendor; I’m a friender,” adding, “We want to make sure we are giving customers everything they need. We want to take care of them. We don’t want to cut corners.” Once these partnerships have been established, they often stick. For example, Legacy has been under contract with one large software developer for 15 years-and is the only vendor to have achieved such a distinction.

Legacy is aggressive about achieving financial freedom as an organization and is all about paying it forward on that front as well. “We have zero debt, and we have always worked out payment terms with our customers to help them do the same,” explains Finch. “This allows them to elevate their cash flow. It’s about controlling your own destiny. And, on the vendor side, we work with companies who want to work with us, and we don’t beat them up for better pricing. Rather, we might ask, ‘How do we earn a better price?’”

OFFERINGS
While carpet tile is Legacy’s key category, the company offers LVT and ceramic products as well. “If it’s square, we’re there,” Finch says with a laugh. LVT and ceramic each account for 15% to 20% of business, with the balance going to carpet. Finch reports that Legacy is the largest dealer for Interface worldwide.

Legacy also offers an in-house design team that does space rendering and creates CAD plans, and the company became a Kimball furniture dealer in 2002.

In addition to renovations, Legacy also does de-commissions (deconstructing and removing office spaces) and is highly committed to recycling what it takes out. In 2018, it recycled more than three million pounds of carpet and believes it is the largest single-source carpet recycler in the country.

THE HUNT FOR TALENT
Attracting new talent to the flooring industry is a significant challenge across the industry right now, but selling jobseekers on the idea of installing floorcovering at night presents an even greater hurdle.

Finch believes that the key to attracting young people both to his firm and the field in general is offering them not only a job but also a future. “Millennials and Gen Z want to have a career path,” he says. “If there is no path, they lose interest, so we have a program that incorporates training, mentoring and coaching.”

DOING GOOD
Just as the organization seeks to do right by its vendors, employees and customers, it has a strong commitment to helping the community. Legacy has established relationships with several charities, including Food Lifeline and Humble Design. Food Lifeline delivers truckloads of food to elementary schools in the lowest income areas of Seattle and allows students to “shop” for what they need. Humble Design creates homes for families who have recently come out of homelessness, providing welcoming, pleasing environments using donated goods.

Both Lanthier and Finch are highly committed to giving back, and, in fact, Finch expects to commit a significant portion of his retirement to community works.

THE COMING YEARS
Lanthier will retire in about a year and a half. Finch plans to stay on for another four or five, though he doesn’t think he’ll ever fully step away from the business. “I’m happy. I love the business. I have no immediate need to retire,” he says.

Lanthier has four sons, and three are already working at Legacy. Finch has two kids, a daughter who is 22 and a son who is 17. He’s not sure what’s in store for them in the coming years but he’s not worried about it either. “If I can teach my kids anything, it’s to be good people. Opportunities will come,” he says.

Finch has hired an individual to take over some of his day-to-day duties, so he can take over some of Lanthier’s, and his greatest hope for the business is that it be a legacy for those who work in it-something they can all be proud of.

Finch remains committed to attracting new customers who appreciate Legacy’s services and its approach, but he’s also dedicated to maintaining the life-work balance he’s always nurtured. “I’m home for dinner every night,” he says. “I don’t work at home. I have stayed married this long because I try to be present.”

CITY WORKSPACE FOR A&D
In order to get back to what Finch describes as “old school business,” Legacy Group built a workspace in downtown Seattle that houses a design resource center with flooring, furniture and paint samples.

“Architecture and design firms are shrinking their libraries,” says Finch. Legacy found a location central to the city’s design firms and established the space for their use. It is open to the trade only. The space is used for designer client meetings, CEU training, charity events and manufacturer product launch parties. The slogan for the space is, “Meet. Collaborate. Innovate.”