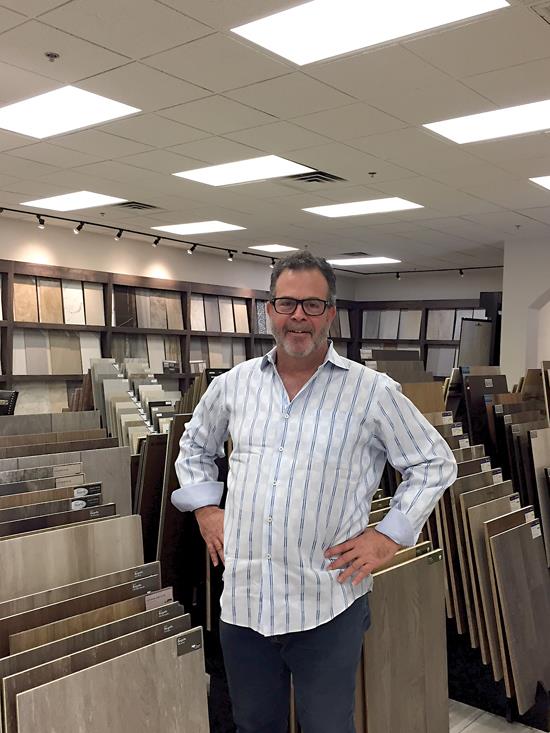 Carpets N More was on a path of rapid growth under the leadership of Steve Chesin until the recession hit and brought business to a squealing halt. Based in Las Vegas, one of the U.S. cities most severely impacted by the downturn, Carpets N More saw its staff drop from 500 to 100 and its annual revenue from $100 million to $10 million. Interestingly, the company found its way out of the calamity by investing and diversifying, even in the lean years. Says Chesin, “We had to reinvent the company to become more important to our loyal customers. We ended up acquiring a granite fabrication business in 2007, and then we got into the cabinet business and window coverings.”

THE UPS & DOWNS
Steve Chesin came from an entrepreneurial family-his parents owned a small casino-and he started his first flooring business, Steve’s Floor Covering, at the age of 18 before he’d even graduated from high school. The business did both installation and inspection.

In 1995, he sold Steve’s Floor Covering to Nation’s Flooring and was named COO of Nation’s retail operation, Carpet Barn, which operated in seven states-both in the West and along the Eastern seaboard. Then, in 2002, he joined Carpets N More, where he was later named president and CEO. He was also given an equity position in the business. In a handful of years, Carpets N More grew from $10 million in sales to $100 million. This growth was propelled, according to Chesin, by the fact that Las Vegas “had really exploded. It was growing so fast. We were primarily focused on the single-family builder business, but we also had a retail component. We grew the business by taking marketshare and really controlling our labor. There wasn’t a lot of great competition, and we had a winning team.”

Of course, when the recession hit, homebuilding, which accounted for a large portion of Carpets N More’s business, all but ceased in Las Vegas. And, as was well documented in the media, large neighborhoods of homes actually stood empty, uninhabited and unsellable. “We went from 36,000 new home closings a year to 3,000,” says Chesin. “Our business shrunk. Within three years, we were down to $10 million. We had a super store and big locations before the Recession and had to work with landlords to get our leases cut or reduced. Even after reducing by 400 employees, everyone had to take pay cuts. I didn’t take a paycheck for over six months. Being an optimist, I thought it would turn around. Ultimately, my supply partners, customers and employees helped me navigate through. And I learned more in the downturn about business than I’d learned in my whole career until then.”

LOOKING LONG
Chesin lists dealing with the United States Trade Representative’s new Chinese tariffs as one of the two greatest challenges facing his business and, more generally, the flooring business. “This is brand new and a big concern,” he notes.

Margin deterioration is the other area of stress. “My long-range goal is to grow profitably and increase margins across all products, keeping the overhead in check,” Chesin reports.


NEXT STEPS
In the years since the recession, the Las Vegas housing market has since bounced back with real stamina. Empty homes and neighborhoods have been absorbed, and, according to Chesin, about 5,000 people move to Las Vegas monthly for its favorable tax environment, climate and overall affordability.

And, of course, with all that population growth, the commercial market is booming as well. “This year, there will be over $25 billion in commercial business new project starts in the Las Vegas area,” reports Chesin.

Today, builder work still accounts for the bulk of Carpets N More’s business at 80%; its commercial and retail businesses each account for about 10%. The company, which went public on Nasdaq in 2015, sells all types of flooring, though ceramic is its largest category, as is expected in the desert climate.

Carpets N More is a non-union firm, which means that it cannot work on The Strip. However, Chesin reports that his firm does “a good portion of the vertical work off The Strip. We have very strategic partnerships with several general contractors. We are their preferred finishing contractor.” Carpets N More works with DR Horton, KB Home, Lennar, American West Homes and Beazer Homes, among others. Chesin reports that Carpets N More has a presence in over a third of new homes built in Las Vegas.

To assist in this and other goals, Chesin brought in a COO two years ago, who had previously served as vice president of construction operations for KB Homes. Chesin notes, “He helped me reorganize the business, organizing all the companies I had bolted on into one and creating synergies across all the divisions.”

In addition, Chesin is very proud of the fact that Carpets N More’s sales team has over 300 years of combined flooring experience, and its leadership team has been working together for 30 years. Chesin has himself spent 41 years in the flooring and finishing business.

THE FLOOR EXPO CONNECTION
Chesin was a founding member of Floor Expo, the buying group to which Carpets N More belongs. In addition to sharing best practices, he believes that creating relationships with the most successful flooring contractors in the business today is key for when industry consolidation happens.


THE LABOR CHALLENGE
Carpets N More employs 99% of its installers. “Though the costs are higher, we are trying to do all we can to secure our labor force by offering benefits and locking them up,” explains Chesin. Most of the installers Carpet N More brings in already know the trade when they’re hired; less experienced tradesmen are put with a crew for training and development.

Interestingly, the labor constraints in Las Vegas are so severe that Chesin has put a moratorium on promotion of the business, for fear they’ll have more than they can handle.

Chesin serves on the board of the Nevada Subcontractors Association, which seeks to bolster workforce development. “The labor challenge is severe in all trades because of the aging labor force,” says Chesin. “The Nevada Subcontractors Association works on workforce development in schools, getting more people interested in the construction trades. We have been doing this for years and are creating results, though not quickly enough. The average age of an installer today is 38, and there is not a lot of young talent coming up.”

Chesin points out that manufacturers and national homebuilders have a significant stake in this situation as well and believes that all the stakeholders need to be seeking creative solutions, noting, “We need to work with suppliers, manufacturers and builders to help fund schools to get kids in and learn a trade-along with going to college.” The conceptual schools would focus not just on flooring installation but on all the trades. Chesin believes this is not just a viable long-term solution but a great business opportunity as well.

On the staff side of the business, labor shortages can be equally challenging.

Chesin notes that retention is key to success on the showroom and administrative sides of the business when the unemployment rate is as low as it is currently.

DALTILE HONOR
In August, the Daltile Statements Program named Carpets N More as its Statements Dealer of the Year for 2018. The program recognizes top Daltile dealers across the U.S.