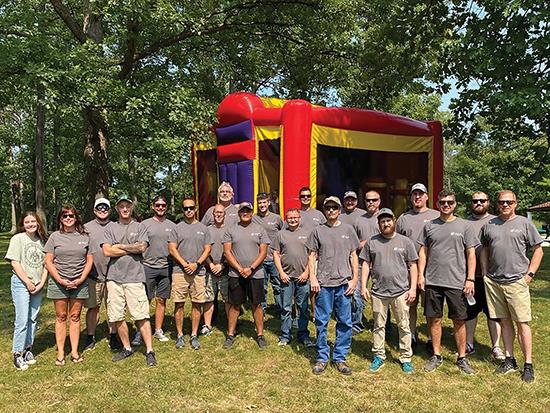 In January 2021, Scott McDonald purchased Lansing Tile & Mosaic, a full-service commercial flooring contractor based in Lansing, Michigan. McDonald had no background in flooring specifically, but he did have extensive experience in building products, having spent 20 years with Owens Corning. McDonald left Owens Corning in 2009 and moved through a series of positions where he was brought in by private equity to oversee operations of building product companies in transition, generally in top marketing, operations or sales roles. But, during a stint in Texas serving as CEO of a startup, he decided that he was ready to move back to Michigan, his home state, and do something for himself.

McDonald created a list of the types of businesses he was interested in buying, all of which were in building products, and commercial flooring was on that short list.

After having looked at ten or so businesses in segments he was interested in, through his network he was introduced to the founders of Lansing Tile & Mosaic, Casey Flietstra and Steve Zanella, who were seeking a buyer so that they could retire.

THE TRANSITION
McDonald spent a month considering Lansing Tile & Mosaic before signing a letter of intent. He then set out to do the due diligence and “dig around under the hood.” Because Flietstra and Zanella wanted to keep the potential sale low key, McDonald only met three key employees in the business before he took ownership.

However, he did feel that he was able to get an authentic feel for the operation prior to closing. “I got a sense that it was very people-centric, which fits well with me,” recalls McDonald. “I heard things like, ‘We’re a family,’ and ‘We take care of each other,’ and ‘Our number one objective is to keep everyone working.’ So, there was some good esprit de corps. After I bought it, there were a few rough weeks without much trust. I had to work hard at building that and proving I was there for the right reasons. Because of my background in venture capital, there were some rumors that I would buy the business and flip it, which was not my intent. I told my team, ‘I chose Lansing Tile because of the company you guys have built. Now I’m here, and my job is to create as bright a future for everyone as I can, polishing what we have and modernizing.’” In spite of McDonald’s reassurances, he reports that a few employees decided to leave when he took ownership; however, a couple of those have since returned.

McDonald, Flietstra and Zanella agreed on a clean transition between the two ownership groups, though one of the former owners did stay on board for several months to complete projects he was working on. Both have made themselves available to help McDonald, as needed.

Lansing’s core market is about an hour radius around its home base, and after 38 years in business, it had an established list of customers, including some in Ohio and Indiana.

McDonald’s first step in letting customers know about the ownership change was to reach out, via post and phone, to explain that the purchase had been a stock sale, so the legal entity remained in place and contracts would not need to be renegotiated. “That was a great comfort,” says McDonald. He further explained that the management team that had been operating the company remained in place, and he shared his own experience in building products.

In spite of his proactive approach, he still faced challenges. One competitor spread misinformation about McDonald, saying that he was working with private equity and would drain the business of its assets and cash out. McDonald addressed the misinformation directly, as he had with his team.

Says McDonald, “The need to get the people part right with a succession is key. That’s the magic, especially for a company like ours, 38 years old and still operated by the founders. A lot of people are invested in that relationship, and I needed to address the question, ‘Who is Scott, and what are his intentions?’”

POLISHING
As a non-union shop with in-house laborers, Lansing is unique in its market. “We outsource very little,” says McDonald. That labor structure was in place when McDonald stepped in, but he has since modernized many other operations across the company, including with compensation, benefits and estimating. In addition, he brought in his daughter, a recent college graduate with a marketing degree, to develop an online presence. Previously, the company had no presence online-not even a website.

While purchasing a business amid a pandemic may have flustered many, McDonald was largely nonplussed by the idea. He says, “I’ve never done things conventionally. Whereas some may have been frozen by the risk of buying in a pandemic as well as buying a people-centric business without meeting all the people, at the end of the day, buying a business is a roll of the dice. You try to deal with those unknowns the best you can, and the pandemic created more unknowns. But I had confidence-having studied up on commercial flooring and knowing what I do about commercial construction and building in general-that there was and is and will continue to be demand for our services and the product we provide, a finished surface.”

As you might expect, McDonald has his eyes on growth. He is looking to hire more employees. In his first meeting with his employees, he said, “The only thing I know for certain is that everyone wants more next year, and the only way to do that is to create more.”

Adds McDonald, “We have a lot of long-term employees who have created a culture of quality, service and flexibility, and that serve the customer mindset.”

BUSINESS PROFILE
Lansing Tile focuses heavily on K-12 and higher education, workplace and mainstreet work. It does a fair bit of industrial, warehouse and healthcare too. In hospitality, it provides product for lobbies and kitchens but not guest rooms.

Lansing Tile’s location includes a design center showroom. The company does a fair amount of negotiated work, and design services are an important component of this, especially for churches and offices.

The company works in all flooring categories, including epoxy and niche polished concrete work. McDonald describes Lansing Tile’s areas of expertise as “all things hard tile on floor and wall.” He adds, “We have a highly skilled craftsman for sheet vinyl work for healthcare and education. I would say that a third of guys are hard-tile craftsmen, a third are focused on carpet and resilient, and the last third can do everything, which is very valuable to the company. It’s part of how we keep our guys working-the tile setters who are slow in winter will lay carpet tile. It’s beneficial for the employee most of all, but also for our customers.” With construction schedules so disrupted today, this flexibility is even more important.

Years ago, Lansing Tile had a full-time trainer on staff. Prior leadership abandoned the program in the recession, but McDonald is putting it back together, though he hasn’t completely decided how yet. “We are very committed to training, to sharpening the saw no matter how long we’ve been at it,” he says. “We have a mindset of constantly training and developing. And our workforce is open to that. Everyone understands that, at some level, their pay is tied to their skills, and their skills allow them to have a bigger impact on the company.”

Lansing Tile has long had a program for profit sharing, but it has been somewhat loose in structure. McDonald seeks to clarify the details more clearly. “If you are doing your job and performing well and making a contribution, I will find you and reward you,” he says. “The team now understands that’s how I operate, and over time, that will raise our performance as a company because of collective results of the team. I view it as an investment in others.”

In addition to sharing the profits, McDonald wants Lansing Tile to be viewed as an employer of opportunities, “I have a next generation of guys who have proven they are capable of handling leadership roles, so we have to create opportunity for them to do that. I want them to see a bright future in a career at Lansing.”

Every three or four months, Lansing Tile hosts a family day. The one pictured at the start of the article was held at a local park next to the zoo and included a bouncy house for kids, a barbecue lunch, competitive games and a Good Humor ice cream truck handing out treats. McDonald believes it’s important for his whole team-often scattered across job sites-to get together frequently, and he also believes it’s important for him to get to know his employees’ families, to whom he feels a responsibility.

JOINING STARNET
McDonald describes Lansing Tile, under prior ownership, as an “incredibly successful business that operated on its own island with its head down, not connected to larger industry other than in personal relationships.” As the new owner, he sees great value in connecting to others in the industry doing the same thing, and, as such, since McDonald took possession, Lansing Tile has joined by Starnet and FCICA. “All of that is really about plugging into the industry to make sure we are tuned into trends and best practices and getting as broad a sense of the playing field as possible and applying that to our local market,” says McDonald. “We want to be a participating citizen in the industry, and want to give, too.”

Starnet’s May meeting was his first event with the group, and he took one of his senior employees with him. Thus far, he is “wonderfully pleased” with both organizations.