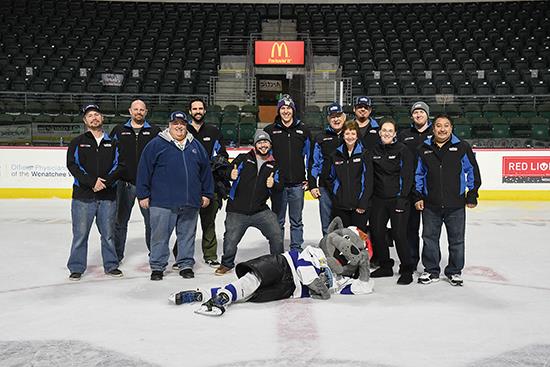 During the same time, as part of a high school class assignment, Don interviewed with Sears; the interviewer told him, “If you ever need a job, come talk to us.” This was around 1980, when inflation rates were very high, and, as a result of the trying economic times, Don’s uncle was forced to lay off staff, Don included.

Looking for a job to do while in college, Don reached out to Sears and was offered a position in hardware. When the store found out he had experience in paint, they scheduled him in that department too, and eventually, he was running the hardware department during the day and the paint department at night.

From Sears, he moved to home improvement chain Pay ’n Pack, which offered flooring, and worked his way into management. After nine years, Pay ’n Pack asked him to move from Spokane, Washington to Sacramento, California.

However, within two days, Don experienced two life-altering events: his first child, Nicole, was born, and his grandfather died. Don knew that he didn’t want to leave Washington, moving his wife and newborn daughter away from family, and, fortuitously, his uncle offered him a job at Ramey’s again.

“I worked for my uncle for four years, but my ambition was to own my own business,” explains Don. “I told my wife, ‘I can’t do this anymore. I feel like I’m stuck. I want to move ahead.’” At the time, Don was calling on the Chelan area for his uncle’s business, so he went to his uncle with a plan to open his own branch of Ramey’s there.

In 1998, Don’s uncle and his uncle’s partner agreed to help Don get the store open, with a plan for Don to buy them out in three to five years. In year four, Don’s uncle and his partner went through a business divorce, in which they split the paint and floorcovering businesses. Don saw this as an opportunity to give his business a new identity and changed the name from Ramey’s at the Lake to Lake Interiors Paint & Floorcovering. In 2001, after being a Mohawk Color Center, it joined Alliance Flooring’s CarpetsPlus Colortile group.

BRANCHING OUT
The Lake Chelan valley is small, with only 6,500 permanent residents, but swells to 35,000 in the temperate months, with many coming from Seattle and other areas to spend time in summer homes and vacation rentals. Nestled in such a small community, Don found business challenging in the winters.

Don talked to a couple of friends who were insurance adjusters, and they advised that he should start taking on water damage work himself, doing everything from the dry-outs to the flooring replacement.

To launch the new venture, Don asked his brother-in-law to join him for a few years. The pair got trained in Helena, Montana, leased about $25,000 worth of equipment and got to work. Business proved vigorous. “In winter of 2003, we had 28 jobs going at once,” recalls Don. “BiIl and I were working 16- to 18-hour days, six days a week.”

Don likes the water restoration business because it is recession- and winter-proof. “When a pipe breaks, it breaks,” he says. What’s more, damage has to be dealt with as soon as possible, or it can compound.

TURNKEY
Lake Interiors began in the flooring business with carpet and sheet vinyl-the standard residential offerings of the time. It also carried paint, window treatments and cabinetry. In 2004, it dropped paint, and today, it offers a full range of floorcovering, though its area rug offering is small, mostly bound in-house from remnants.

Lake Interiors is focused on being a turnkey solution for customers looking for residential remodel work. In addition to window treatments and cabinetry, the company also partners with a countertop fabricator for granite and quartz countertops and, in addition, has a relationship with Ferguson for plumbing products, including sinks, faucets and shower components. If a customer comes in to remodel a whole bathroom or kitchen, Lake Interiors facilitates installation of the components it doesn’t carry so that the customer only has to work with one group.

Currently, ceramic is the largest flooring category for the firm, comprising around 36% of flooring sales, followed by LVT (30%), carpet (22%) and hardwood (12%). Of its product offerings, flooring accounts for around 70%, while window treatments account for about 20% and cabinetry for around 10%.

Don adds, “If you aren’t moving forward and are getting stale, you leave an opening for someone to come and take business away from you. I tell that to my employees and kids. You always have to look for the ways you can complement your business and move forward; look for opportunities but also identify your wheelhouse. We don’t put more than 10% of our eggs in one basket. We’re very diversified, so if we take another hit like we did in ‘08 and ‘09, we will survive again.”

The company does very little commercial work and what it does do is mostly mainstreet.

THE TEAM
Lake Interiors has 22 full-time employees, including a core group of installers, and two part-time employees. Everyone in the operation is cross-trained, and that is a key strategy for Don in keeping the full team productive and busy. Warehouse team members are trained in water damage restoration. Water damage restoration employees are trained in demolition. All employees are hourly; none are commissioned.

In addition to its core team, Lake Interiors partners with around seven sub-contractors, some of whom are in flooring and some who are in other fields, like sheet rock installation.

Don is always on the lookout for good employees. In his 28 years of business, he has never placed an ad for an employee, but instead relies on word-of-mouth and community connections. For instance, four of Don’s employees were members of his daughter Nicole’s graduating class; another was a Mohawk rep looking for a career change; two others were members of a high school shop class, directed toward Lake Interiors and a career in installation by the instructor. In addition, Don and Jon do a 15-minute radio show on a local station twice monthly, and if Don is looking for help, he will mention it there.

At this point, Don notes, “We’ve gotten a lot younger over the last four to five years. Half of my staff is between the ages of 28 and 32.

“We have an awesome team of employees. On almost every job, the homeowner or maintenance supervisor will say, ‘Your guys are great. They clean up after themselves. When the customer walks in, the place is vacuumed and everything is turnkey.’”

TODAY’S CHALLENGES
2021 was a record year for Lake Interiors, yet Don reports that it was the hardest he and his team have ever worked due to the challenges brought about by delays and other difficulties created by the pandemic and resulting supply chain challenges. However, compared to 2020, Lake Interiors increased sales by $1 million with the same-sized team.

While Lake Interiors used to work on a three-week schedule for installation, today that has extended to six to eight weeks. “If we could get materials like we used to, we wouldn’t be able to install them anyhow,” says Don. “I’m really picky about installers. We won’t lower quality for a job. Customers will wait for quality.”

He continues, “Keeping up with demand is one of the biggest challenges that we have. Our purchasing agent spends three times as much time as she used to on the phone tracking merchandise. Scheduling changes daily, sometimes by the hour or minute, because of all the delays on the job site, or because the painters didn’t show, or because they couldn’t get paint. Freight is another huge issue. We can’t track merchandise anymore. The trucking industry is so short of drivers that they give it to another company and then you can’t track it.”

In spite of the challenges and the fact that Don and Laurie know that Nicole and Jon will one day take over the business, Don isn’t ready to step aside. “I’m 60. I’m going to do this as long as I’m having fun,” he says. “I love helping people. Everything we do has a positive impact on people’s life, and it’s very rewarding. As long as I feel good about that, I may never retire, but I do want to slow down eventually.”