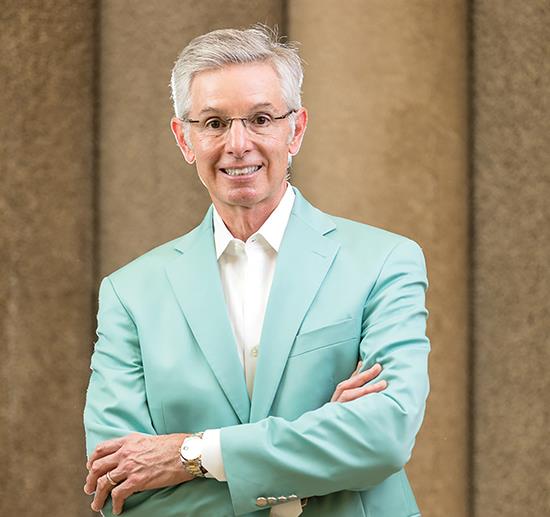 In 1998, Paul and Ronda Johnson purchased a single Carpet One store in Tulsa, Oklahoma. Today, the couple has grown the Johnson Floor & Home operation to five storefronts-four in Oklahoma and one in Missouri-with a total of $25 million in sales. The business is amid a transition currently, as the Johnsons’ twins, daughter Christina and son Palmer, have stepped in to, ultimately, take the reins and move the business into its second generation of leadership.

THE EARLY YEARS
Paul went to college in North Carolina-where he met Ronda, a North Carolina native-and worked in the warehouse of a small-town furniture store to make ends meet. Like many furniture stores of the day, this one also sold flooring. Paul quickly realized that the carpet installers were making better money than he was, so he set out to learn the trade.

In 1978, Paul started his own flooring subcontracting firm in Laurinburg, North Carolina, and in 1979, upon graduation from college, he was offered a job by carpet manufacturer Horizon Industries, which saw Paul as a great candidate since he possessed both a college degree and flooring product knowledge. He was later recruited by World Carpet as regional vice president and transferred to Oklahoma in the early 1980s. Horizon was acquired by Mohawk in 1992, and World was acquired by Mohawk in 1998-the same year Paul left to purchase his retail store.

THE GROWING YEARS
Though he was new to the retail side of the flooring business, Paul soon set his sights on growth.

In Tulsa in the late ’90s, the majority of the flooring dealers were located within a few miles of 41st Street and Sheridan Road. “I felt I needed a location away from that area to break the hold,” recalls Paul, “so, I began opening stores in the surrounding areas. Everyone thought I was crazy.”

In spite of the skepticism, Paul persevered and success followed. “Over the years, I have purchased a number of smaller retailers and absorbed the businesses and buildings into our company. I purchased a building that was previously a skating rink in Owasso, a suburb of Tulsa, and converted it into a flooring store. I have built two stores from literally the ground up.”

ADAPTATION
Johnson Floor & Home is a diversified business with retail accounting for 75%, builder accounting for 20% and commercial making up the rest.

The business carries all the flooring categories, except in-stock area rugs. Through the early 2000s, the company had a large area rug department, but today, as rug sales have gone to the big boxes and online, the company focuses on bound area rugs, which it produces in-house.

While the company doesn’t have any non-flooring categories at present, Paul reports, “We are looking at cabinets and window coverings for growth. There are many things that seem to make sense.”

Advertising-wise, the company has also seen a transition over the years. “Traditional [media] continues to work well in our market, TV and radio particularly,” says Paul. “We used to do newspaper inserts every other Sunday, which was huge for us 15 years ago but isn’t anymore. We still use direct mail and digital. We start with the CCA program and then we take that and modify it for our personal use and needs.” Today, Paul oversees the advertising budget, but Palmer handles all other aspects of outreach.

SUCCESSION
It’s no secret that hours are long for business owners. While Paul and Ronda’s twins were certainly exposed to the business early on, the couple let the kids go their own path and didn’t encourage them to follow in their footsteps. Initially, says Paul, they had zero interest in the business.

He and Ronda were surprised, then, when Christina, who studied business and entrepreneurial studies at Oklahoma State University, expressed her interest in joining the family venture. Ultimately, she did so right out of college in 2007.

Palmer took a longer route, attending the University of Tulsa for undergrad, then completing law school and practicing in the field for five years, during which time he spoke to his friends about his desire to open his own business. His friends responded, “Your family has a great business. Why would you want to start something else?”

When Palmer finally expressed his hope of joining, Paul put him off, telling him to take time and consider whether it was what he really wanted to do. It was, and in 2015, Palmer joined his father, mother and sister at Johnson Floor & Home.

Christina began on the retail floor, learning the business, and soon saw opportunity in the builder division, which, at the time, consisted of just a few accounts. She asked to take charge of the division and, in the ensuing years, has grown it to six times what it was. Under Christina’s leadership, Johnson has become “probably the dominant builder supplier in our marketplace,” says Paul. “All of operations people report to her, along with sales and order entry.”

Ronda oversees one account for a production builder, as she has done for many years; she has been working remotely in the role for over a decade.

Palmer, a Future Focus 2020 winner, is responsible for product and merchandising on the retail side of the business, along with Eric Wooten, general manager, who has been with the business for more than a decade.

The loose plan is for Christina and Palmer to take over fully in around five years. “It has been a step-by step-plan,” says Paul. “We started five years ago with them coming in and making sure this is what they want to do. This year, I wrote a list of what my job responsibilities are. The rest of the stuff is on their side. I do all the financials and anything pertaining to that. I see myself in a consulting format for other aspects. Our roles are pretty delineated. We each have our own silo, although we consult with one another.”

Paul acts as a consultant for tasks he has handed over. “I go out to the stores, make observations and send those back to Palmer,” he explains, noting that these aren’t always negative. He might say, “While in the store, I caught Gary doing a good job with notes.” Paul does the same with warehouse and operations, passing those observations along to Christina.

With these, Paul takes the attitude, “Here is my observation, you can summarily dismiss it or do something about it now or later.”

Full succession isn’t a fixed timeline: it may be five years or ten-whatever is needed. But sooner, rather than later, Paul would like to cut his 48 to 60 hour workweeks down to 30 and spend more time engaging in his favorite pastime-bicycling.

On the independent front, “We have two locally owned and operated retailers who are great competitors,” says Paul. “They are well run, well financed: Mill Creek Carpet & Tile and Grigsby’s Carpet, Tile and Hardwood. Both have nice facilities, do training and are excellent competitors.”

VALUES TO PASS ALONG
Twenty years ago, Paul developed a vision statement, which he continues to look to today: to be the store of choice for professionally installed flooring in all the communities they serve.

Succeeding in that venture enables the business to achieve the long-range goal he has set, which is “to continue to grow and offer opportunities for our people to advance and make an above average income while enjoying their life.”

Paul is strongly committed to employee education and reports that Johnson Floor & Home’s operational efficiencies have always been in the top 10% to 20% in the industry due to established policies and procedures and adherence to the company values: clean, neat and organized; continuous improvement; can-do attitude; integrity and honesty in all our dealings; adjust and overcome; common sense.

FINDING FOLKS
Johnson Floor & Home’s installation crew is composed primarily of subcontractors that work full-time for the business alone. It also has a few installers on staff.

Like so many operations right now, the company does struggle to find high-quality employees, noting that finding installation crew members is most challenging, followed by sales professionals. Office and warehouse workers are the most readily available in the Tulsa market. Indeed, staffing is the biggest challenge that the business faces, Paul says.