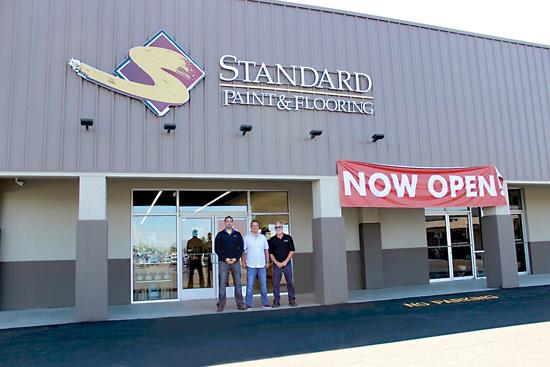 Generational businesses can be tricky things. Sometimes the younger generations swoop in with a fury, seeking to revolutionize what they see as an antiquated operation, occasionally tossing out the baby with the bathwater. Other times, they rest on their generational laurels, doing things as they’ve always been done, essentially functioning as operators rather than entrepreneurs. With their purchase of Standard Paint & Flooring, third-generation owners Regan and Craig Myers are working hard to strike the right balance: honoring what their father and grandfather built, while also moving the business into a diversified and sustainable future.

MOVING FORWARD, HONORING THE PAST
Purchasing a long-established business isn’t, by any means, a tidy task. Anytime a new owner takes possession of an operation, they are buying not only the brand equity, real estate and product offering but also the decisions, good and bad, the successes and the mistakes. In some ways, it’s much like adopting a rescue dog; a new start doesn’t reset the clock, it doesn’t erase a history, but if you’re willing to put in the hard work, that labor of love will yield satisfaction in the end.

For Regan and Craig, honing Standard Paint & Flooring into an operation that can not only weather the ups and downs of the contemporary retail flooring landscape but also thrive is a matter of improving on what’s already in place as well as growing into new segments where they see opportunity.

While the six showroom locations were established before Regan and Craig officially took over, the brothers have added the stucco, cabinet and concrete polishing divisions under their watch. In addition, they have worked hard to strengthen each of their branch locations, some of which were weaker than others. These actions have expanded the ranks of Standard Paint & Flooring significantly, from 35 employees in 2010 to just over 100 currently.

Today, the business is about one-third retail and two-thirds to-the-trade.

LINEAGE
With his career roots in the paint business, Richard Myers opened a Yakima, Washington-based Benjamin Moore dealership-with partners-in 1954. Twenty years later, he bought his partners out and expanded into a larger downtown facility.

Richard’s son, Dick, joined his father in the business in 1980. Around that time, a local floorcovering store shut its doors, and, seeing an opportunity, Dick recruited one of its top designers and launched a floorcovering division. It was also in the early ‘80s that the company incorporated window coverings into its offerings. In 1986, Dick officially took the reins as Richard retired, and the company added two additional locations-in Richland, Washington and Bend, Oregon. Over the course of the next two decades, locations were also added in Ellensberg and Sunnyside.

Dick’s sons, Regan and Craig, joined the business in 2006, and in 2012, the family opened its sixth store, in Wenatchee. After testing the waters for a few years, Regan and Craig bought majority ownership of Standard from their father in 2013. Dick still comes in two mornings each week to order paint.


Choosing what areas to expand into is a combination of both methodical analysis and opportunity. For instance, Standard expanded into stucco in 2009-a natural progression from paint sales-and soon after, a cabinet salesperson called on the company and suggested that it was poised to do well in cabinet sales. Regan had too much on his plate to pursue the venture, but Craig took hold of the idea, launching a cabinet division in 2011. Today, the cabinet division accounts for about 10% of Standard’s total business and remains Craig’s focus.

Standard’s launch of its concrete polishing division, on the other hand, grew out of Regan’s observations about market trends. “I noticed that more and more locations were choosing concrete over actual floorcovering, so I thought it was a good way to make sure that we sold as much of the floor as possible.” To launch the operation, Standard hired a crew-separate from its flooring installer pool-and bought equipment, both of which are costly endeavors, but Craig believes the relatively new venture, which officially started in 2017, will ultimately be a profitable one for Standard. “It feels like it’s paying off,” says Craig. “We’ve had our fair share of learning experiences, but we have a good crew, and we have the system down now.”

On the retail side of the business, it is interesting to note that Standard has division specialists on the showroom floor as well. Its staff designers, for example, handle floorcovering and paint but rarely cabinets. Cabinets are sold via the company’s cabinet specialists, which are staffed at most locations.

THE FLOORING DIVISION
By square footage, floorcovering accounts for about 80% of Standard’s showroom space. The company sells all the flooring categories, with carpet and resilient being the largest. Standard also offers area rugs. Most of these are serged and bound, but in a couple of stores, the company has area rug displays as well. With Yakima being located on the desert side of Washington state, Standard has a significant ceramic tile offering and growing that offerings has been a focus for Regan and Craig.

As for so many across the country, the installation side of the business is an ongoing challenge. Says Regan, “Installation is a day to day struggle. And the struggle is different at each location. One might struggle with having enough carpet installers, another a shortage of ceramic installers. We’re trying to develop an installation training program on our own, and it is hard work for sure.” Regan is modeling the program after one that a friend in the business operates. Essentially, Standard paid the wages of a man while he apprenticed with a seasoned installer for six months. The experienced installer got a free set of hands for teaching the apprentice the trade. Standard then sent the apprentice to a six-week-long Certified Floorcovering Installers course. For all that, the installer has committed to training two additional installers in the trade, then Regan hopes those two installers will each train two, and those four will train eight, and so on. But the entrepreneur also notes that, “We’ve spent a lot money on people who haven’t made it.”

THE STANDARD STANDARD
Managing growth is a significant part of Regan’s job. The company is currently honing its core values and purpose and vision statements to both make sure they align with the current business and to root that culture more firmly in the many new hires. “While our core employees have stuck with us through our growth, we are so diluted from that core that we have to refocus our identity so that everyone understands it,” says Regan. “We never thought we’d be where we are this soon.”

Standard hired a staff digital manager just this January, who has both launched a new website and social media campaigns. Hiring a staff employee for this work-rather than farming it out to a firm-was an act in service of the brand. “We figured that to get the brand and identity perfect on our new site, we needed to have someone who knew us and our brand well.” The new site includes active e-commerce; customers can currently buy paint on the site. Whether flooring will be sold via e-commerce is still a matter of debate. “We are working out the kinks with paint, and we plan on researching sales of flooring online,” says Regan.

ROLLING WITH THE PUNCHES
Standard Paint & Flooring has had several product partner shake-ups through the years but has responded with the sort of elasticity needed to succeed in such a rapidly changing business environment.

As for its stucco, “we started out with STO, took a couple years to understand the business, and then invested in talented people, a new facility and two truckloads of inventory, and then STO decided they would be better off with the other distributor in town,” says Regan. “It’s so interesting because it was a situation that at first I thought was a catastrophic blow, but we got together with Parex, who was the product line the other distributor was selling in town, and it was one of the best things that happened to us because that product line already had a built up customer base, and the funny thing is the other distributor in town has already dropped STO.”

Standard is a Shaw aligned retailer, so that is by far its largest flooring vendor. It also works with regional distributors like T&A, Cronin, Surface Art and United Tile.

In paint, Standard sells Benjamin Moore and PPG, and both of those have been long-term partners.

Says Regan, “I think it’s kind of cool that our two largest vendors, Benjamin Moore and Shaw, are both owned by Berkshire Hathaway. At the last Shaw Flooring Network convention, Warren Buffet was interviewed by three dealers on the dealer council, and I sat in the front row with my team. That was a great experience.”