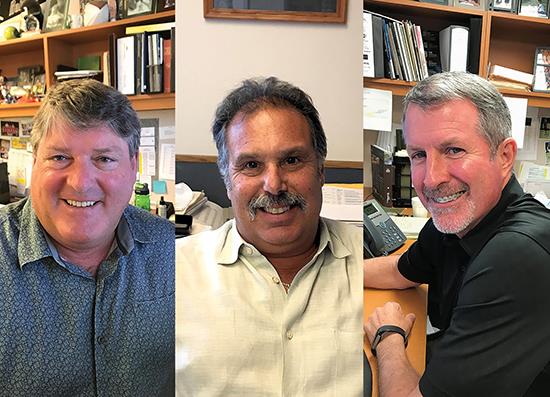 Hoem & Associates is a major San Francisco-based commercial contracting firm that stakes its reputation not on low cost but high quality, a standard it achieves in part by making all 100 of its union installers employees. The philosophy behind that strategy is simple: freeing installers from the confines of contract work gives them the opportunity to slow down and do things right, rather than scurrying from one job to another in a mad dash to achieve a livable income. What’s more, it gives them a stake in the success of the job, and that makes for a big-picture-focused and solutions-oriented team.

BUSINESS ROOTS
Hoem & Associates-owned and run by Sean Hogan, CEO; Russ Hoem, CFO; and Mike Valerio, principal-was founded in 1940 as Peterson/Cobbie. In 1978, Bill Hoem and Don Schurba purchased the operation, changed the name to Hoem-Schurba & Associates and transformed the business from an install-only firm to a full-service commercial contracting business.

Hogan was a Milliken rep for the Bay Area in the late 1980s when, coming back from a mill tour, he ran into acquaintances Bill and Don on a plane. The trio started talking, and Bill and Don asked Hogan whether he’d be interested in moving from the manufacturer side of the business to the contractor side. Knowing that the next promotion at Milliken would move him from his beloved California to Georgia, Hogan considered the offer, and ultimately told Bill and Don that he would make the move if he could bring childhood friend Mike Valerio in to work with him.

So, in 1990, Hogan and Valerio got together a group that included Bill’s son Russ and Don’s son (now gone from the business) and began running the operation. In 1992, the foursome formed a ten-year plan to buy the firm, which was at that time a $5 million business, and in 2006, they changed the name to Hoem & Associates. In the years between 1990 and 2020, the business has grown from 15 employees to 130 and into one of the top ten largest commercial contracting firms in the U.S.

Says Hogan of the decision to join Hoem & Associates, “It is the best thing I ever could have done. We’ve had a heck of a lot more ups than downs.”

TEAM FOCUS
Like so many other leaders, Hogan credits his team with the successful growth of the business. The union firm employs every one of its installers. Notes Hogan, “We don’t sub anything.”

The CEO is especially proud of the opportunities the business has afforded those working in it. “We had an operations manager who retired recently after 34 years with the business. He started as a truck driver, then a delivery driver, then an apprentice, a journeyman, and ten years ago, he became the operations manager. Our average tenure for installers is between 15 and 18 years. And what’s great is that our installers have brought in their kids, their relatives. We have apprentices from installer families, and they bring the same work ethic. I have had guys come to me with pictures of a new house, the first anyone in their family has ever bought; guys telling me, ‘My son is the first in our family to ever go to college.’ It brings tears to my eyes.”

Employing 100 union installers rather than using subs doesn’t come cheap, of course, but that’s okay with Hoem & Associates-and its clients. “The people make the company,” says Hogan. “Even our installers carry business cards, and clients will often request them by name. We aren’t the low-cost provider in the market. We are known as literally the most expensive, but we do quality work.”

In fact, Hogan proudly reports that Hoem & Associates has virtually no product manufacturer claims because his installers take their time to work out idiosyncrasies of products and do things right rather than rushing through to the next job. “When there are big product issues, we come together with the manufacturer and solve them up front,” the leader notes. “We keep the client out of it. We make things work.”

In addition, being part of the union insulates Hoem & Associates from the installer shortage to a degree. “The union gets a fair amount of people who apply to be apprentices,” reports Hogan. “The wage scale is livable in the Bay Area, so people want to do it. It isn’t a piecemeal career this way.” San Francisco is largely a union town. According to Hogan, 80% of class A office jobs require union labor. “The tallest building in San Francisco, Salesforce Tower, was 100% union labor, and we did 95% of it,” Hogan says. “There are a lot of guys who do subcontract union installers, but we tried it, and the customer satisfaction isn’t as high. Subcontractors necessarily want to get done faster so that they can move on to the next job.”

On the staff side, Hoem & Associates takes a team approach to hiring and has had similar good fortune. “If we see someone who we think will fit in with our culture, we have everyone interview them,” he says. “A new hire has to fit in with everyone here. No one is a lone gun. Collaboration is key. If a sales team member needs help, I or another of the owners will drop off samples for them. There are no egos here. This business runs as if a family owns it.” In the pandemic, Hoem & Associates did not furlough or layoff a single staff member.

Hogan reports that in spite of the fact that San Francisco is a large city, it often feels like a small town, and Hoem & Associates urges its team members to treat associates like friends. “We encourage our sales reps to take their flooring reps and customers out to do fun things, to get to know them and what projects they are working on. We work hard, and we play hard,” notes Hogan.

OTHER VENTURES
Hoem & Associates works with all the traditional floorcoverings used in the commercial market. On the soft surface side, the use of broadloom is very low; about 98% of soft surface projects are carpet tile. And, of course, the company has seen the use of LVT rise dramatically.

Due to the increase in the use of polished concrete, Hogan, Hoem and Valerio formed a second company to complete that work, C3 Surface. Opened five years ago, C3 Surface has been very successful. “The concrete finishing business has a high barrier to entry,” explains Hogan. “However, it has turned out to be a really good joint process where clients can rely on us both. And, if we have two separate bids going out on a project [one for floorcovering and the other for concrete], if we don’t get one, we might still get the other.” The company has different leadership teams, but they meet weekly to plan. In addition, the group has 50% ownership of Corporate Care, a maintenance firm out of Houston, Texas.

COVID-19 RESPONSE PLAN
Safety and preparedness are key components of success for Hoem & Associates. In 1997, the group established a formal safety program, and the organization begins every meeting and event with a discussion of safety protocol. Hogan reports that putting safety first “breeds quality. Our injury rate is through the floor, the lowest you can have.”

This safety-first focus means that Hoem & Associates was well positioned to deal with the COVID-19 crisis. In mid-March, six counties in the San Francisco Bay Area were the first in the country to issue shelter-in-place orders. And the Hoem team set to work creating a comprehensive COVID-19 program. This includes a thorough exposure prevention, preparedness and response plan as well as COVID kits containing masks, gloves, bleach spray, bleach wipes, sanitizer, paper towels and anti-fog eye protection.

With its plan of action in place early, Hoem & Associates shared the document with Starnet and has allowed its clients to use it as a template to form their own plans.

Now that construction is back up and running in San Francisco, a formal plan becomes even more crucial. During the quarantine, the organization had only five of its 100 in-house installers in the field. At this point, all 100 are back to work, and that means risks are higher and more coordination is required. For example, entry to job sites now operates on a strict timeline, with what Hogan calls a “tee time” for each specialty: electricians at 6 a.m., plumbers at 6:15, flooring installers at 6:30, and so on. In addition, the teams have to pay careful attention to square footage to maintain appropriate social distancing requirements and make sure that they never have too many people on a floor at one time.

Of course, Hoem & Associates, like so many others, is considering the long-term ramifications of the pandemic. Says Hogan, “We were at such a growth rate in northern California [before the pandemic]. My big concern is if companies decide that they don’t need the real estate that they thought and use more work-from-home labor. If that occurs, it will reduce the real estate requirements, which will reduce the need for flooring. However, lots of commercial real estate brokers I’ve spoken with are having to expand space currently due to social distancing.”