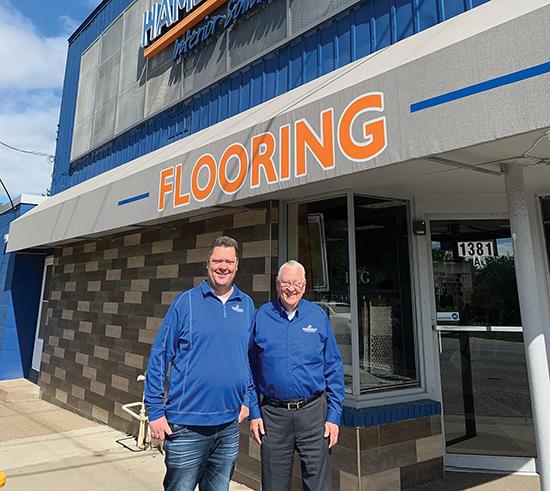 In the late 1960s, Ted Natus’ car broke down in St. Paul, Minnesota and he decided to stay. With some experience in the paint business, in 1970, he introduced himself to Ed Hamernick, owner of a one-room paint store called Hamernick’s Paint Co. The business was, at the time, run by a manager and failing, and Hamernick’s accountant had advised him to shutter it. Natus asked Hamernick to keep the doors open for a year and give him a chance to turn the operation around. Hamernick was intrigued and asked Natus what he would need to be paid; Natus, single at the time, said he’d do the job for $1.50/hour. The first year under Natus’ management, the store made $3,800, and by the third, revenues were $25,000. Hamernick was thrilled.

PUTTING DOWN ROOTS
All the while, Ted, who was only schooled formally through eighth grade, was educating himself, “I’d read paint retailer and trade magazines. They were my Bible. I studied them. They were talking about paint stores adding flooring. There were eight to ten stores in the city that put in a rack of carpet and thought they were in carpet business, but I knew that wasn’t enough. I talked Ed into building an addition and hired a designer.” In 1980, the new-and-improved Hamernick’s launched as a paint, wallcovering and floorcovering store, the flooring portion of which was mostly carpet at the time.

In the year 2000, more than 30 years after his car stranded him in St. Paul, Natus purchased the business he had built, a business which bore little resemblance to what it was when he started. Now out of the paint and wallcovering businesses, the floorcovering store was by many counts a success, yet still not turning a profit.

Natus paid a hefty sum for Hamernick’s, which left him with steep monthly payments on a then-unprofitable venture, a fact that was known to the Hamernick’s team, a group of individuals Ted and his wife, Lynn, now consider family. “My employees have made this business succeed. They killed themselves to help me. I owe them everything,” Ted says.

ADVERTISING
Regarding Hamernick’s’ current advertising strategy, Ted says, “We are on a talk radio station, which has paid off well for us. We do some TV. We do very limited newspaper, although the few ads we do still really draw. With the new store, we will do quite a bit of TV. And we will extend our advertising to Minneapolis.” The company is also active on social media and has a modern, informational website.

Ted always wanted to have an animal in his advertising and some years ago came up with the idea of Gilbert the Goat. Gilbert, played by a real goat, is a local favorite, and Ted reports that when he’s out and about in St. Paul, locals often mention Gilbert. “He is a star,” says Ted.

TED'S TEAM
Once Ted and his team had control of all aspects of the business, the real growth began. Over the course of the next 21 years, Hamernick’s added commercial, multifamily and single-family builder flooring divisions as well as a decorating division (countertops and window treatments) in addition to launching its Flooring Superstore, and last year, revenue for the business reached $43 million. Commercial flooring is the largest division for the company at $15 million, followed, respectively, by multifamily ($12 million), single-family builder ($6 million), decorating, retail flooring and commercial design center, all of which are around $4 million. Ted emphasizes that his team doesn’t just do many things but does them well.

Ted’s affection for his employees is overflowing, and he believes strongly that the love he and Lynn have for their team trickles down to customers and that, in effect, is what has made the business a success. “I look at the employees as my children, and they look at me like a father figure,” he explains. “Lynn and I care a lot about them and expect them to treat customers the same way. If we love and care about customers, we will be okay. Without them, we have nothing.” Hamernick’s offers its salaried employees health insurance and benefits and donates $0.50 for each dollar they invest in their 401(k)s. Upon his retirement, Ted hopes to offer key employees the opportunity to buy into the business for partial ownership.

In St. Paul, all of the Hamernick’s’ operations run out of two buildings across Rice Street from each other. The Flooring Superstore showroom is around 16,000 square feet and sells all the traditional flooring categories, with LVT and carpet accounting for the most sales. Hamernick’s Interior Solutions has four designers on staff in the Flooring Superstore and two more in its commercial design center.

The new location in New Hope will carry a large, in-stock selection of vinyl plank, carpet, laminate and some hardwood. “Looking at the new store, we will probably have 2,000 pallets on the floor in stock,” explains Ted.

Asked “Why now?” to his first “expansion out of St. Paul, the entrepreneur responds, “I don’t know if it’s the right time, but we just keep growing. The demand is there. People from Minneapolis just don’t like to come across the river [to St. Paul], so, we’re finally opening a store there, and I’d be surprised if we don’t open one or two more in the next six months.”.

BOOTSTRAPS
Ted has seen more than his share of struggles. At age 14, after his mother’s untimely death, Ted overheard talk of sending him to an orphanage, so he jumped a train and went south to pick cotton. He later moved to Butte, Montana to work in the copper mines. It was in Butte that he got the opportunity to work in his first paint store.

Ted has a natural mind for math. “I’m a numbers man,” he explains. “It’s something I inherited. And over the years, I advanced myself as much as I could.”

Today, Ted continues to do business the traditional way. He doesn’t have a computer in his office and owns no cellphone. He works every day.

When asked about his greatest challenges in business, he replies, “My age. I have to face the fact that I’m getting older and won’t be able to work seven days a week forever.” In spite of that, within the next year, Ted hopes to launch one or two more Hamernick’s Flooring Superstores in addition to the one that he is currently opening in New Hope.

For many years, Ted’s wife, Lynn, worked in the business beside him, overseeing claims. Today, she has cut back to one day a week and handed off her assigned responsibilities to others. Regarding her role today, Ted says, “She is a mom figure. Employees go to her with their issues. There are some things you won’t say to dad that you will say to mom.”

In addition, Ted and Lynn’s son, Troy, runs the Hamernick’s Flooring Superstores and serves as spokesman in the company’s commercials, alongside Gilbert.