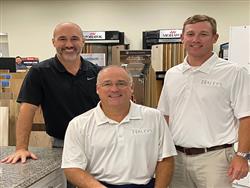 Haley’s Flooring is a Huntsville, Alabama-based, second-generation floorcovering business that has stretched its wings to tender a broad range of non-flooring products, pairing this diversity of offering with its long-established service focus to streamline the renovation and building processes for its retail and builder customers.

Haley’s operates from a ten-acre campus in a retail area, flanked by a retail lighting business, an appliance retailer and the local homebuilder’s association. The company’s business breakdown is 65% builder, 35% retail and 10% commercial.

LOOKING BACK
Carter Haley was an Evans & Black rep before leaving the manufacturing side of the business in 1975 to partner with two associates in creating a Huntsville-based floorcovering business serving retail and commercial customers. Carter focused on commercial work.

Carter split from the pair in 1988 to step out on his own, launching Carpet Systems, a commercial operation that transitioned into retail and builder work. With the business’ altered focus, Carter and his wife, Nancy, who ran the interiors side of the operation, changed the name to Haley’s Flooring around 2000. Over the years, the pair’s sons, Chris and Michael-who had worked in the business since their preteens-joined the family endeavor full time, as did family friend Adam Rogers.

In January 2020, Carter and Nancy stepped away from Haley’s, and today, Chris focuses on relationship-building and sales, while Michael concentrates on the behind-the-scenes operations, including finances and purchasing. Rogers, who has partial ownership, runs the builder program.

Says Michael of his parents’ departure, “My parents retired three years ago, but it took two and a half years to get them out of the office. They birthed this business, and to walk away was rough. They wanted to do it, but Chris and I gave them a little push. You get to a certain point where you need to step back and reap the rewards. They saw that the business was doing well and released it.” He adds that they still come in daily to “check email or make a Costco run” for the business.

In addition to Michael and Chris, two additional Haleys have joined the business; Chris’ wife, Kristi, is the marketing director, and his daughter Abby runs the interiors business.

HARDWOOD STRONG
Haley’s sells all flooring categories, with hardwood being its largest category from both a volume and dollar perspective. This is, of course, unique today, as LVT sales have generally exceeded hardwood in most markets. LVT is Haley’s second-largest category, followed by ceramic and carpet. Michael explains how Huntsville’s unique dynamics play a role in hardwood’s dominance, “Huntsville customers are traditional, and local real estate agents are too, so LVT is taking hold but more slowly than in most markets.”

However, hardwood’s strength at Haley’s is largely due to the fact that the company is intentional in its promotion of the category “The way we train our sales staff is to show the hardwood first,” explains Michael. In addition, the showroom is assembled in such a way as to promote the category, with hardwood at the front of the store, meaning that customers have to walk through the real thing to get to the lookalike.

The store recently added Bruce’s Barnwood Living by Mark Bowe and has already sold a job utilizing the solid hardwood line, which features a weathered look with timeworn character, inspired by woods found in historic properties. Bowe is star of the DIY Network’s Barnwood Builders. “Huntsville is a slab market,” explains Michael, “so we don’t sell a lot of solid, but when we do, it is upper-end, high-value product, which Barnwood Living is. If people are going for solid, they want character.”

Michael reports that hardwood or hard surface are “pretty much used in all living areas, and we are now seeing it go into master bedrooms and closets. Carpet is strictly used in guest and playrooms, while tile is confined to bathrooms and wet areas.”

THE CHALLENGE OF GROWTH
Haley’s has its sights set on growth. Says Michael, “Our greatest challenge is to continue to grow and find areas of growth without sacrificing the service and professionalism that we have now. Excellence is our foundation. If we lose that, we will lose our identity and our business.” The company is open to entering new niches in its pursuit of acting as a consolidated source for its retail and builder customers.

RETAIL OFFERINGS
In 1992, Carter and Nancy built the facility that houses Haley’s today, and over time, the company has purchased surrounding parcels and expanded its footprint. Haley’s currently has five buildings on its ten-acre campus (with four acres yet undeveloped): the retail showroom and the interiors showroom, which are connected; the builder/commercial division with warehousing; the cabinet showroom/facility; and the granite fabrication facility.

This wide variety is key to Haley’s differentiation in the local retail market. “The customer can come in, design the house and also furnish the house,” explains Michael. “We are trying to get as close to being a one-stop-shop as possible, outside of lighting and plumbing. We have developed a model that is service driven. Price is important, but we want customers to be happy with the price and the product and bring their family in to show the project off.”

Of retail activity amid the pandemic, Michael reports, “The retail business is up because a lot of people are at home, life has slowed, and they are looking at their homes thinking about what they need to fix and update. The interiors side of the business has increased with furniture and rugs, and the flooring side has as well. All in all, it has not been bad.

THE BUILDER BUSINESS
Huntsville is growing at a rapid rate with the FBI, Toyota/Mazda and U.S. Army Space and Missile Defense Command adding jobs that contribute to population expansion. In fact, the city is projected to become the largest in Alabama within three years, and all those new inhabitants need homes.

“We are having a good year,” reports Michael of Haley’s’ builder side. “We are doing very well with builders. There is low inventory out there, and the presell market is about as good as I’ve ever seen it. In addition, the multifamily market is at about 98% occupancy, which forces builders to build.”

As on the retail side, Haley’s offers a one-stop-shop capability to builder clients. “This helps speed up the construction of a house and creates better flow in the process,” says Michael.

PANDEMIC PIVOT
With the onset of the pandemic, Haley’s was deemed essential due to its builder work. The interiors business was shut down for three weeks, while the flooring side remained open. The company used the initial lull to shift gears to social media advertising and online sales as well as to update showroom floors and displays. While walk-in business was “very minimal,” the curbside pickup program that the company rolled out did very well.

Advertising-wise, the company invested more time into Facebook, Instagram and Houzz during the quarantine. Haley’s also has a blog. “We are not going to pull away from traditional forms of advertising, such as radio and TV, but we are dedicating more funds towards digital marketing now,” Michael reports.

The company had five positive COVID cases among employees, all of which were in the same building, and instituted strict policies for cleaning and mask wearing for employees, customers and installers.

GETTING TO KNOW BOWE
Michael and his wife were featured on seasons seven and ten of “Barnwood Builders,” wherein host Mark Bowe disassembled a cabin in West Virginia and reassembled it in Alabama to serve as the family’s lake house.

In addition, in 2018, Haley’s teamed up with Bowe to build a 1,000-square-foot cabin in the Huntsville Civic Center during the Huntsville Madison County Builders Association from which Bowe hosted meet-and-greets and seminars.