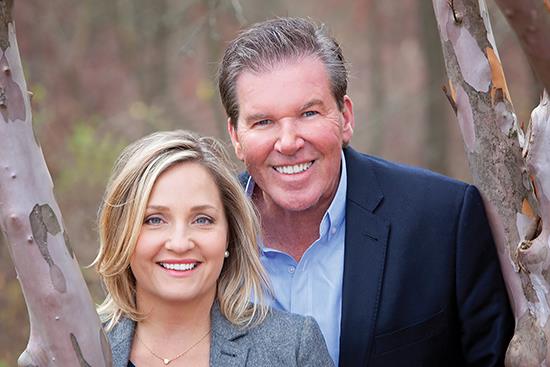 Through high school and college at Bloomsburg University, Tom Garvey worked for a floorcovering store as an installer and became an Armstrong-certified mechanic. After graduating with a liberal arts degree, he took a job in middle management in the automotive division of TRW, but his heart wasn’t in it. So Tom quit his steady job and opened a floorcovering retail store. Needless to say, his parents were concerned by the decision, but Tom was willing to work hard for its success. “When I started the company, I would install during the day, open the doors from 3:00 p.m. until 8:00 p.m., then go out and measure after the store was closed,” he recalls. “It is my passion.”

GROWING A QUALITY INSTALLER TEAM
Having started as a certified installer, Tom was committed from day one to offering excellence in installation, so he incorporated an installation educational program into his business. All potential installers start with Garvey’s as hourly employees with benefits and 401Ks. For the first one to two years, they are paired with a senior mechanic as an apprentice, and Garvey’s also conducts classes on topics that may require extra instruction-pattern matching and seaming, for example.

In addition to in-house and jobsite education, Garvey’s makes use of the education that manufacturers offer, so newer installers are receiving constant product training and “the older ones learn new tricks,” says Tom.

Once the apprentices become independent mechanics, they can choose how they want to work-as independent contractors or Garvey’s hourly employees. Using this system, Tom has been able to maintain a steady pool of installers doing work that meets his standards.

To find good candidates for this installation program, Tom partners with a local vocational school, whose principal recommends students he believes are good candidates for a career in flooring installation. Because high schoolers often interview poorly, Tom’s general practice is to bring any recommended students on board and start them in an apprenticeship. In all but one instance, the students have stuck with the program and gone on to a career in flooring installation.

In addition, Tom frequently offers incentives for those employees that recommend friends or family to his installation program and has found good candidates this way as well. Key to this, Tom notes, is “making Garvey’s a good place to work,” so that employees feel comfortable recommending others to the job.

Rooting all of this is the deference Tom has for installers and the trade. “My installation team has always excelled. I know how hard they work. I make sure they have the tools and education they need and give them my respect,” he reports. In addition to his four in-house installers, Garvey’s has 15 to 20 subcontractor installers that he contracts work to regularly.

A PICTURE OF GARVEY’S
At one time, Garvey’s had two additional locations, but, around a decade ago, Tom decided to close two of his four stores because he believed them to be overlapping in territory. Tom reports that his theory was proven correct when he saw no decrease in volume going from four stores to two.

Retail makes up around 50% of Garvey’s business, with commercial and builder business accounting for the other half, and Tom notes that he has been working with the same builder clients for 20 years.

Garvey’s sells a full range of floorcovering products, as well as bound area rugs. And last month it added drapery to its retail offerings. While Garvey’s reports the same trends as other retailers with regard to the rise of hard surface and the popularity of LVT, he also notes that his operation has been selling, “lots of laminate, which is a better-quality product than SPC.” Tom reports that Mannington is a strong partner in its laminate business.

Tom is “a big believer in advertising,” using a range of methods that include traditional (newspaper inserts, TV and radio) and social (Facebook), but he notes that, because central Pennsylvania is very rural, word of mouth still counts for a lot, and repeat customers account for 95% of Garvey’s business.

Tom’s wife, Christy, who has a business degree from Bucknell University, oversees the accounting department at Garvey’s.

A STEADY STAFF
Another strength that Garvey’s leans into is its operating systems.

The company has a strong partnership with RFMS, which visits the operation about twice annually to refresh Garvey’s system, implement new programs and make sure the business is using the platform “to the max,” says Tom.

In addition, Garvey’s has been a Flooring America member for around a decade and Tom speaks highly of the organization’s “top-notch” university program.

Garvey’s also brings in trainers for his sales team a few times a year.

“The biggest strength I have is really good employees, who have been with me 20 years on average,” he says. Those long-term employees are steeped in not only Garvey’s method but also its mentality. “We are focused on customer service, from ordering to sales to the warehouse. Every employee is focused on that. Our customers could buy anywhere. We have to give them a reason to buy from us.”

All that said, Tom’s biggest challenge moving ahead is the age of his staff, many of whom are nearing retirement. “The job market is hard right now, and I can see that my replacing seasoned employees is going to be my biggest challenge in the next three to five years.”

Tom says that he can generally tell within an interview whether a potential employee will fit into Garvey’s culture of customer service or not.

THE NEXT GEN
Tom’s 22-year-old niece-currently in college at Susquehanna University-and two teenaged sons (ages 16 and 18) have all expressed an interest in joining the business. All three regularly work at Garvey’s, during summer break and even on holidays and weekends.

Tom is insistent that the trio join the business only if it is their passion. “I tell them, ‘If you won’t wake up in the morning and love it, don’t do it.’”

Until then, Tom is happy to captain the ship, adding, “I still love what I do. I still have that fire in the belly; that’s what makes me proactive. I have great employees running the operation; my job is to keep Garvey’s in place for the next generation coming in.”