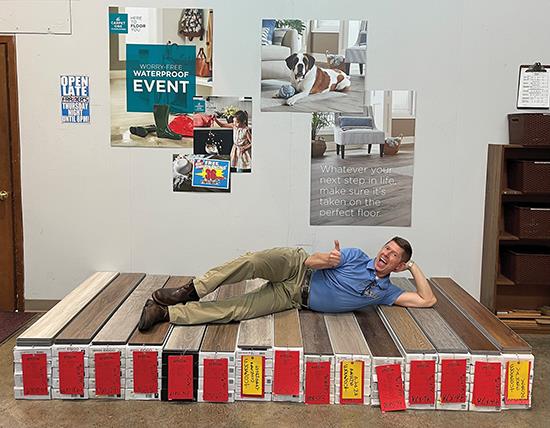 While running a successful business requires a big-picture perspective, Kevin Frazier, president of Frazier’s Carpet One, never forgets that the big picture is made up of the small details.

Consider his approach to invoicing: every single invoice is double-checked, and, in fact, at this year’s Carpet One convention, he will speak on his process, which saves his business almost $200,000 annually in mistakes or oversights. While it may seem boring or tedious to many, this one small practice, integrated into daily procedures, can set the business on the course for greater success-affording salaries for additional associates, for instance, or helping to fund a showroom renovation.

“My mom said early on, and it’s now a Kevin-ism, ‘The money is where the money is. Not in floorcovering,’” Kevin notes. “We pay attention to things that other retailers think of as too minute.”

Similarly, rather than scrambling every time it has a job opening, Frazier’s continuously hires retail sales associates (RSAs) and installers. On the RSA side, Frazier’s has an on-going policy of offering a $1,000 finder’s fee to any associate who recruits a new individual that achieves a tenure of six months. This may be an associate’s friend or relative or simply someone serving them in a restaurant, who they believe might be a good fit for the organization. In addition, the company has an ongoing posting on Indeed, which doesn’t produce many good candidates but does keep the search active. “Activity creates activity,” says Kevin. “Sometimes you don’t know what exactly you need to do, so you just start swinging.” The catchphrase of the company’s hiring philosophy is “Recruit. Train. Deploy.”

On the installer side, Frazier’s runs a recruitment ad on the local classic rock station-an idea Kevin borrowed from a Carpet One member in Ohio. In addition, Kevin notes that his team is always keeping an eye on the journeymen hired by cash-and-carry customers to install their flooring. Ones that stand out as skilled, competent and professional are “getting a call,” says Kevin.

Since the 1970s, Frazier’s has been running an installer apprentice program to grow its own installation force, an initiative started by Kevin’s dad, Ken. “While we have tooled it up more over last decade, that’s a part of us understanding from our past experience that we might run out of installers sometime in the future,” says Kevin.

In this way, Frazier’s is constantly preparing for needs to come. “We are well organized and understand why we do everything we do,” says Kevin. “We have command of our vison and execution of our business model. In the same vein, some of the lingo that we use is with ‘One eye on our heritage and one eye on the horizon.’ It’s about experience and vision-playing to both how long we have been doing this and always looking to improve. And from a floorcovering standpoint, we stock big and manage that well.”

FROM THE GROUND UP
In 1945, C.M. Frazier and his son Charlie returned from World War II, resettling in their hometown of Knoxville, Tennessee. Charlie struggled to find work and, out of desperation, borrowed $800 from a loan shark to purchase hardwood floor sanding equipment and went to work.

Charlie paid off his loan, and, shortly thereafter, C.M. left his mill job to join his son. Soon, the pair was managing a small fleet of sanding crews. In 1956, at the age of nine, Charlie’s son Ken joined his father and grandfather in the business, working after school, on weekends and during summer breaks.

C.M. passed away in 1960, and, six years later, Ken dropped out of the University of Tennessee, at his father’s encouragement, to travel to St. Louis to learn the process for pouring Sand Cora decorative industrial flooring. However, before the father and son could diversify their offering using the methods Ken had learned, Ken was drafted into the Army to serve a tour of duty in Vietnam. In 1967, while Ken was still in Vietnam, his wife gave birth to Kevin.

When Ken returned home, his father was eager to expand the family business. In 1966, the Federal Housing Authority approved carpet for use in new homes, and, a year later, Charlie and Ken made the decision, encouraged by a builder they worked with, to expand into the carpet business.

In 1968, Frazier’s opened its first retail store. Twice a week, Ken would make early-morning carpet runs to Dalton with Kevin curled up beside in on the front seat of the truck, and in 1971, Frazier’s broke ground on the building that it still inhabits today. A few years later, Charlie and Ken decided to position the business as an “everything for the floor” store with a full offering of products.

The decision to build Frazier’s where they did was fortuitous. “It’s really close to an interstate exit, which wasn’t even there at the time, and we are dead center in the middle of the metro area,” says Kevin, “so we’re easy to access from all four corners of the city.” The company continues to stock a full range of flooring products, including both stocked and bound-to-order area rugs.

In addition, its offering extends beyond retail. “We are a four-legged stool,” says Kevin, “though one leg is distinctly bigger than the others, and that is residential retail replacement. Our mainstreet commercial and new builder businesses are the next two. The final leg is the proprietary relationships we have with insurance companies. The insurance business developed under my leadership, but while the pipeline didn’t exist before, Dad saw it coming.”

Interestingly, Ken has long believed that the key to a successful succession involves one generation stepping fully out when the next generation steps in. “Dad had a great vision years ago that generations work best together if they work in a more linear fashion, like a relay team, not rugby team,” Kevin explains. “There were maybe eight years of overlap where my father and grandfather were both ‘Mr. Frazier.’ With my dad and I, it was six years, so there is not time for a lot of competing or jostling. You work together for a short time, so it heightens the appreciation. I intend to do it the same way.” Ken fully retired in 2009 and comes in only a few times a year now.

HERITAGE
While C.M. and Charlie worked hard to build Frazier’s, they weren’t around to see their business achieve the level of greatness that it has today. C.M. was never able to “move out of the poor part of town,” as Kevin puts it. “He died at the age of 51 and had a hard life.” Charlie lived in poverty until his children were adults, when he was able to move to a more middle-class neighborhood. “They didn’t have the luxury of asking, ‘What do I want to do with my life?’” says Kevin. “But I was given that luxury.” Kevin, an attorney by training, is always mindful that the sacrifices his forebears made have afforded him the quality of life he has today.

In the late 1990s, Ken asked Kevin to take over the business, which, like his father, he grew up in and knew well. Ken always prioritized being an entrepreneur over a businessman. “My dad did a great job of morphing into an entrepreneur, and he encouraged me to go to law school for that reason-to make me a better entrepreneur.” Kevin’s focus in his law practice was tax and contracts law.

Ultimately, Kevin was persuaded to leave law for multiple reasons. “The financial aspects played into it substantially but what pushed me over the edge was that this business has afforded more than 1,000 teammates a decent living over 70 years-and from 1974 on, a good living,” explains Kevin. “The national competitors around us pay blue-collar wages. My dad was thinking about shutting the business down, and I felt it was important for us to continue to give back to our community in a larger fashion through affording people white-collar livings for things that the national competitors don’t. This business is helping other people send their kids to college and grad school. That’s the difference.”

THE DEVIL IS IN THE DETAILS
Kevin’s mom wasn’t always active in the business, but she had an exceptional mind for numbers, and she passed her insights along to her son. “The most boring aspect of what we do is probably most important,” says Kevin. “We really focus on our financials-everything from zealous inventory and cost-control to how we handle ownership of our real estate; it is the bedrock of keeping a command of our business.”

Along with that, the company is highly focused on being able to prepare its hires for success through its “Recruit. Train. Deploy.” strategy. “My strength is taking things that work well and breaking them down into easily communicable widgets so that different departments have well-written standard operating procedures that are easy to train new folks on. Paul Johnson [of Johnson Floor & Home Carpet One] taught me that, and one of the necessary components is that training must be easy and standardized with clear objectives written out well in bite-sized pieces,” says Kevin.

MANAGING GROWTH
Kevin is focused on maintaining the standards that prior generations have set even as the operation expands. “Our greatest challenge is to figure out how to grow without sacrificing quality,” he says. “That’s not altruistic; it’s a sanity statement. My dad’s vision was one massive building [not multiple locations]. Our building is now three times bigger than it was in 1971. How do you manage an empire without dropping things through the cracks?”

Ultimately, Kevin’s greatest desire for the business is that it still be going strong in 70 more years, in whatever form it takes, “The model we have in place is not a model for how to do well for the next ten years but to succeed across multiple generations. I have great enthusiasm for the fact that the Frazier family has empowered more families to experience the American dream in a robust and dynamic way.” The company has both a succession plan in place and a timeline for implementing it but isn’t yet ready to reveal the details.

BIG ON MARKETING
Kevin says, “We spend 4% of our gross on advertising. That is our goal, and we do it. Marketing is one of our top three secret sauces.” The business uses both traditional media and digital.

The traditional forms that it utilizes-radio, TV, outdoor and direct mail-are employed substantially and multiple times a year with radio and TV ads running continuously. Kevin voices all the radio spots as well as live remotes. For TV ads, Frazier’s has two spokeswomen who represent the businesses’ demographic. “We are serious about advertising and about having a consistent message with a high frequency,” the entrepreneur reports. “We do funny stuff too. Digital affords us the ability to put stuff together cheaply and use it in a timely manner”.

Kevin believes that its consistency in advertising helps it stand out from the competition, “We do a great job communicating our story and our quality to the community constantly with consistent messaging and high frequency. We have a jingle. It has been the same since I was in ninth grade. We re-record it from time to time, but it remains the same, and people know it.”