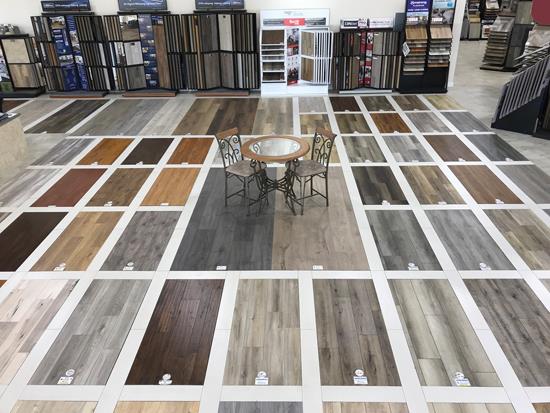 Any floorcovering retailer will tell you that the game is changing: the product mix has shifted dramatically; the consumer is more educated; the manufacturer pool has consolidated; big boxes have taken a bite; and installation has become a significant challenge, not to mention a barrier to sale in certain categories. Kent Copeland-owner of Floors Direct, which has locations in Melbourne, Stuart and Plantation, Florida-has implemented a number of unique strategies to navigate this evolving market, which, he believes, will be hard to survive for independent retailers who don’t proactively position against larger market dynamics.

SETTING COURSE
In 1995, Copeland-who had tenures at LD Brinkman, Mohawk and Shaw in his early career-opened a GCO Carpet Outlet in Tamarac, Florida. Soon after, he took over the New York Carpet World building in Melbourne, Florida as another GCO location and built a third in Stuart in 2003. Eventually, he left the GCO franchise but retained under his own brand, Floors Direct, some of the organization’s strategies, which he has used to establish his operation as an entity less reliant on the big mills than many independent retailers.

Copeland explains how his strategy materialized, “Florida went to hard surface quicker than everyone else, and it became harder to survive on carpet, so I started importing tile and stocking more hard surface. Today, I’m more of a hybrid dealer, carrying the major brands but also importing a lot to compete with Floor & Décor, Lumber Liquidators, Home Depot and Lowe’s that are chewing up the little guy.”

To that end, Copeland makes his margin on the buy and sell-with no hand in the installation pot. Currently, his margin on product is in the mid 40s, though it used to be closer to 50% in the carpet days. This approach is reminiscent of the GCO way, and, though Copeland knows that bringing in-house installation would offer a new channel for revenue growth, he doesn’t see this as within the wheelhouse of his strategy. He makes better margins than a traditional retailer on product and focuses on this effort.

That doesn’t mean, however, that he pays no mind to the products once they’ve left his warehouse. He works hard to develop relationships with a “better standard of installer” and notes that, “When you look at my reviews online, they’re more about the installers than anything else.” But Floors Direct does not, in any way, get involved in the installation process.

Secondly, Copeland invests heavily in importing ceramic and resilient products. The retailer notes that he keeps “a couple million” dollars’ worth of inventory on hand. He buys SPC, WPC and laminate from China and brings in ceramic from Ecuador, India, Spain and Italy. His imports of Chinese tile have died off.

Copeland reports that deciding what to stock can be a challenge, as his market is diverse, but also notes that customers want choices today, and he attempts to offer that variety. For instance, he stocks 50 SKUs of SPC. He also believes that seeing a product as it’s meant to be seen is important, and his showroom floors are a quilt of in-stock products.

THE MIX
Unsurprisingly in the Florida market, ceramic is Copeland’s largest category and, last year, accounted for more than $3 million in sales. LVT/WPC/SPC come in second at around $2.5 million. Wood, laminate and carpet each represent a million and change.

Copeland is a big supporter in the laminate category. “Laminate is far superior to the waterproof products on the market today,” the retailer says. “More durable. Harder to scratch and dent. And the waterproof isn’t really waterproof. Unless you’re going to let your pets pee all over the floor or not wipe up spills, laminate is all you need.”

He believes that while some mills’ actions have shown that they deprioritize the category, Mannington has put real effort in to keep the category alive.

FACING FACTS
Copeland reports that his greatest business challenge is winning against all the chain competition in his market, which includes the big boxes, Empire Today and, more recently, 50 Floor. “All these businesses are nibbling and taking marketshare,” he says. “The big manufacturers want to act like they care, but they really don’t. They don’t really watch MSRP.” To the manufacturers, he asks, “If some brick-and-mortar guy is showing your product, why wouldn’t you want to support them? You’re going to make more there. Do the big manufacturers really care about independent retailers? By their actions, it doesn’t seem like it.”

Interestingly, Copeland believes that the same chain retailers that pose a threat to independent retailers also pose a threat to the mills, “Shaw and Mohawk are getting their butts kicked by these ankle biters, and now they don’t dominate like they used to,” he says. “They are getting chewed up. Armstrong is struggling. What is Mannington going to do-go direct? I wish the manufacturers would wake up. Today, it’s all about the stockholders and dividends. We have lost the way it used to be.”

When a Floor & Décor opened just eight miles from Copeland’s Stuart location, the retailer reports that he had to get more competitive, and he did that through importing. “We won’t lose a sale for price, but I’m making margins,” he reports. “It’s a whole different game.”

In fact, Copeland studies what’s selling well in the big boxes and positions his stock to fall in that range. “When I try to sell at a higher price, it’s more of a struggle,” he notes.

Of course, for individual retailers, carving a path through imports poses its own set of risks. In preparation for the January tariffs out of China, Copeland ordered material in advance, and now he’s sitting on a lot of inventory.

The retailer estimates that he bought $3 million worth of inventory outside of the standard channels last year.

WINNING ON HIS OWN TERMS
Copeland is nothing if not a pragmatist, but don’t mistake that for immutability; he is focused on seeing the landscape for what it is and applying his strategy to that market.

“When I went to one of the big manufacturers’ meetings in Las Vegas, I said, ‘You’re putting the little guys out of business,’” Copeland recalls. “’They can’t stay afloat because they can’t compete.’ In little markets, where there isn’t a big box, independent retailers might be able to niche out a living, but in metro areas, you have to chase contract or builder work or diversify or focus on a niche to survive. A traditional flooring store is a hard road to hoe in metro markets.”

He continues, “Having a separate identity is how independent retailers will survive, being diverse enough that customers feel you are competitive when they walk in. It’s about color and style and then price today. The big guys are determining the price point. Whether they should be or not doesn’t matter. People in the business tell me ‘You are selling that too cheap.’ And I say, ‘Not if you go to the stores I’m competing against.’”

Copeland believes that many independent retailers simply don’t have clear eyes on who their competitors are and what impact they actually have on a market, “If a big box fills a huge store full of hard surface, that might pull $1 million to $2 million out of the local market in a month. And how much does the Internet take in that time?”

At 63, and with two children working in the business with him, Copeland hasn’t lost his desire to win. “I want to dominate the flooring biz, and I want do it the way I do it,” he says. So far, that approach seems to be working; last year, Floors Direct revenues were up 12% to 14%, and double digits are hard to argue in a retail market fraught with challenges.

GOING DIGITAL
Floors Direct recently dropped its long-standing advertising method, cable, in favor of online. “Cable advertising for three markets was very expensive, and when we dropped it, we saw no impact,” he reports. Copeland sought the services of Creating Your Space-utilizing geofencing, Google and social media-and reports that, while he was late to the game with online advertising, the strategy has been much more successful than TV in his markets.