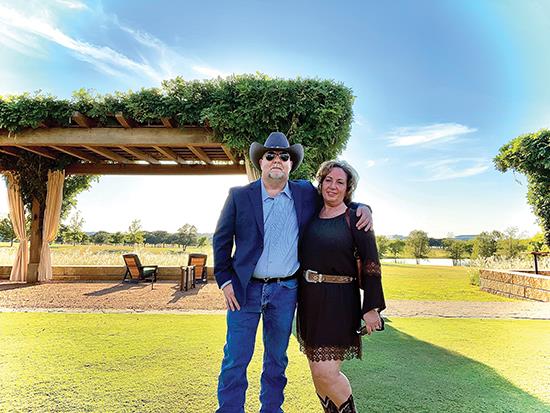 Richard Dobson is an installer at heart. His grandfather, Ernest Dobson, was a master tradesman. Flooring installation was the most challenging aspect of the work for Ernest, so he taught his four sons to install. All three of Richard’s uncles continued as installers through their retirement, and Richard worked alongside them from the age of 14. However, Richard’s father, Bobby W. Dobson, left installation to pursue the retail flooring business, and he wanted his son to join him.

Richard loved installing and was making good money with custom nail-down sand-and-finish work. “It was hard to talk me out of that [installation] and into this [the retail flooring business],” recalls Richard. “I’ll always be an installer first and look at the business from that standpoint. When you install, you have a job you can finish. But as a retail business owner, I don’t have that. Unlike with installing, I never know what tomorrow will bring.” Richard’s father “got him,” in Richard’s words, when he was in his mid-20s with an offer to run the installation department.

DOBSON FLOORS
The store that Bobby originally opened was called Dobson Floors. At the age of 38, Bobby retired and sold the business. Then, two years later, he bought out his noncompete and opened First Floors. Bobby and Richard were partners in First Floors for years, and Richard bought his father out around 18 years ago. Dobson Floors is still in operation today.

THE FIRST FLOORS MODEL
First Floors is positioned alongside one of the biggest highways in Texas-which is about to get bigger. The business has been in the same location for 42 years, so it is something of a landmark in the area. Lake Highlands, Texas, where First Floors is headquartered, features the largest concentration of custom homes in the country, which makes it a pretty good location for a flooring business, though First Floors does service the entire DFW metroplex.

Currently, about 85% of First Floors’ business is providing flooring for production builders. On a good year, the company will provide flooring for more than 3,000 new homes around the Dallas-Fort Worth area.

First Floors has one Carpet One showroom in Lake Highlands (Dallas) and another in Waxahachie, south of Dallas. The Dallas showroom warehouse also services the builder operation with hard surface flooring. Across the highway from the Lake Highlands Carpet One showroom, the company has a builder business office and warehouse, and carpet and pad are serviced from that location.

In addition, First Floors has a Fort Worth distribution center so hard surface installers can pick up materials for jobs in that region, rather than having them commute back and forth to Dallas.

Thirty-five years ago, the company had eight retail showrooms but, keeping a close eye on the economy and climate of the region, moved some of its eggs over to the builder basket when it saw that segment growing. That was clearly a good decision for First Floors, though it hasn’t come without challenges. “Builder business is a trade-off,” explains Richard. “You do ten houses to make the same money as one retail job, but if you get enough houses, you make it work. But you have to change hats. In the production builder business, the margins are razor thin. There are no salespeople on the production builder business because once the sale is made, it’s all logistics.” To its builder clients, First Floors offers carpet, sand-and-finish hardwood; vinyl plank and ceramic; showers and backsplashes. The price book for First Floors’ largest builder account is 86 pages long-and that’s only one customer.

Currently, the most significant challenge First Floors faces is cash flow due to delays from vendors. “I was just in the builder office last week, and they said it took two years to finish a single house,” Richard reports. “Due to the supply chain challenges, we have installed flooring in homes without paint, sheet rock or brick. I have never seen that in 36 years.”

In addition to its retail and builder segments, First Floors does insurance, custom builder, assisted living and mainstreet work. “My father always says, you have to treat the business like an engine; each segment is a piston, and you need them all to keep it running.” He adds, “Retail is as soft as it’s ever been.”

The company once had the largest insurance business in the Carpet One franchise. “Twenty years ago, we were the initial store in Carpet One that did insurance business,” says Richard, “and Carpet One flew me all around to teach me the business. I understand the systems and have installation knowledge. I’m also very tech savvy; some people call me the high-tech redneck.” While the company’s insurance operation is smaller right now, Richard says it’s a cyclical business that will come back around.

BUYING GROUPS
Years ago, Richard ran Carpet Superstores of Texas, which was the sixth-largest buying group in the U.S. The original four members of the buying group were all strong in builder work and had a great deal of talent in harvesting the various profit centers of the flooring business. The group had a lot of success. Carpet One, however, had a great deal of infrastructure for the retail flooring business-rack systems, selling programs, warranties-and Carpet Superstores decided it would be cost effective to join Carpet One rather than creating the retail programs and collateral independently.

A select group of Carpet Superstores decided to join Carpet One simultaneously. “We made them 40% larger in one day,” says Richard. “Our average store did more than their average store by a lot.”

Richard has served on the Carpet One advisory board twice and has also offered his expertise with regard to succession planning and technology.

THE NEXT PAGE
Richard is a country boy. He lives over 40 miles from the First Floors headquarters so he can spend his off time in the great outdoors. And while he likes the flooring business, he would love to spend more time in the wilderness.

Richard is happy having his family follow their passions and isn’t pressuring his son, niece or nephew to follow him into the family business. First Floors’ average employee has been with the business a decade, and Richard believes that those long-tenured team members who have toiled alongside him for years should inherit the business. “I will do a buyout for key employees,” he explains. “I don’t believe in ESOPs (employee stock ownership plans) because the owner gets paid quick but retains control. Those who have been here ten to 20 years have been named officers and have been training up, and I will be turning it over to them. I have a countdown calendar on my phone that reminds me I have 4,000 days until I retire at 65. Will I do it? I don’t know, but that’s my goal. I will do some kind of buyout and form a board of directors with me as chairman, but I will stay on as long as they want me to.”

He continues, “Once they own everything, if they have made a good amount of money, I will go over the financials with them and show them how to disperse the money. I always say, you never know how someone will be when they get off the plane with you in Vegas. I want to help them make decisions on the money-how much to carry over, take home and invest.”

Richard owns the First Floors buildings, so he will continue to earn rent. He likes to say that he will be the last Dobson in the floor business; the next generation of Dobsons will be in the landlord business.

Richard will have no trouble filling his time once he steps away, noting, “I’m not trying to toot my horn, but I have a graphic arts background; I’m a musician; I do beta testing for video games. I’m not afraid of anything. Learning is a necessity for me. I have to know.”

ONCE AN INSTALLER
Richard says, “When I started going to Carpet One meetings 30 years ago, they would say [from the stage], raise your hand if you’ve installed. Back then, everyone raised their hands. Today, it’s me and another guy. And they wonder why there is a labor issue. Who will teach the next generation of laborers? They all want someone else to do it, this mystery someone else. Most crews don’t know how the tools they have truly work; they just learned to use them from the guy in front of them. Today, we have single-generation installers; none have the depth of experience that we used to have, and the business owners don’t know what’s right and wrong.”

Twenty-five years ago, Richard taught his warehouse manager to install. He’s been part of Richard’s top wood crew since then and has raised seven kids off the income the career has produced, Richard says.