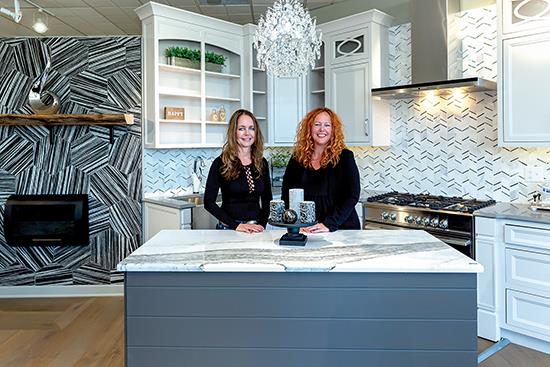 In 1913, Eli Franklin Marburger was on his lunch break from the flooring department of Indianapolis-based department store William H. Block when the proprietor of the corner drug store where he was eating mentioned that he needed new flooring and asked Eli if he’d be willing to measure the space. Eli agreed and got to work. When he was ten minutes late returning to his post at Block, his manager fired him. Eli explained his tardiness, “But I was seeking a flooring opportunity.” They said, “We are so busy. We don’t need you to go out and find work.” As the story goes, Eli started his own business, then called Guarantee Rug Company, the very next day.

Today, 108 years later, EF Marburger is operated by Eli’s great-granddaughters; Kelly Marburger Novak is owner of the business, and her sister Kimberly Marburger heads up the commercial division. The addition of Kim’s son, Connor Mullen, puts a fifth generation of Marburgers in the business.

A SUCCESSFUL SUCCESSION
Kelly and Kim took different paths into flooring. Kim was eager to enter the family business and joined her father there in the late 1980s, focusing on commercial and out-of-state projects. Kelly studied art and forestry at Indiana University, then followed her brother to Hollywood and worked in a variety of positions-some permanent, some temporary-including at Universal Studios and Warner Bros. She was having fun, but back home in Indiana, Kim had small children, and Kelly was sad that she was missing out on watching them grow up. Kelly’s father, Ronald, said, “Why don’t you use your art history background to help people pick out tile?” and Kelly took him up on it.

A path for succession wasn’t overtly laid out then-or ever-but Kelly reports, “Once I started, I wanted to be here forever. Dad would always give us advice and tell us how to deal with issues. There was not a lot of explicit grooming, but it was kind of like The Karate Kid. [Daniel, the main character,] didn’t realize he was learning karate until he needed it. When we took over, we knew how dad would handle things. He passed a lot on without us even realizing it.”

Kelly took ownership of the business just before Covid hit. In spite of that, she maintained optimism, reminding herself, “The business has been through the Great Depression and two world wars, it’ll make it.”

Ronald stayed on as a consultant for a year, coming in a few days a week. “We didn’t just pull the Band-Aid off. It was a slow transition and good for all of us,” says Kelly. “But he has been working here for 60 years now, and eventually, he said, ‘I’m done.’” He does still make himself available to advise when he’s needed.

A BRICK-AND-MORTAR FOOTPRINT
For many years, Marburger specialized in commercial work, including retail stores and offices. In 1990, Ronald moved the business from downtown Indianapolis to a northeast suburb of Indy called Fishers. At that time, it made sense for Marburger to branch out into residential work as well. Ronald bought a large plot of land that would allow for future expansion and built a facility that could serve both commercial and residential needs. Since that time, the population of Fishers has exploded, so, says Kelly, “It was really smart planning on my dad’s part.”

Over the years, the Marburgers have added on to the facility multiple times, and today, the showroom is around 30,000 square feet, which Kelly believes makes it one of the largest in the state. Three hours away from Chicago, Marburger strives to be a design destination. “In order to get something cutting edge, people used to travel to Chicago, but we built this in hopes of them coming here. We offer a unique variety [of products],” says Kelly.

Hardwood and LVT are the top-selling flooring products at Marburger. As expected, LVT is making gains. “I would say both the hardwood and carpet categories have gotten damaged by LVT,” notes Kelly. “Many customers still love hardwood and want it. But a lot of younger families, living in the city with kids and dogs, are ripping out their carpet and putting in vinyl. They don’t want hardwood. Vinyl is amazing; many people don’t realize how it’s changed. Carpet has gone away, except in bedrooms. It seems like in the Midwest it took longer for that to happen, but the main floor is all hard surface now.”

In addition to flooring, Marburger sells plumbing fixtures, countertops, and shower enclosures. It began selling cabinets three or four years ago. “It just made sense to do it all,” says Kelly.

HORSING AROUND WITH MARKETING
In front of Marburger stands a large bronze statue of a horse rearing up. In 2004, Ronald, an avid horseman, was building a new house and purchased the statue for his homestead. When the house wasn’t finished, Ronald had the statue placed in front of the store. Rather quickly, it became a landmark in town, and, considering how difficult it was to transport the piece, Ronald decided to leave it.

Over the years, the horse became an important part of the store’s image. The Marburgers had the horse incorporated in the business’ logo, and on the website, Kelly and Kim pose in cowboy hats. In addition, reports Kelly, “We did a few ads showing that our flooring is so durable that even horses can walk over it.”

A BIG COMMERCIAL BUSINESS
Commercial accounts for around 75% of Marburger’s business. “We do anything from a small backsplash to a huge hospital,” says Kelly. Indeed, the company has completed projects for JW Marriott Hotels; Lucas Oil Stadium, home of the Indianapolis Colts; Gainbridge Fieldhouse, home of the Indiana Pacers; as well as retirement communities and healthcare systems.

“Because we do such large jobs, we have substantial buying power,” says Kelly. “There’s not a whole lot we can’t get. We have dozens of trusted resources, and we can get anything at a fair price.”

“Our salespeople on both the commercial and residential sides of the business are really good. Everyone works nonstop to deliver what they promise to the customer, whether it’s flooring for a small bathroom or a giant stadium. We all try hard here,” says Kelly.

Kim’s son, Connor-who majored in business with a construction science minor and worked at several construction firms before joining the family business-is now helping his mother on the commercial side of the business.

THE ROAD AHEAD
Kelly reports that one of her ongoing challenges is living by and teaching her employees to live by the motto that the customer is the most important aspect of the business. “We need to focus on taking care of them, whether it’s painstaking or not. I try to get everyone to remember that we won’t go anywhere without our customers,” she says.

As for her role, Kelly is cognizant that she has big shoes to fill. “Every generation before me has expanded the business exponentially, and I want to continue to do that,” she says, “I want to expand-perhaps add another location or warehouse. The opportunity is there, but sometimes we may need to restructure and figure out how to grab it.”

FINDING FOLKS
With a convivial, familial work atmosphere, Marburger has a successful track record with employee retention, but when positions do open up, finding the right individuals to fill them can be hard. Over the years, Marburger has had four to five employees leave the firm for another job, only to return shortly thereafter. “Work can be stressful, but we want it to be a good environment to work in,” says Kelly.

The training program for Marburger staff has become more structured over the years, and Kelly likes to work with new hires directly. “Fewer people today can come in and just sit down and start writing orders,” says Kelly. “Someone with a design background may not know flooring. Or you may have a college grad without a construction background.” Recently, Marburger hired a soon-to-graduation construction major to work in estimating. “We are training her on field stuff now, but in estimating, she is fantastic. I think we will need to do more of that-pluck young folks out of college and groom them. You need to train them how you want them to be trained.”

As for installers, “Labor has always been an issue and will always be,” says Kelly. “We have a good core group, and they have worked for us for up to 15 years, but I struggle every day to find new installers and make sure the jobs match their skill sets.” Kelly isn’t sure what the answer is to the installer crisis, but she does believe the industry needs to work together to create a solution.