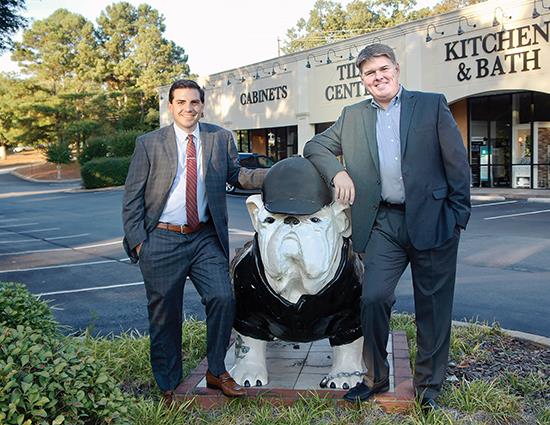 Best practices teach that a business must stand apart from its leadership; that within successful ventures, there is differentiation between the owner and the operation, so that the business may stand on its own two feet and, ultimately, endure, should the leader leave the helm.

For Athens, Georgia-based DCO Commercial/Dalton Carpet One, that concept was put to the test when founder and principal Mike Blanton passed away in March 2017. To his credit, Mike had well-oiled systems and a succession plan in place when he died unexpectantly, and though the details weren’t fully ironed out, Mike’s son Curtis and long-term employee J.R. Allred were able to step in and not simply keep the operation running but, indeed, lead it to thrive and expand in the years that followed.

A FAMILY IN FLOORING
Mike was born into flooring. His mother served as a bookkeeper for a hardwood company, and he began working as an installer while a student at Florida Bible College, where he was earning a degree in biblical education. In 1978, after graduation, he started a retail flooring operation in Athens, Georgia under the name Dalton Carpet. He found success, and, in the late ’80s, joined the Carpet One cooperative and took the name Dalton Carpet One (DCO). The retail store added a location in Eatonton, Georgia in 2000, and in the early years of the new century began pursuing commercial work.

Curtis entered the family business at the age of 12, sweeping the warehouse floor. After graduating from the University of Georgia (UGA) in 2007, he took a position in the Eatonton showroom and worked within that business for the next five years, which were, of course, recession years, but, all the while, Curtis had his eye on the commercial business. Curtis recalls, “The builder and housing markets were shrinking then, and we still didn’t have a lot of commercial share, so anything we were able to generate was growth. We took the opportunity to diversify. I knew enough about the commercial business to generate some new accounts and relationships. I grew my personal book of commercial business while working on the retail side.”

In 2013, when the builder business rebounded, the company almost doubled in size, yet with the outlook of the larger economy still uncertain, the leadership decided, “We are going to make hay now. We’re not going to turn anything down,” says Curtis. To that end, Curtis transitioned from the retail business to the back end of the commercial side, then eventually began managing the commercial operation. As it grew, the leadership team began to feel that operating under its retail name was limiting, so it split the sales and operations teams and established DCO Commercial Floors. Curtis explains, “We knew that we could either be average at both businesses or split them and excel. There are synergies, of course, and we have found leverage through some shared resources, but the two worlds are very different.”

He continues, “Though we are under one company and one ownership, today we operate under two separate divisions, and each has its own business model and brand. For the day to day, J.R. [Allred] oversees all residential business as the president of Dalton Carpet One, and I serve as the president of DCO Commercial Floors. Each division has its own designated staff, management teams, branding strategy, operations, installation, sales team, offices, warehouses and accounting staff. The processes are very different and what makes us successful is unique to each division. Some resources are shared between divisions and we capitalize on economies of scale only where it makes sense.”

BRINGING J.R. ON
J.R. applied for a job as operations manager at Dalton Carpet One in 2006, having moved to Athens while his wife was earning a degree at UGA.

Prior to his relocation, J.R. had been in coffee sales, and, during his interview for the job, Mike was intrigued by J.R.’s notable enthusiasm for coffee. In the course of the conversation, Mike asked, “So, how much coffee do you drink a day?”

Impressed by his passion, Mike gave him the job, though J.R. told him up front that he couldn’t guarantee him more than a couple of years’ work, since he and his wife would be leaving town after her graduation.

Ultimately, J.R. and his wife grew to love Athens and decided to stay. In Curtis’ early years in the business, J.R. was his boss. “My dad was very good about putting layers between his kids and himself,” Curtis recalls. “J.R. and I work very well together. His strengths complement my weaknesses and vice versa.

Following Mike’s untimely death, Curtis and J.R. purchased the business from the estate, closing the deal in December 2018.

DCO GROWS
DCO Commercial Floors is a rapidly expanding operation. The 2019 sales figure of $52.5 million represents a 27.5% increase over 2018. This figure includes the company’s commercial window treatments business, launched with blinds in 2013, which generated $4 million in sales this year.

In February 2015, DCO expanded its commercial operations out of Athens, opening a facility in Lawrenceville, Georgia, which is part of the metro Atlanta area. And then, in fall 2017, the company added a 30,000-square-foot facility on the opposite side of Atlanta, in the Smyrna area. This serves as an additional office for commercial flooring staff and the company’s main distribution center for commercial flooring, and it also houses its window treatment department. Today, the window treatment business includes blinds, motorized shades, roller shades and draperies.

The decision to add a second Atlanta-area office wasn’t just based on logistics, but also on DCO’s commitment to providing flexibility for its staff. “Our sales and project management teams have the option to work out of one of three offices,” explains Curtis. “We are a people-focused operation, and with technology today, it makes sense for us to provide flexibility for our team members. We don’t look at our team members as assets of the company but as the company itself! Assets are depreciated, but in successful companies, people are appreciated. So we believe that providing them with a good place to work is the most important thing we can do. That’s why we added the location-to serve our people.” Curtis points out that this added footprint and the flexibility it provides are assets from a recruiting and hiring standpoint as well.

In addition, DCO added an Austin, Texas location in the spring of 2018 after finding itself working long-term in the market and determining that it could better serve its Austin clients with a local warehouse and office. “Nobody sat down and looked for a hot market to expand into; it just happened,” says Curtis. “We started with a small warehouse, then moved to a 12,000-square-foot space with a full staff. We take advantage of economies of scale, so we don’t have to hire for every position. Some things are done remotely by specialists and some people wear multiple hats.”

DCO LEADERSHIP STRUCTURE
The executive team for DCO is made up of Curtis; Jesse Tranel, vice president; and Summer Brittain, director of pre-construction. This team serves as a focused group that makes decisions and sets the direction at the highest level of the company.

Curtis explains, “Summer and Jesse are involved and engaged in every aspect of the business and have knowledge in all areas. Because we have discussions almost daily and regular weekly meetings, they are informed and ready when a decision needs to be made. They share the same values and work closely with me, so they are able to make large-scale decisions independently with confidence. This unique approach is almost impossible to create with a traditional six to eight person management team. I have found this to enable us to remain nimble and flexible as we grow.”

THE ROAD AHEAD
The company’s challenges and goals are one and the same: keeping up with growth.

“Having the infrastructure in place to keep up with growth is key,” says Curtis. “This year, we planned for 20% growth, and we grew more than that. We are very sales driven. We want to capitalize on opportunities that come our way. With unemployment so low, no one is looking for work, so you have to go out and find it. Sometimes we have to slow down a bit to catch up; it’s a delicate balance.”

The entrepreneur emphasizes, however, that it isn’t just about filling spots but finding the right individuals-and that just isn’t an experience-based judgement. “We’re not just looking for someone with a flooring background, but someone who fits with our culture,” Curtis reports. “It’s very tempting to fill a spot, but the selection process is critical. If we hire the wrong person-someone who doesn’t fit with our culture-it ends up hurting us more than not having anyone at all.”

PRODUCT MIX
DCO’s goal is to offer a flooring solution for every need a customer may have. “The client wants to write as few contracts as possible,” says Curtis. “We are full-service flooring and project management.” With regard to product categories, DCO’s offering includes all the usual suspects as well as stone, concrete polishing and epoxy, which represents a very small part of the business.

DCO will sometimes complete concrete polishing through a subcontractor, and Curtis notes, “If the price with us costs more than hiring someone else, I tell the client that.” The company notes that the demand for concrete has flattened out a bit.