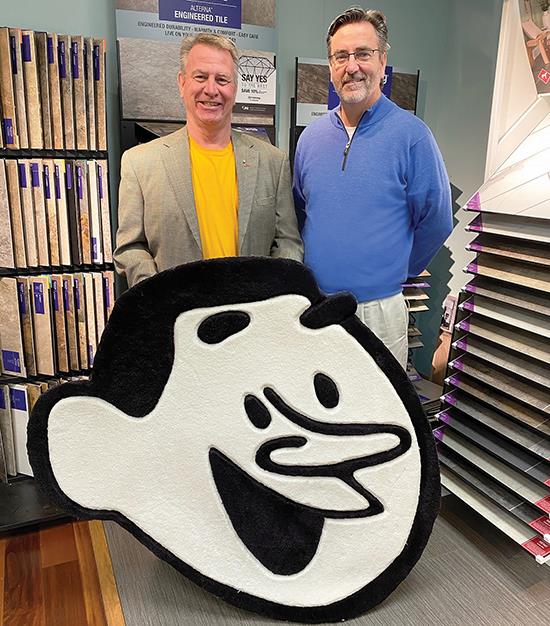 Custom Carpet Centers is a family-owned and -operated flooring chain-the largest independent retailer serving western New York state-with a unique and stand-out goal: selling happiness. The company, now run by the second generation of the McDonnell family, prides itself on its focus on solutions rather than price.

“It’s a disservice to the customer if we just try to hit a price point,” says president Jay McDonnell. “There is nothing worse than a customer calling back after a sale and saying, ‘I don’t love what I bought.’ We are not a discounter. Our average selling price is higher than the competition. We don’t do one-and-done pallets. We try to be the place where people go to get the real take on what they should buy to satisfy their needs. We sell happiness.”

HUMBLE BEGINNINGS
Prior to launching what would become Custom Carpet Centers, Joseph McDonnell, an electrical engineer by trade, dabbled in a number of fields-including a Catholic magazine, dental equipment and furniture sales-born out of “the combination of having five kids to feed and an entrepreneurial itch,” says Jay.

In the 1960s, a friend in the new home building business gave Joseph the idea to start Custom Carpet Centers in 1965, supplying flooring to homebuilders. It was a grassroots operation at first, with Joseph selling out of the back of the family station wagon.

“When we were little kids, Dad didn’t have a showroom,” Jay recalls. “The delivery trucks would show up to our house and unload the carpet rolls into our garage, then the installers would come, roll out the carpet in our driveway and cut it.”

In the late ’60s, Joseph rented a space to serve as Custom Carpet Centers’ first retail showroom; the space included an attached builder selection center. Then, in 1972, Joseph built a facility in Orchard Park, New York, which still serves as the business’ corporate headquarters today. That building, like the rented space, included a showroom and builder center but added a warehouse and office space as well. In the years since its construction, the facility has had six additions.

In the mid-’70s, Custom Carpet Centers began adding satellite locations, which at one point in time reached 12. The seven satellites open today have all been established for quite some time.

Jay began working around his dad’s business at a young age and continued through high school and college. After earning a master’s degree in advertising from Syracuse University, he landed a job at an advertising firm in New York City, but just before he made the move to the city, Joseph became ill. Jay asked the advertising firm to hold his job for six months so that he could step in for his father. That “six months” continues today.

In addition to Jay-who oversees sales, merchandising, marketing and operational aspects-two more of Joseph’s children joined their father at Custom Carpet Centers. Tom serves as vice president, handling hard surface purchasing and installation management. And sister Linda was the commercial contract expert (prior to her death in 2007).

Today, the business breakdown is about 15% to 25% builder, depending on the year, and 10% to 20% commercial, with the balance in retail.

THE CALLAHAN PROMISE
In the mid-1990s, Custom Carpet Centers held a contest to name the little man character that is a part of its logo. The contest netted 5,000 entries, and the leadership ultimately chose “Callahan,” both because it was Jay and Tom’s grandfather’s name and as homage to their Irish roots.

Today, the company bases its commitment to serve its customers in what it calls The Callahan Promise.
• No one will beat our prices on the same item. No one.
• For as long as you own your flooring, we’ll come back to fix installation-related items. Free.
• If you are not satisfied with your flooring, we’ll replace it. Period.

A FOCUS ON MARKETING
Given his hope of pursuing a career in advertising, it’s no surprise that Jay is passionate about that side of the business.

Regarding its marketing strategies, Jay reports, “We have really come a long way in the last five years. We are spending a lot more time, energy and money on our digital message and generating leads through the Internet and our website. We have really put a lot of effort into creating interest before people come into the store.”

Advertising on the local TV affiliate apps is one of the strategies Custom Carpet Centers uses to keep its name in front of consumers 24/7. With each of the three-CBS, NBC and ABC-the company has click-through ads with guaranteed visibility no less than 50% of the time. Says Jay, “This generates pretty big numbers, over 8,000 visits to our site per month, a lot of it through that type of click-through advertising. When consumers click through to the coupon or visit the site, a lead is formed for the store.”

The challenging aspect, reports Jay, has been convincing Custom Carpet Centers’ RSA’s that “a virtual lead is attached to an actual human and shouldn’t be viewed as anything less. You can’t see smell or hear a virtual lead, but the real humans behind them expect answers and responses, just the same. So it has really been a learning process to get them to understand the value of virtual leads and to treat them with the level of respect they deserve.”

The company also advertises through TV, radio and print-mostly insert wrappers in the newspaper. “Our strategy is to be in as many places as we can, as often as we can,” notes Jay.

DEFINING VALUE
Custom Carpet Centers’ commitment to providing value hinges largely on training its staff to do so. In flooring sales, the conversation can quickly turn to price, unless staff is trained to focus on more important aspects. “We don’t go for the short dollar by beating price,” says Jay. “We try to sell a customer what they need-not what they want to pay.”

Twenty years ago, the McDonnells purchased an existing GCO franchise in Tonawanda, New York, where they also have a Custom Carpet Centers store. GCO is a franchise of factory-direct wholesale floorcovering dealers. Six years ago, the group decided to disengage from the franchise and rebranded the operation as Outlet Carpet & Flooring.

“We have separate workers, installers and inventory,” says Jay. “We may move close-out products from Custom through that operation, but it is a separate business entirely.” Under Custom, installation is included within the sale and facilitated by the business. On the Outlet side, the customer schedules with the installer directly and also pays them directly.

INCENTIVIZING THE BUYER AMID THE COVID SHUTDOWN
New York was one of the most aggressive states regarding lockdown regulations. Custom Carpet Centers was closed for ten weeks and did some curbside pickup sales during that time, but as it focuses on professionally installed flooring rather than DIY-type products, that business was limited, though it was able to operate its commercial and builder arms during the shutdown-with many constraints.

While the doors to the retail location were closed, the company retooled its digital messaging to a ‘buy local’ theme and incentivized consumers to purchase savings certificates that could be redeemed for product once the store re-opened. “The day we opened back up, the floodgates opened,” recalls Joseph. “Many people came in and said, ‘We’d rather buy local than from business destroyers.’ ”