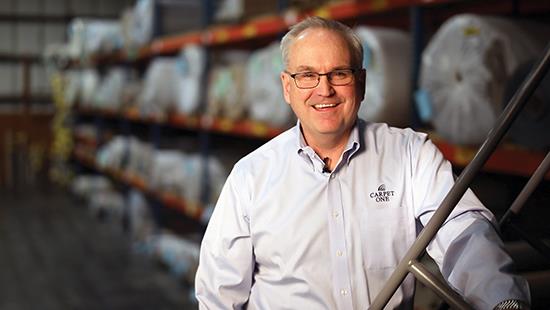 Randy Mostad, co-owner of Carpet One of Billings, says, “The quality of your people determines the quality of your business, and the integrity of your people determines the integrity of your business.” This conviction isn’t only lip service at Carpet One of Billings; Mostad and his partner, John Erbacher, invest in attracting and retaining a high-caliber team that, in turn, rewards them with a solid foundation and years of service.

THE ENTREPRENEURIAL DRIVE
It was, in fact, this team approach that attracted Randy to join Carpet One of Billings as an employee. Though Randy’s father, Loren, opened a flooring store in western Montana in 1958-the business moved to Missoula in 1967-Randy did not go to work in the family business after college but instead joined the petroleum industry, relocating to Billings.

In his early 30s, however, Randy caught the entrepreneurial itch. Having grown up in a small-business environment, he found it appealing that ownership provides “a bit more control over your own life,” but he was also aware that he didn’t have the money or the family connections to get into ownership in petroleum.

In 1994, Randy was purchasing flooring for his home at Carpet One of Billings. There, the owners of the business, Bob Erbacher and Duey Gililland-who had started the enterprise in 1982 as The Carpet Connection, joining Carpet One in the late ’80s-learned who Randy was and said, “It’s rare that you meet someone who grew up in flooring. We want you to come work here.” After five years, Bob and Duey agreed to give Randy a 7% share of the business, which appealed to him greatly. Four years after Randy got partial ownership, Randy and Bob’s son John bought the business from the elder duo, through a structured plan-business first, building later-that provided stability for Bob and Duey in their retirement.

In addition, Randy’s son Tanner has now worked in the business for a decade. And when the store’s current manager retires in 18 months, Tanner will step into that position.

THE CARPET ONE FAMILY
Randy’s brothers, Chris and Mike, today run the business that their father started in Missoula (now called Lorens Carpet One); the stores are a 4.5-hour drive apart.

And Randy reports that he has earned additional “brothers” in the business through the Carpet One organization. Randy, John, Chris and Mike have a tight relationship with a group of Carpet One dealers spanning Montana, North Dakota, Wyoming, Idaho and parts of Washington. “We work very closely together,” says Randy. “We recently had 17 stores come to Bozeman [Montana] for a one-day sit-down. A few vendors came in, and together we bought a few truckloads to divide up.”

In addition, the group gets together annually to do something recreational. “Carpet One is very much about family,” says Randy.

EMPOWERING PEOPLE
One way that Carpet One of Billings has managed to establish and retain a high-quality team is through a profit-sharing program, which funnels earnings into employee retirement accounts. This approach obviously gives employees incentive to give their best, as it quite literally puts dollars in their pockets.

That investment has seemingly paid off; the average tenure of Carpet One of Billings’ sales staff is 16 years, and the first interior designer that Mostad and Erbacher hired in 2000 is still with them. In fact, Carpet One of Billings recently had a retail sales associate retire at the age of 59 after 28 years with the business. Mostad reports that, while the man was a shrewd investor, Carpet One of Billings’ profit-sharing program played a role in enabling the man to meet his retirement goals at an early age.

Of course, it isn’t just about throwing money at the team but also making Carpet One of Billings a great place to work. “My manager arrives at 7 a.m. I get in at 7:15 a.m.,” explains Randy. “We have the coffee made before anyone else arrives. We fix the toilets. I remove the snow from the parking lot, and the manager, Ron, clears the sidewalks. We don’t just come in and tell people to do things. If there is a claim, we handle it. We don’t get the salespeople involved. We deal with the challenging issues ourselves, and we compensate our employees well.”

Unfortunately, many of Carpet One of Billings’ senior employees are nearing retirement age. “We have five big recent or coming retirements, so we are looking for young, talented people eager to grow in this industry,” Randy reports. The installation side of the business is facing similar challenges.

MORE STORES
In 1995, Bob and Duey opened a Floor Trader store in Billings and then launched a furniture retail location called Stone Mountain Leather Furniture Gallery. Randy and John purchased the furniture store around 2002 and the Floor Trader business in 2006.

Then, in 2012, Randy and John opened a second Carpet One of Billings, about seven miles away from the original location. In addition, seven years ago, the pair launched a cabinet business, which they recently sold to the business’ manager, and four years ago, they launched a ProSource, as part of a CCA pilot program for smaller markets that has proven very successful in Billings.

The Carpet One stores sell a full range of flooring. Carpet accounted for 75% of sales 25 years ago, but today it is around 35%. Hardwood can be a challenge in the high arid desert climate, so Carpet One of Billings works closely with customers who desire that product. But LVT, and especially SPC, are a good choice for the low-humidity region. The company has a broad ceramic offering, as well. “Ceramic is the highest risk but offers the lowest margin. While it accounts for 5% to 8% of sales, it takes up between 15% and 20% of the showroom space,” explains Randy. “You have to have a wide range of looks, especially in the bling. My designers say that bling is the lipstick of a kitchen, especially the backsplash. It makes the difference between an average kitchen and a really nice one.”

Between 15% and 20% of Carpet One of Billings’ work is commercial.

TAKING RESPONSIBILITY
Randy is very proud of the fact that Carpet One of Billings recycles carpet cushion and is the only dealer is the area to do so. “There is no value in it financially, but we have kept 40 semi-loads of carpet cushion out of the landfill, 1.5 million pounds,” says Randy. “It gives me a good, warm feeling.”

Randy’s commitment to doing right by the environment is also evident in his car choice: a Smart car, which has his company logo emblazoned on the side. As the face for the Carpet One of Billings brand-he is the spokesman for its television spots-Randy feels strongly that he must behave responsibly and respectfully when driving around in a vehicle so evidently representing his brand. “The community expects the person in car to drive the same way as he acts on TV,” he says.

But most important to Carpet One of Billings is being a responsible partner to its customers. “We stand behind what we do,” says Randy. “Sometimes we take it on the chin. It can be an expensive proposal at times, but you have to do it. You have to stand behind your people, your products and your service.”

DESTINATION LOCATION
Being in a state with no sales tax has proven quite beneficial for Carpet One of Billings, especially as all the surrounding states do have sales tax. In the northwestern U.S., big cities are few and far between, which means that Randy and John’s store attracts buyers from a broad territory. “There are no major shopping areas between Billings and Spokane, Washington, which is an eight-hour drive to the west; or between Billings and Fargo, North Dakota, ten hours east; or between Billings and Denver, Colorado, eight hours south, so we have customers come in from North Dakota to mid-Wyoming and all the way from Canada,” Randy explains.