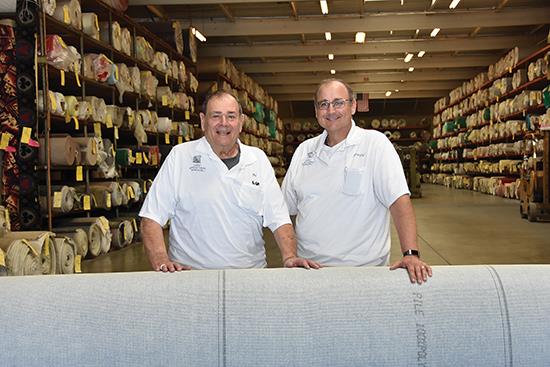 The retail store is an actual warehouse, not polished or style-focused in the way that upscale flooring stores are today. It sells on price. And it is all-in with a product category that continues to lose marketshare. Yet, when many contemporary small businesses are wringing their hands and watching their savings dwindle amid COVID, Sapper has no doubt Carpet Manufacturers Warehouse will weather this pandemic-its second; it lived through 1918’s Spanish flu outbreak-due to the financial and buying strategies passed down through the Sapper line.

STARTING OUT
In 1918, 13 years after emigrating to the U.S., Karl launched United Paper Company, selling paper products, twine and linoleum as a wholesale distributor in Los Angeles, California. In the 1920s, Karl changed the business name to Karl Sapper & Sons and, in the 1930s, added carpet and padding to the product mix, eliminating paper products.

Karl’s sons, Herbert and Jack, entered the business, working alongside their father, but, sadly, Karl outlived both of them (Jack died in 1948, Herbert in 1964). When Herbert passed away, his son Al, who had been working in the business part time since 1956, left his career in electrical engineering to join his grandfather in the business full time.

In 1969, the grandfather-grandson pair moved the business from L.A. proper to Commerce, California, a suburb. Karl passed away a year later.

While Karl never wanted to be in retail, Al believed that to be the right direction for Karl Sapper & Son (Sons was changed to Son after Jack died). So, in 1971, he transitioned the distribution warehouse into a retail showroom-though it maintained its warehouse feel-and changed the name to Carpet Manufacturers Warehouse. In addition, that year, Al took his son Howard to his first flooring market, and Howard recalls that it was at that event that he “fell in love with the carpet business.” In 1980, the showroom was expanded to 50,000 square feet.

Says Howard, “Our family history and traditions have been instilled through the business. We enjoy existing in the shadows. We have never had the desire to have 50 locations. My dad was taught by his grandfather, you only have two eyes, how many places can you watch at once?”

Howard believes that each generation plays a role in moving the business forward. Al transitioned the business from distribution into retail, and, while Carpet Manufacturers Warehouse has been computerized since the late ’80s, Howard moved the business into the digital age, launching a website and social media efforts, which are the company’s primary form of advertising today.

At the age of 80, Al still does the books for the business, though these days he works from home to reduce his COVID risk.

PROVING YOU'RE ESSENTIAL
When the mayor of Los Angeles shut down nonessential businesses in late March due to the coronavirus outbreak, it was incumbent on Howard to prove that Carpet Manufacturers Warehouse was an essential operation and therefore permitted to stay open. “The city of Commerce gave us a shutdown order and basically said prove that you are an essential business,” recalls Howard.

“Fortunately, we do a lot of business with property management and home sales,” he continues. Howard submitted his request to stay open based on these grounds, also outlining the safety protocols it would follow during the outbreak. The city came out to check that his story was true, and that his protocols were in place and then gave him the green light.

“I feel safer in my business than anywhere else,” says Howard. “We have very stringent protocol here, more stringent than other places. In fact, we got a nice Yelp review about six weeks ago about how safe a customer felt coming in here.”

STAYING TRUE TO STRATEGY
So why hasn’t Howard chosen to move the business into hard surface in a time when consumer preference has shifted so dramatically away from soft surface flooring?

Carpet Manufacturers Warehouse has certainly contemplated such a move and, at different times throughout its history, has purchased lots of hard surface flooring and successfully sold it, but for many reasons, the family has determined to stick with its wheelhouse.

Explains Howard, “We have talked about bringing in hard surface from time to time, but we really prefer to sell products made in the U.S. I looked really hard at laminate when it first came out, and the natural path would have been for us to buy a container-load from China. But we looked at the samples, and my father felt that the product wasn’t engineered well. Why risk our reputation on a poorly engineered product? In addition, we don’t do installation, and as a product-only sale, the margins on laminate were too low, and the risks were too high. So we made a family decision not to sell laminate. We may have left money on the table, but we sleep well at night.”

In addition, Howard reports that, regionally, consumers still appreciate carpet, “In this marketplace, carpet is desirable. It’s not a scourge like it seems to be on HGTV.”

He continues, “Of course, it’s difficult that carpet once covered 75% of household square footage when I was growing up, and it now covers only 35%. But we have worked to mitigate that [preference change] in our market. We have a tremendous amount of inventory. We keep products from close to the top [of the price range] to the bottom and have immediate availability. And we have good prices. Buying is a strength.” Howard explains that “buying well” is a combination of both looking for a good value and having a good eye for what will sell.

“Of course, I’ve made some tremendous mistakes,” the leader continues “but we buy well and keep ourselves capitalized well. It’s how we survived the Depression. Our philosophy has always been to remain well capitalized. We don’t pull every dollar from the business, and it’s helped us survive the downturns. COVID put a crimp in us, but we will survive. We’ll tighten our belt where we need to. Our thinking for the last 50 years has been that we make our money on the purchase side. If we purchase right and don’t have to sell quickly, we can make a slow dime, rather than a quick penny.”

COMMITTED TO RECYCLING
One way that Howard has worked to bolster carpet’s reputation is by being an advocate for recycling the material. “LVT can’t be recycled, and the manufacturing isn’t very green,” he says. “Carpet has a better story than that.”

Initially, Howard became interested in carpet recycling when California’s AB 2398 went into effect in 2011. Howard explains, “Both my father and I were interested in knowing more about where the money went” and wanted to make sure that the state wasn’t “charging gold to put out bronze. The assessment used to be a nickel a yard, now it’s 35 cents-a seven-fold increase in ten years’ time. We have a huge amount of inventory, so we pay that fee. When we turn around and resell the carpet, we charge the customer the fee, but everything sitting on our shelves we have paid the assessment for.” Ultimately, that interest ignited activism.

Howard started going to the public forums when AB 2398 started, then the Carpet America Recovery Effort invited him to join the advisory council from 2015 to 2016. When that was disbanded, an advisory committee was formed through the state of California and CalRecycle. Howard applied and was accepted to that. “I am looking at things from the perspective of not only carpet dealers but also consumers,” he explains. “I deal with consumers on a daily basis, and I like to be able to tell them what the assessment is used for. I would love to see more retailers get involved.”

Carpet Manufacturers Warehouse has a trailer onsite at the store for its contract installers to dump their used carpet and pad for recycling. “It benefits the installers because they don’t have to go to landfill, and we have moved several million pounds to recycling since we started,” says Howard.

SURVIVING THE CHANGING TIMES
Continued adaptation is Howard’s number one long-range goal for the business. “You adapt, or you become extinct. We don’t have any desire to go extinct,” Howard says. “We have a lot of family investment tied up in this company, and we want to make sure it continues to provide for both our family and our employees’ families.”

The challenges facing Carpet Manufacturers Warehouse are both obvious-such as COVID and the labor shortage-and less obvious. For instance, one smaller trend that Howard bemoans is the use of property management firms by property owners. “We have always done well with property owners, but the next generation is not wanting to get that call at 2 a.m., so they are turning the operation of their properties over to firms,” Howard explains. Getting a foot in the door with these larger groups is a challenge, but one that Howard believes Carpet Manufacturers Warehouse will work through.

Ultimately, the business will lean into the tenets that have guided it through 102 years, though sometimes utilizing them in a new way. “For a long time,” Howard says, “we didn’t publicize the fact that we were a family business. My dad didn’t use that. but I have been pushing it a bit.” While the business may not have branded itself as “family,” it has long operated that way; Howard notes that many of his customers have been buying from Carpet Manufacturers Warehouse for decades and working with the same Carpet Manufacturers Warehouse staff member each time. “They like that,” he says.

THE RESIDENTIAL/COMMERCIAL SPLIT
Howard’s purchases are about evenly divided between residential and commercial products. However, the company finds that a good portion of the commercial products end up in homes, specifically those designed for hospitality use.

The company also has a decent-sized carpet tile offering and reports that these products often end up in home office settings.