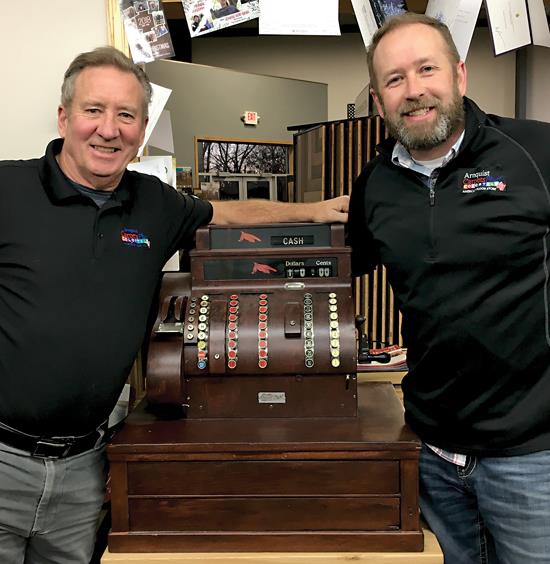 Wisconsin-based Arnquist CarpetsPlus is celebrating 89-year-old of business this year, a feat made possible by the company’s willingness to reinvent itself. Arnquist CarpetsPlus-currently under the leadership of Tom and Adam Arnquist, the third and fourth generations to run the business, respectively-has not only relocated but also transitioned methodically yet radically through several different product categories (hardware, furniture and flooring) to see its tenure last to the fourth generation.

INVENTING & REINVENTING
The Arnquist family opened a hardware store in 1930 in Hoffman, Minnesota, a small town 150 miles northwest of Minneapolis. In its early years, the business was serving a vibrant farming community. As there were relatively few retailers of any sort in the area, the business delved into furniture and flooring as add-on businesses, stocking a bit of sheet vinyl and then some carpet. The multi-faceted operation continued on for years with toes in each of these ponds.

However, as time passed and mechanization enabled individual farmers to farm larger plots of land, the population of the area decreased to around 600, which stressed the operation. In addition, for many years, shoppers were willing to make the trip to Hoffman to shop at Arnquist, but eventually pulling them in became more of an uphill battle.

Around 1975, the family dropped the hardware segment-maintaining both its furniture and flooring businesses-and soon launched a full-fledged flooring operation. “Furniture and flooring were really tied together then, in our operation and many others,” recalls Tom. In 1999, Tom-who believes it’s better to be great at one thing than good at several-made the decision to eliminate furniture and focus solely on the flooring business. He also made the decision to join the CarpetsPlus group.

And, in the early 2000s, Tom and Adam decided to move the store 20 miles east to Alexandria, a lake community with a population of 12,000 in winter and over 20,000 in the more temperate months, leaving not only the town but the space it had operated in since its inception.

Initially, the business leased a space in Alexandria that wasn’t ideal, as it didn’t offer drive-by visibility, but in 2012, it purchased a location with good frontage that offered a drastic increase in square footage as well.

A TRUE TEAM
Arnquist’s roots as a small business in an intimate community drive its culture and approach. “When you’re a fourth-generation retailer in a small community, you focus on relationship retailing,” explains Adam. “You focus on the customer. Every interaction is not going to go well. There are going to be bumps, but it’s how you take care of the customer through the bumps that matters.” That may sound like a simplistic approach, but Arnquist has the Google reviews to back it up-a 4.9/5.0 star average.

Ultimately, Adam believes that today’s customers aren’t seeking a sleek sales pitch but a well-informed sales counselor who will bolster the decision they have already made. “Eight out of ten customers who walk through our door have been online-on Pinterest, Houzz or another site-and that qualifies the customer for us,” explains Adam. “We ask initial questions, and they show us what they want, then we put on our counseling hat. Customers know what they want. They just need that support.”

To create a team of effective sales counselors, the Arnquists employ a unique hiring strategy, “We hire based more on the dynamic of the person than on sales experience,” says Adam. “During his interview, I remember asking the man who is our top salesman today if he’d been in sales before. He said, ‘I sold a used pickup truck on Craigslist once.’ Last year, his third at Arnquist, he sold $1.5 million.”

Key to the business’ employee development approach is providing team members the tools to succeed, not just as employees but as individuals, subscribing to the concept of intrapreneurship, which empowers employees to think and act as if they are owners. “It builds confidence,” says Adam. “There’s no micromanaging. That’s where growth comes from.”

Tom (who Adam describes as “the most dynamic salesman I’ve ever seen”) and Adam instruct their sales staff to network and build a varied book of business for themselves that will serve them well in the future. “It’s important for them to serve multiple sectors, so if one dries up, they will still be able to make a living,” explains Adam.

In addition, Arnquist’s sales team members are trained to educate the consumers, a strategy the Arnquists believe is key to successful sales. In fact, several of the business’ Google reviewers call out Arnquists’ educational approach as one of its greatest strengths, with one writing, “We stopped [at Arnquist CarpetsPlus] to look at flooring materials for a townhome we are remodeling in Arizona. Adam Arnquist talked with us for a long time about flooring materials and pros and cons of each material even though we weren’t buying there. I think he was the most knowledgeable flooring professional I’ve ever spoken to.”

The sales training process isn’t the formal books-and-paper sort but more of a hands-on approach. “It’s about coaching and training, on-the-job training. We want our employees to know that it’s okay to fail. They will fail. But that’s how you learn.”

JOINING THE GENERATIONS
Tom had just graduated college and moved home to work in the family business when his father passed away unexpectedly, so Tom took on running the operation in its entirety. Adam reports that his father worked ten-hour days seven days a week for 40 years.

Throughout his childhood, Adam idolized his father and always intended to join the business-studying sales-but his future wife wanted to move to the Twin Cities, so off they went. There, Adam worked in the wholesale and manufacturer arenas of flooring for several years-ultimately serving as district sales manager for Dixie over five Midwestern states.

Eventually, his father told him that it was “now or never” for joining the family business, and Adam jumped in wholeheartedly. Reflecting on his experience versus his father’s, Adam says, “I feel like I’m still learning at 38. I can’t imagine what it would have been like not to have a father to lean on in the business, but my dad made a go of it for 40 years on his own.”

Adam and his wife, a designer, also own a second business called Börd, which manufacturers custom furniture.

BIG CHANGES, REAL PAYOFF
Adam left a salary with Dixie that he knew the family business couldn’t afford initially, so he and his father implemented a plan to grow. “We did a market analysis. We knew that if we wanted to sell more, we would have to have more salespeople. My dad and I made a plan six and a half years ago to go into growth mode. It has been lots of investment and lots of fun.”

One of the first things the pair committed to was the use of Measure Square and an employee to run it. “We knew we could double our sales with that tool,” says Adam. With the employee focused on the data side, Tom, Adam and their sales staff could set their sights solely on selling. “Once we started with that,” Adam recalls,” we realized that we needed a larger warehouse and then a warehouse manager. Then we needed more competent subs to accommodate our growth. We were able to achieve all that. At this point, we have outsold our capacity. We can’t sell more because we don’t have more qualified people to install.”

In those six and a half years, the company has nearly quadrupled its sales-exceeding its initial target significantly. The contemporary iteration is about 35% builder work; 20% commercial; and the rest is multifamily and true retail. Recently, the company purchased concrete polishing machinery and is tiptoeing into that business, cross-training its warehouse manager to run the machinery.

VENDOR PARTNERS
Adam seeks to build Arnquist’s standing with its vendor partners, “When I was on the manufacturing side, we labeled our retailers as A-, B-, C-, D- level [according to their level of importance]. I don’t want to be a C- level partner to anyone,” he says.

For that reason, he has limited his relationships to around 30, and he expects true collaboration from these manufacturers. “I ask all my vendor partners for their quarterly expectations and goals, so that we can hold each other accountable, tracking performance for both them and us,” he reports. “This has really strengthened our relationships.

THE COMPETITION
In its retail business, the company targets all types of customers. “As we have grown, we have had to focus on all categories and hit all markets to be sustainable,” says Adam. “To be successful, it’s all about our mix.

When Arnquist set out to grow, it identified another local retailer as its greatest competitor; they later found out that the company wasn’t as large as they thought. “Our biggest competition today is about 50 miles outside of our market, a low-priced dealer in a small town.” If it seems surprising that competitors are so few and far between, consider the region that Arnquist is serving. Adam estimates that there are roughly 30 to 40 small towns of between 400 and 2,000 residents in the 60-mile radius that he targets.

While Alexandria does have a Menards-not a direct competitor to Arnquist, in Adam’s opinion-it doesn’t yet have a Lowe’s or Home Depot, operations that Adam believes would pose greater competition. Says Adam, “In the long-term, staying relevant in the industry and to our consumer is our greatest challenge. We don’t have a Lowe’s or Home Depot. If we had one, I’m sure it would take share, but I believe that if you do what’s right and follow the customer’s lead, things work out.”

Ultimately, in the face of any competition that comes his way, Adam is willing to do whatever he can to usher the business into its fifth generation of family ownership. “I want to make sure the company survives until its 120th birthday,” he says. “If you look at the history of the company, we have changed platforms three times. Sometimes I wonder, what will I be selling by the end of my tenure? I hope it’s flooring, but it’s the leader’s job to determine what needs to change to keep your business viable.”

INSTALLATION SOLUTION
Regarding the installation crisis, which is impeding Arnquist’s further growth, Adam points out that flooring installers are the only trade workers attaching something to a residence or commercial property who are not required to be certified in doing so. Therein lies the crux of the problem-and a potential solution, in Adam’s opinion.

“The answer to the installation crisis is that we need a uniform training program throughout the country with continuing education as a standard,” he says. How do we get there? Adam is hopeful that an industry-wide organization, such as the World Floor Covering Association, will lead the charge.