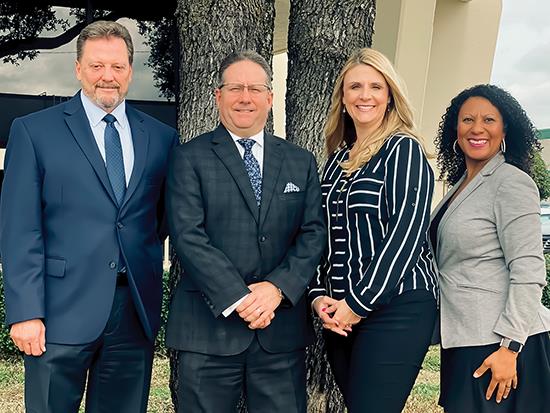 Texas-based commercial contracting firm All Commercial Floors has employed an aggressive growth strategy since 2012, expanding its footprint from three locations to 12 and its revenues from $18 million to $70 million in the ensuing eight years. Kevin Jones, president and CEO of All Commercial Floors, made the decision to grow his business through both acquisitions and organic growth to ensure that when it comes time to sell the operation, it will net what Kevin desires. The goal he set in 2011 was to grow to ten locations from coast to coast. Today, he has surpassed that initial vision and now has his sights set on the possibility of adding two additional locations and growing revenues to at least $135 million. “Once we hit $110 million,” explains Kevin, “we will see what growth opportunities are out there. You never know who we might want to take on. In ten years, I see this company being a quarter to a half billion dollar organization.”

ROOTED IN FLOORING
Kevin’s father, Dave Jones, was one of six individuals who started Evans & Black in 1960 with a single tufting machine. Armstrong purchased the business in 1967, and Dave took the opportunity to exit, using the monies he earned from the sale of his equity to open a retail flooring store in El Paso, Texas called Jones Floor Coverings and Window Designs. In 1980, the name was changed to Texas Contract Carpets.

At the age of 14, Kevin began hanging drapes for his father’s business and continued working in the operation through high school. “As my brother and I got older,” Kevin explains, “we convinced my father to add apartment work,” a venture that served it well. The company eventually expanded to four Texas locations, adding Dallas, Lubbock and Austin.

However, in 1987, with the Texas savings and loan crisis in full swing, the family business found itself in trouble. Explains Kevin, “The business was making around $2 million in annual revenue then but was upside down due to our general contractor clients going out of business.”

In 1994, Southwestern/Great American, which owned Metroplex Flooring, recruited Kevin, and he decided to leave the family business, a decision that saddened his father and siblings. But the move would prove to be a valuable one for Kevin, as it introduced him to the healthcare market and taught him how to “travel” crews-both keys to his future success.

Kevin parted ways with Metroplex in 1998 and started All Commercial Floors out of his Fort Worth garage in 1999. Ultimately, Kevin’s relatives forgave his departure from his father’s business, and Kevin’s sister Stacy joined on as one of the co-founders of All Commercial Floors; she serves as an executive vice president today. In addition, Kevin’s brother Jeff works in the recently acquired Holland Surfaces (previously known as Holland Marble) division, which is focused in exterior cladding and both distributor of TheSize Surfaces and manufacturer of Neolith Sintered Stone. In total, eight family members now work for All Commercial Floors.

POSITIONED FOR EXPANSION
In the early days of All Commercial Floors, Jones reports “we did whatever work we could land.” However, 2003 was a year of change for the business. First of all, the company was projected to hit $4 million in revenue that year, and Kevin believed it was time to add a good accountant to the team. He hired Joyce Payne, who today serves as CFO.

Having Payne on board and more revenue to work with meant that All Commercial Floors could begin pursuing larger projects. Leaning into Kevin’s expertise at Metroplex, the company began chasing healthcare work heavily. “From 2003 to 2011, we were 98% healthcare,” recalls Kevin. “My dad always told me, ‘Don’t put all your eggs in one basket.’ But I was lucky because I picked the right basket.” Today, healthcare remains All Commercial Floors’ bread and butter (accounting for 60% to 65% of revenue), but the company serves a broader range of sectors.

Secondly, 2003 brought expansion of the business’ footprint from a single location to multiple locations as well as an expansion of its offering. “When we started our expansion, we didn’t want to simply grow revenue but diversify,” says Kevin. Today, the company is only one step away from being what Jones calls a “one-stop-shop.” “The only product we don’t currently have in our offering is poured surfaces,” he notes. “We get third parties to do that currently, but we are looking for the right person or company to close that final hole in our offering-experts in terrazzo, epoxy and concrete. Once that is filled, there won’t be anything we don’t offer in-house.”

Last year’s acquisition of Holland enabled the company to bring custom fabrication and custom water jet cutting into its portfolio.

TRAVELING TEAM OF INSTALLERS
With today’s major healthcare organizations wide-reaching and active across many markets, Kevin believes that the travel-ability of All Commercial Floors’ installation crew is a significant boon for its clients. “We have the ability to go anywhere,” explains Kevin. “That capability is important because of the consistency it enables us to offer. We have 100 installers who travel from hospital job to hospital job. Some of our top clients know our installers by name. They will say, ‘We have X on this job.’”

In addition to its top-notch and mobile installation team, All Commercial Floors has another “secret ingredient,” a proprietary, highly detailed management process called The System. The System was developed to manage projects over 25,000 square feet from cradle to grave. Rolled out in 2005, The System is so successful that clients now refer to its individuals elements by name, and Kevin contends that The System could be employed on any large project worldwide to great success.

KEY HIRES
“My dad taught me to hire people smarter than me. The bar’s not set too high there,” Kevin says with a laugh, “but I feel very good about the quality of our employees.”

He points to two recent hires as strong additions to the All Commercial Floors’ team.

Denise Perry spent 20 years as a designer with Perkins + Will when Kevin recruited her to All Commercial Floors to serve as vice president of marketing. Perry has been hard at work to develop new branding for the firm, and Kevin believes that is key to the business earning “a different level of word of mouth [marketing].” Perry has been on board for two years.

In addition, in the summer of 2019, Kevin recruited Wade Pasch, who ran Tandus’ Source One department for 15 years. Pasch serves as executive vice president of operations for All Commercial Floors, and Kevin describes him as “an amazing right and left hand for me.”

CREATING APPEAL
As labor is an area of strength for All Commercial Floors, the shortage of laborers in the market is a real concern. “There is a massive shortage of labor in our environments because Millennials and Generation Z individuals are more technology-driven,” says Kevin. “Unless we can start getting this group engaged, through trades schools and the like, it will become a bigger problem.” All Commercial Floors is committed to educating and increasing the skill level of its installers.

Another challenge that Kevin actively battles is indifference among employees. “Complacency is the biggest challenge that senior managers face,” he says. “What are you going to do to keep people inspired and driven? We have weekly meetings in each department and do fun things, like retreats and challenges where winners earn prizes. We try to do things that keep our employees engaged.”

LIGHING THE FUSE
After nearly 20 years as an unattached entity, All Commercial Floors joined Fuse in 2019. Kevin reports that he was wooed by multiple organizations for years but enjoyed his standing as an independent firm.

What changed? Nothing really. Kevin feels that Fuse allows its members great flexibility to operate on their own terms while offering the benefits of partnership-and partnership is key for Kevin. He wanted to be part of an organization where he would not only get but also give. “Each member has something to offer,” he says, “and we have good things to bring to the organization. Plus, I really like Geoff Gordon.”