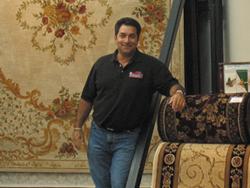 A ten step formula has been instrumental in Frank DiFiglia’s success in building a 20,000 square foot showroom in Howell, New Jersey into a $5 million business. It’s kept him aggressive and creative in the face of strong competition and a weak housing economy.

DiFiglia’s store, Just Carpets and Flooring Outlet, has at least ten competing flooring stores within a mile, in one of the region’s fastest growing areas. In that crowded environment, he’s always looking for ways to stand out by doing things a little differently in every aspect of his business. About 95% of his sales are residential replacement; the rest goes to small home builders.

DiFiglia’s business starts with his employees. He keeps his operation lean but treats his people well. In turn, he likes them to go out of their way for their customers. His store has three salesmen, plus himself, a bookkeeper and an installation manager. In addition to their salary, DiFiglia also provides an investment plan as well as bonuses and full health insurance. His installers are all subcontractors, many of whom have been with him for years.

DiFiglia credits his success in tough times to his ten-step formula:

• One: Be different and go get customers.
DiFiglia’s philosophy defies the general “pull-in-your-belt” business attitude in uncertain economic times. He says he always tries to focus on new opportunities—areas where he can be different. The key, says DiFiglia, is not to be too influenced by things you can’t control. “You can’t control the economy, gas prices or the housing slowdown, but you can continue to be different and go after the customers that are out there.”

• Three: Put on a new face.
Keep changing your look and upgrade your real estate. In addition to buying his building last year, DiFiglia completed a major facility overhaul with all new windows facing Route 9. He painted, replaced the floors in the showroom and added new signs. Another DiFiglia truism: “Good customers want a great looking building with lots of new products.”

• Four: Keep up with consumers, sources of new business.
Keep adding new products and always look for pricing edges. Last year DiFiglia went to China to look for wood floor and came back with area rugs, furniture and elegant bathroom cabinets. He made a deal with the kitchen store next door, where he placed his cabinets, thus differentiating himself from the competition. DiFiglia’s rearranged his store and added over 500 area rugs to his product mix. Rug sales are going very well and he’s confident he has more than anyone in his area.

• Five: Be active in your community.
Working and playing in the community is something DiFiglia thrives on and it has given him notoriety, in a good way. DiFiglia’s nine year old daughter has been involved in all kinds of sports including competition horseback riding, and DiFiglia supports the soccer and baseball teams. At his entryway are photos and letters from the community. Also at the entry, DiFiglia posts photos of people he admires and he’s a big boxing fan. Customers love looking at the photos as they pick up their free T-shirts and pens.

• Six: Take care of your customer.
DiFiglia believes the biggest secret is taking care of customers. Getting a new customer means finding out about the potential customer who shopped the store but didn’t buy. If a customer has had her home measured but hasn’t been heard from, the salesperson calls twice. If there’s no response, the salesperson sends a “just wondering” letter. “Follow through is critical. If you don’t take care of your customers someone else will. Word of mouth is all you have,” says DiFiglia.

• Seven: Keep in constant consumer contact.
This is important, even in the store. Stay up with technology. Just Carpets has a TV monitor continually showing products and photos of what’s in the store. The service, called Ear-Glue, also provides in-store music and manages DiFiglia’s caller-on-hold messages. DiFiglia says that although this costs roughly $300 a month, it’s worth it not to hear your competitors’ ads being broadcast on generic local radio in the store.

• Eight: Show plenty of product.
And keep up with fashion trends. DiFiglia reads fashion and interior decor magazines. “Customers are into fashion,” he says, “and that’s where we need to be.” To illustrate his fashion savvy, DiFiglia has exotic woods installed on his floor as well as many different types of carpet with the best cushion.

• Nine: Price for profit.
Even though this might seem stupid, says DiFiglia, this is the time to raise margins! “When times are tough, you have to continually raise your margins while you’re looking for new business. You may be tempted to lower your prices, but this will defeat your purpose and bring in cheaper customers. In the long run you have to always be looking for the better customer.” The better customer, he says, will keep a store in business. The key is to get the most from each sale so you can get stronger referrals. Also, continually look to buy better, and differentiate yourself. As soon as he went to China, says DiFiglia, his suppliers looked at him differently and he began to get better pricing.

• Ten: Keep planning ahead.
DiFiglia’s planning his next expansion to keep his revenues growing.

Kerrie Kelly Discusses Her Role as Chair Elect of ASID