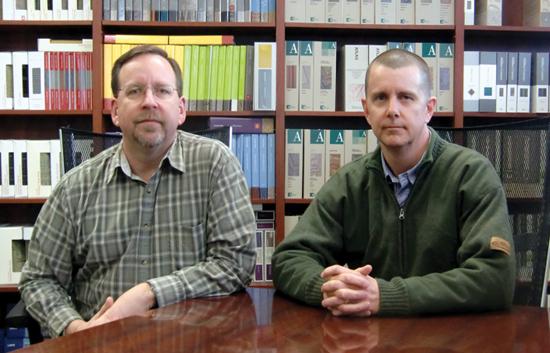 Commercial contractor Lippert Tile Co. of Menomonee Falls, Wisconsin has prospered during its 62 years, and especially through the recession, largely by intensive planning and meticulous attention to detail in all aspects of the business.

These qualities are what keep the business focused on its core strengths and organizational values. The firm, a Starnet member, has been one of the largest commercial contractors in the Milwaukee area for decades and has developed a reputation for high quality as well as adding value to every project it works on, partly by being a knowledgeable consultant for important constituencies like the architecture and design community.

“We have collectively shared values and a set of very high standards for comportment and behavior, things that we bring to all our relationships,” says Les Lippert, who co-owns the business with his brother, Jeff. “We expect our employees to bring their best selves to the office. We want to exceed expectations on every job.”

“We also have a great sense of responsibility and we don’t want to leave anything poorly made behind. A great reputation is easily destroyed by one bad decision. We know we’re building a legacy and we don’t want to leave anything behind that we can’t be proud of. We call ourselves a best practices company. The product is a commodity but what the customer will remember is the satisfaction of working with us.”

However, Lippert admits that it can be a challenge to keep his 60 employees pulling in the same direction.

That’s why Lippert is very careful about who he hires. He wants someone who fits the culture, and often his gut feeling will guide his decisions. His managers, in particular, all need to have the same business values and expectations, and they will often come from the ranks of his staff members.

“You can’t give people leadership qualities or characteristics, and I can’t change their character,” Lippert says. “So, number one, I look at their character, number two, personality, and three, their relevant knowledge. I look for people with common values and motivations and leadership characteristics.” Future leaders, Lippert says, present themselves through their actions. “Do they come in with a problem and leave it with you, or do they come in with a way to solve it and want to be part of the group that solves it? When you see that kind of behavior, you want to encourage it and foster it. I think you can have a sense of these things when you hire someone. You’ve got to walk away from the interview wanting that person to be part of the organization. So you’ve got to know the business well enough, and know yourself well enough, to discern what the person can add to the business.”

Lippert, age 50, says he’s now closer to the end of his career than the beginning and “at this point the people I’m looking for I want to be here after I leave.”

Self Evaluation
While finding the right people is important to Lippert’s success, that doesn’t mean they can all work together effectively without planning and communication.

One way the company has worked to do this is through twice-a-year planning sessions, in which business stops for a day and an outside facilitator comes in to help the organization evaluate itself objectively. It’s a fairly expensive and time consuming process but Lippert describes it as productive and effective, especially because revelations from the sessions are put into practice and followed up on regularly, reinforced by at least monthly team meetings.

In the strategy sessions—which Lippert believes are unusual in his industry, although they’re a widely accepted practice elsewhere—employees break out in teams, figure out what their problems are and what they need to do to solve them.

The company has been holding these planning meetings since the mid 1990s and they have produced “many small surprises,” Lippert says. However, in one memorable session a few years ago, everyone wrote down what they do in every job, from first contact with a potential customer through clean-up. The company looked closely at parts of the process where various departments overlapped, and it was decided that these areas posed potential for friction.

“In those instances we asked, what does each team need to give and get?” Lippert recalls. “For the first time, everyone understood how complex our process is and how dependent we are as individuals and as teams on each other. That changed a lot of what we do internally.”

Training Pays Off
Training is another area where the company puts a lot of emphasis. Among other things, extensive safety training has helped give the company an excellent safety record and keep worker’s compensation rates low, which is a major expense for the company, since all its installers are on-staff. The company pays about 65% of full premium.

“We bring in guys quarterly to discuss OSHA requirements, protective equipment and injury avoidance, and our insurance carrier has an excellent education program,” Lippert says.

“We also do skill enhancement training in-house with the manufacturers so guys are familiar with the nuances of the products and they can be safe and productive.”

Preparing for the Recession and Beyond
The Great Recession has hurt commercial flooring contractors just as it’s hit everyone else in the industry. Among other things, it has created a ruthless environment, where low-ball bids are common, sometimes by firms with little experience in the industry. As Lippert says, it only takes one aggressive contractor to lower margins for everyone.

Nevertheless, Lippert Tile has largely held to its principles and is willing to walk away from business.

“We will take work for a relatively small margin, but we won’t take work for no margin or less than zero,” Lippert says. “We try to give clients no excuses not to work with us, except someone else’s low bid. We have to be ourselves. Long term, that will win out.”

Again, preparation has paid off. While the firm had its best year ever in 2008, following a string of good years, the Lipperts heeded warnings that the bottom was going to fall out the market in 2009. Instead of taking a hefty distribution after the record year, the brothers left the money in the business, which has helped them weather the storm.

“Not that many companies were terribly well prepared for the severity of the downturn,” Lippert says. “That has led to some bad decisions toward pricing. We’ve lost a few competitors of all types and there will probably be more. I don’t see pricing returning to appropriate levels anytime soon.”

Experts for the A&D Community
Another reason Lippert can afford to turn down work is the reputation it has built over the years and the relationships it maintains. The firm has developed a reputation for its expertise, and the local architecture and design community often turns to Lippert for technical advice on flooring or problem solving.

One innovative way the firm uses this expertise is by providing certified Continuing Education Units for the A&D community and end users, working with Starnet and vendor partners. The firm has set up a separate division just for this purpose and it’s become a significant promotional vehicle as well as a help to its clients.

“In the last year and a half, we’ve probably had 500 participants,” Lippert says. “Some companies use entertainment to reach out, but this market seems to appreciate value added activities. It seems more importance is placed on expertise and networking.”