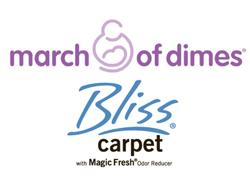 Beaulieu will donate $0.50 for every yard of selected styles of Bliss carpet sold during May and June.

Beaulieu’s Bliss carpet brand joins with Kmart, Martha Stewart Living Omnimedia, ProFlowers and other well-known brands to be the “official sponsor of Mother’s Day and Father’s Day” with its support of this March of Dimes annual fund-raising drive.

According to Chad Royal-Pascoe, vice president of national partnerships and cause marketing for the March of Dimes, “The imbornto campaign recognizes that every baby is born to do something great. So our goal is to help them be born strong and healthy.”

Since its founding by President Franklin Roosevelt, March of Dimes has funded accomplishments such as the polio vaccine, the discovery of the double helix in DNA and expanded newborn screening for every baby in every state.

“We are extremely excited about this unique opportunity to support something so worthwhile as this,” said Ralph Boe, CEO of Beaulieu of America. “This is a cause that resonates with everyone of us.”

Gary Fisher, EVP of Marketing for Beaulieu of America, said that while this is a year long partnership, much of the support will be focused during late spring, early summer: Mother’s Day and Father’s Day. “Beaulieu’s participation with our Bliss brand will be featured throughout this national campaign in USA Today and Martha Stewart Living ads, as well as outdoor boards in major U.S. cities. We will also promote this cause with our Bliss dealers, nationwide.”