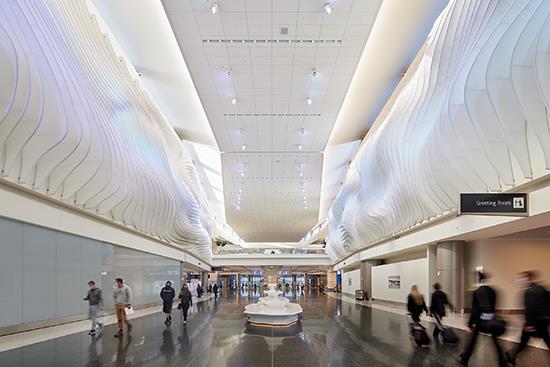 Around many of the nation’s cities, large and small, major airport renovation projects are underway. Tens of billions of dollars are being invested, and millions of square yards of floors are getting new finishes. And an infusion of funding from the federal government could help sustain momentum over the next five years.

As any international traveler can attest, U.S. airports are lagging behind their foreign counterparts. Like U.S. highways and bridges and big-city skyscrapers, they were state-of-the-art, pioneering projects when they were built 50-plus years ago. That’s what comes from being ahead of the curve; everyone that follows learns to do it better and more efficiently. Needless to say, the current generation of airports are newer, more up-to-date, more oriented around modern travelers and more aligned with new technologies.

According to Skytrax, an airport and airline research group, in its Top 100 Airports for 2021 rankings, there is only one U.S. airport in the top 25-Houston’s George Bush Intercontinental Airport, coming in at number 25-and there are only 13 others in the top 100. Rankings are based on global customer surveys covering nearly 50 traveler experience topics. At the same time, nearly a third of the top 50 busiest airports in the world are in the U.S., including the former number one and current number two, Atlanta’s Hartsfield-Jackson (which, incidentally, ranks number 46 on Skytrax’s list).

While the need to better handle passenger volume, both through expansions and efficiencies, is a driving force in airport renovation, so is the need to adapt spaces to modern technology. Ticketing operations, for instance, are rapidly transforming into remote and self-serve systems, which changes the configuration of the pre-security space. Also, many larger airports are increasingly seeking to be more culturally aligned with the city and region surrounding them to both create more of a flow into the cities and also to draw in non-travelers (and boost their revenue streams), and this can mean reimagining that public space with attractions and retail operations.

STATE OF THE SECTOR
“Airport work in the U.S. is a lively market right now,” reports Rian Burger, senior principal, airports, for A&D firm Stantec, noting that many large capital programs are being rolled out. Stantec, which is currently involved in multiple projects, is a leader in aviation sector design. In addition to working on domestic airports, including New York’s JFK, the firm has also done projects in South America, the Caribbean and Canada-including Vancouver International Airport, which has topped SkyTrax’s North American list for the last 12 years.

According to Dean Bakkum, director of operations at Feltus Hawkins Design, “Aviation business is strong right now,” adding that the firm’s business development team has come across several projects in the Southeast asking for requests for quotes. Feltus Hawkins is currently part of the team renovating Nashville International Airport, a project that started in 2020 and is slated for completion next year.

Diverzify’s RD Weis, a prominent contract dealer headquartered in Elmsford, New York, also reports a substantial volume of airport business. In addition to installation work, RD Weis also serves the aviation sector with its enhanced cleaning and disinfection services, which have been in high demand since the start of the pandemic.

Tambra Thorsen, senior principal and director of interiors at HOK, reports that the pandemic accelerated many projects, with the slowdown in air travel enabling more scheduling of construction work at its Salt Lake City International Airport project, which is essentially a new airport built adjacent to the active taxiways and runways. The $4.1 billion, 2.6 million-square-foot project was first conceived over 25 years ago and should be completed in the next couple of years. Another major project for HOK is the terminal renovations at New York’s La Guardia.

Dave Meberg, principal, president and CEO of Consolidated Carpet, a major contract dealer headquartered in New York City, reports that demand has been fairly solid and could get a boost from infrastructure funds. Renovations in New York’s three international airports have been a priority for the state for the last few years.

In mid-December, the U.S. Department of Transportation’s Federal Aviation Administration (FAA) announced that in 2022 it will award $2.89 billion in infrastructure money to over 3,000 airports in the U.S., to be invested in a range of projects, including terminal work. The funds come through the Airport Infrastructure Grant program, which will provide $15 billion over five years. And according to the FAA, that represents about a third of the investment requirements of the aviation sector.

THE RENOVATION PROCESS
Airport renovations, which are often massive projects, can be logistically daunting. The entire process can take decades, and ten-year or even 20-year master plans are not uncommon. It’s bureaucratically complex, with involvement from all sorts of stakeholders-local management groups, city groups, federal governing bodies. And products must meet various requirements, like GSA standards and ADA compliance. Once the project is funded and finally lurches into motion, the design process itself can still stretch out 18 months to two years, though for smaller renovations it can take a year or less.

The process of actually doing airport renovations is highly choreographed. Getting product and equipment into the location requires arriving at odd hours to be escorted by security onto the tarmac and around to the terminals-and working in active terminals comes with its own set of hurdles. For larger-scale construction projects, scheduling can be the biggest obstacle. Flooring installation, as the last major element in the projects, can be preceded by 30 or more different trades, so there’s a lot of potential for delays and other challenges. It’s a process that has come under much more pressure during the pandemic, with supply chain issues and limited labor rippling through just about every trade in the construction and renovation process.

FLOORING USE IN AIRPORTS
Even though airports are huge, there’s not much diversity of materials. In contrast to most other commercial segments, the majority of airport flooring is poured in place, rather than installed. Most of the square footage in airports is made up of terrazzo, which offers unique and essential attributes to the airport environment. It’s extremely durable and can last 50 years or more and still look good and perform well. And compared to porcelain and other modular hard surface products, it has no regular joints for carts and luggage to clack over and no corners to crack and break. However, it also requires skilled labor, so it’s very pricey. And it takes a lot of time, requiring sealing off the area if it’s being used in an active part of an airport.

Generally speaking, wherever there is moving traffic, the floor is likely to be terrazzo, but where the traffic pauses, it will likely be carpet underfoot. Restrooms are frequently terrazzo, but they can also be porcelain tile or other high-performance hard surface flooring. RD Weis, for instance, has also poured epoxy floors, as well as DuraCryl, a terrazzo based on biopolymers from a Dutch firm. And for offices and back-of-house areas that don’t face the same level of wear-and-tear, vinyl products are more common.

For Feltus Hawkins’ work at Nashville International Airport terrazzo makes up the majority of the new design, including in the security areas, where it replaced VCT. Carpet tile was specified for the “hold rooms,” which is the industry term for the gate areas where they have all the seating, and the general circulation areas connecting them. The removal of the existing carpet generated a wave of nostalgia, leading the airport to cut it up and turn it into doormats, which it sells on its shopping website.

For Salt Lake City, HOK specified epoxy terrazzo for the bulk of the square footage-Thorsen reports that the firm hasn’t used cementitious terrazzo in decades. And for the hold rooms, HOK used custom broadloom from Bentley Mills.

In addition to terrazzo, Stantec’s Burger has done installations of granite tile and, more recently, 4’x4’ quartz tile. And he points out that porcelain, including large-format tiles, can be an affordable alternative to terrazzo when a budget is tight, though the workmanship is key. But if it’s installed perfectly, which can be a tall order, it can last decades.

Consolidated Carpet’s Meberg notes that his firm’s projects in La Guardia Airport, part of an $8 billion comprehensive construction and renovation package, include a good amount of carpet. Most of the firm’s work has been in Terminal A and Terminal B-in June 2020, Terminal B was completed, and Terminal A should follow later this year-as well as some work in the Delta terminal. Consolidated is subcontracting the terrazzo work and installing carpet, more carpet than one would typically see at an airport (even the baggage claim area is carpeted), along with LVT, sheet goods and rubber, mostly for back-of-house applications. In Terminal A, Consolidated is using a lot of Tarkett’s Powerbond 6’ carpet, while in the Delta terminal, it’s mostly Milliken carpet tile.

While supply chain constraints have hobbled the manufacture of a wide range of flooring products, Meberg notes that the bulk of flooring going into the aviation sector-terrazzo and carpet-is sourced domestically, so airport flooring has been largely buffered from the impacts. Domestically produced porcelain is also abundant.

FLOORING’S ROLE IN DESIGN
Design for airport flooring is generally restrained, particularly for long-term products like terrazzo that may well be in place for the next half-century, so the goal is timeless design and aesthetic longevity. Trends are managed with paint, furniture and wall applications (if there’s space), or in the form of specific art installations. “The floor doesn’t give as much opportunity for art because it needs to be permanent,” says Burger.

When it comes to carpet, there’s more room for creativity and expression, mostly because that carpet will be replaced in under a decade. In terminals, the carpet selection often falls to the airline anchoring the terminal, like the Delta terminal in La Guardia, where Delta guides the specifications, including custom colors and designs.

Flooring also serves the larger needs of the airport, which generally involves moving people quickly and efficiently from the ticketing area through security, so they can spend the bulk of their time near their gates, ideally wending their way through the retail stores, whose concession fees help drive airport revenues.

Ultimately, it’s the product’s performance that has the biggest impact on specification. Thorsen says that when it comes to carpet, she looks to manufacturers that have high-performance nylons, and that offer flexible custom programs, since just about all airport carpet is custom. It’s also worthwhile to work with a well-established manufacturer, since the success of these projects relies on long-term relationships, she says.

FUNDING RENOVATION
Virtually all U.S. airports are locally owned and operated by public entities like local, regional or state authorities that can issue bonds for renovation work. FAA grants are another source of funding that typically goes for airfield improvements, although for this new cycle of funding, terminal projects are specifically cited. Generally, terminal improvements are a public/private partnership of bonds and airline funding. The airports themselves generate revenues from aircraft landing fees, lease space, parking and concessions.

Many of the top-ranked airports-largely in the Middle East and East Asia-are funded by the state, making ambitious, large-scale projects much easier to pull off, like Hamad International Airport in Doha, Qatar, number one on the Skytrax list, which cost $17 billion and was opened in 2014.

Also, aviation projects can vary hugely in size and scope, from simply renovating bathrooms with new tile or terrazzo to building almost entirely new airports, like in Salt Lake City, where the airfields and taxiways remain but new airport buildings are constructed around it. In the U.S., where there are over 5,000 public airports, there is little demand for new airports. Here and there, smaller regional airports are expanded, or occasionally, existing regional airports are relocated due to insufficient footprints or to combine two small airports into larger regional hubs.