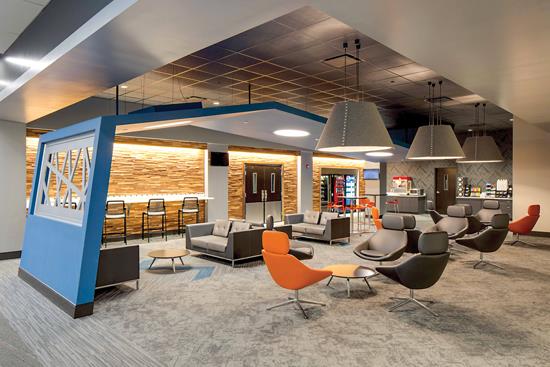 Awell-known global package delivery company commissioned a modernization of its more than 20-year-old core flight operations facility in Memphis, Tennessee, and ANF Architects was called in to clear the slate and create a branded, efficient space. The Memphis facility is home base for many of the company’s pilots, who keep packages moving around the world, around the clock, and, as such, needed improved flow, functionality and aesthetics. In the redesign, flooring played an important role in both bringing the design team’s flight-oriented aesthetic to life and assisting with creating circulation paths in the large open plan.

Across most of the spaces, modular carpet is the predominant floor finish, covering almost 40,000 square feet. This allowed the design team to seamlessly build in the walk-off at all entries and delineate space. The design team chose Interface’s Net Effects and Urban Retreat collections to achieve its goals. Throughout the facility, the carpet tile is a neutral palette in shades of grey. The work and lounge areas feature small pops of color. The design team played with styles that allowed them to fade from one product to another, creating some wide “ground routes” and using bands of a contrasting single tile to imply secondary routes.

Carpet tile was also chosen for its acoustic properties. The ability to understand speech can drop significantly in a loud reverberating space. Good acoustics are critical for clear communication among team members, and clear communication goes a long way toward achieving smooth operations.

In designing the large open plan and facilitating a navigable space that pilots and staff could hum through harmoniously, the design team had a lot of square footage to organize. The concept for the core of the plan was vapor trails left by airplanes in the sky. This is expressed, first and foremost, with a large-format, crisp white acoustical ceiling, bisected by continuous bands of LED fixtures crossing the open space at various angles. On the floor, the carpet tile mimics the LED pattern, doubling as ground transportation routes.

Company colors are used boldly at the facility entrance. Here, new arrivals enter through airport security screening, which is designed as a portal. Repeating design elements fold from wall to ceiling and back to wall, drawing pilots and staff in and implying a sense of motion.

In the lobby, where the pilots can check in and drop their luggage, the space between the two entries narrows to a point, then folds into the computer counter. The counter extends the line further, folding down to the carpet to meet with one of the bisecting bands.

The work flow continues into the flight planning area, where the pilots meet their crew and confirm schedules, as well as check routes and weather conditions. The area is designated by a faceted bronze painted “night sky” ceiling, punctuated by wing-shaped light fixtures. Depending on schedules, pilots and crew may find themselves in this space for as little as an hour or up to a full day. Some may grab a quick snack and check their email before hopping a shuttle to their plane, while others have time to relax in the lounge space, complete work at an open station or take in the latest news in the café.

Adjacent to flight planning are the management offices. Here, the angled bisecting lights are repeated on a smaller scale, and the carpet pattern implies aerial views of the earth, bisected by a grey runway in motion, adding interest to the largely open core surrounded by offices.

The open lounge provides an environment to relax and work between flights. Seating is laid out with small groupings for two to four people for a hospitality feel. Pilots can choose to sit with a group or find some respite in one of the tall wingback chairs. The groupings are laid out following the same angles as the floor and ceiling, further emphasizing the pattern.

Lighting in the café is turned down a notch, as the space provides a quieter alcove with various types of seating to enjoy drinks, snacks and company. The space is denoted by a folded teal screen wall that playfully nudges into the open lounge space beyond.

The client’s sustainability goals aligned nicely with Interface’s green business practices. All the old carpet—also by Interface—was reclaimed to be recycled back into carpet.