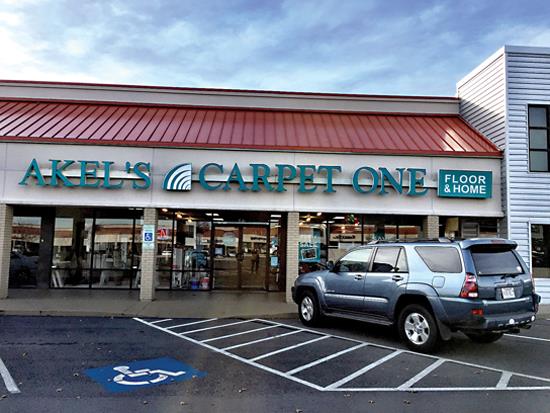 Richard Akel knows what he wants and isn’t afraid to chase it down. The Arkansas-native joined Carpet One as a member in 1994 with virtually no experience in the flooring business, and he credits his success, in large part, to his aggressive approach. With regard to business strategy, he steals from the best, hires the best and expects the same intensive approach from his employees.

Akel describes himself and his staff as aggressive, and while that’s a word that sometimes gives people the willies these days, for Akel it’s not about attack and confrontation but about the forceful pursuit of his business goals. Tenacity. Showing up and putting in 100%, every day. That’s how Akel runs his business and how he expects his employees to perform.

CONVINCING CARPET ONE
Before his foray into the flooring industry, Akel operated a lumberyard in Arkansas that, as a side venture, sold rolls of carpet and vinyl, pulling in an extra $200,000 to $300,000 a year with flooring sales. Then, in 1994, at a family reunion, Akel met Michael Essis of Pennsylvania’s Essis & Sons. Essis told Akel that he should get serious about flooring and join Carpet One, of which Essis & Sons was already a member. Akel had never heard of the group, but he went home and contacted them anyway. “Carpet One didn’t really want me initially because I didn’t have a showroom, and I wasn’t really in the flooring business,” he says. “But I knew it was a great organization, and I had to fight to join.” So fight he did.

At the time, Carpet One had co-op member companies in every state except Arkansas and, in fact, according to Akel, had been actively trying to recruit an Arkansas floorcovering dealer into its network. None bit, so eventually the group accepted Akel. “They had no choice but to take a chance on me,” he adds.

The collaboration turned out to be a profitable venture all around. Today, Akel’s has five retail flooring locations in Arkansas as well as a strong commercial and multifamily floorcovering businesses, which were opened in March 2013.

REINVENTING THE WHEEL
Unlike some entrepreneurs, Akel isn’t hoping to revolutionize the business of selling floorcovering. Rather, he’s more than happy to take note of what’s worked for others and put it to use in his business. And, in large part, he’s found that in Carpet One the best tend to imitate, adding, “I’ve met a bunch of great guys in Carpet One. I don’t invent, but I love to reinvent. I copy from the best.”

He is similarly humble when asked about how he managed to run a flooring business-traditionally believed to require a lengthy learning curve-off the cuff. “I still don’t know much about the business in detail,” he says. “I have great people, and my growth is because of my people, not me. To find the right people, I search and conduct interviews, but I also steal. If I see someone I want [working in another business], I try to go after them.”

In hiring employees, Akel looks for individuals that exude the same intensity that he does. “We are aggressive,” he says. “I believe that everyone who works with us gives 100% to 110% every day. It’s a very intense atmosphere, and people who aren’t intense don’t make it here.” Rest assured, Akel isn’t talking about the kind of aggressive salesmanship that makes customers want to back slowly out the door, but about acting on the knowledge that everyone who enters a floorcovering store is there to buy floorcovering-not to browse. “No one walks into a flooring store looking to buy a car,” Akel says. “People don’t walk in to a flooring store to waste your time. They walk in to buy.” On that belief, the staff requests personal contact information for all customers and follows up in quest of a sale.

WE MAKE IT BEAUTIFUL…FOR LESS
Akel reports that the percentage of sales he spends on advertising is higher than most of his competitors. Of that budget, he spends 70% on television commercials-broadcast on the top three networks, ABC, NBC and CBS-that feature he and his wife, Star. The ads are written by Rob Weintraub of Weintraub Advertising, an agency based in St. Louis, Missouri, and make use of Akel’s funny yet intense vibe. Frequently, the ads feature a special offer, such as pay no sales tax, no interest until 2020 or All the Fixins Free (free installation, carpet pad, measure and estimate, furniture moving, delivery, take up and haul away) and all feature the brand slogan “We make it beautiful…for less.”

Akel’s is currently diving more deeply into social media. The company contracts its social media work through an agency and meets every two weeks to discuss strategy. “We have a great social media plan laid out for 2017 that we will try to execute,” says Akel.

PROACTIVE RATHER THAN REACTIVE
Akel’s entire installation team is contract laborers, which he reports is the standard mode of operation in his area. Recently, Akel hired a former installer to act as installation inspector for Akel’s. The inspector visits every job to check quality and act as a resource for customer questions.

For many reasons, this registers as a great idea. First and foremost, installation teams that might be inclined to slack off or take shortcuts are less likely to do so when they know someone will be coming in to check their work. Second, customers might not feel comfortable directly questioning an installer about the nature of their work, but might feel more at ease questioning a third party. Third, checking complete or nearly complete jobs allows Akel’s to head off problems before they become problems and effectively get in front of issues to proactively manage solutions.

“With the rate we have grown, we hired an installation guy to inspect every job, every day,” explains Akel. “I’m excited about it. It’s the next step in going from good to great.” The installation manager visits each job site when it’s nearly complete-but while the installation teams are still on site-and follows up later with phone calls to each customer to answer any remaining questions.

THE MIX
When it comes to choosing products, the retailer sticks with Carpet One’s suggestions. In fact, he estimates that 95% to 100% of his soft surface selection is Carpet One-endorsed fibers. Akel’s does not stock area rugs but does offer custom-made bound and serged area rugs. It outsources the work for those products locally.

On the hard surface side, Akel’s sells a full range of flooring, and its biggest growth category at present is resilient, specifically LVT.

Eighteen months ago, the firm added cabinets and countertops to its offering. Akel reports that that business is doing very well. His employees can help a customer purchase pieces for a kitchen or design a full-blown remodel.

LONGEVITY
Akel makes reference a friend in Mississippi who has been in the retail flooring business for 68 years. Will Akel be in the business that long? When asked this, he pauses for a moment, mumbles a few calculations to himself, then says, “Yes, I’ll be working at 91 for sure. I absolutely love this business!”

Though NC Floors Commercial and National Contract Flooring aren’t yet four years old, they have grown quickly. Says Akel, “Any time you can go chase business instead of waiting for it to walk through the door, it’s easier to grow. It’s really just a matter of how much you want to go out and get.”