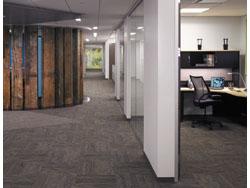 Regardless of the obstacles, the greening of the carpet industry has become an unstoppable force. The past year’s successes—and even its disappointments— highlight the prevailing philosophy in the carpet industry, that sustainability is a fundamental line item in its future. Also, for the first time, consumers have begun to take an interest in the environment, and manufacturers have begun to extend their environmental efforts to residential carpet.

It reflects well on the industry that goals are being met and promises kept. When Mohawk Industries came out with SmartStrand, its DuPont Sorona PTT fiber, in late 2005, the firm said that a bio-based component was not far behind. This year it delivered. Shaw Industries bought the half of Evergreen Nylon Recycling it didn’t already own early in 2006, and claimed it would soon be up and running, making new nylon 6 out of old. Evergreen is already making fiber.

On other fronts, we’re just months away from NSF 140, the Sustainable Carpet Standard, becoming reality. CARE (the Carpet America Recovery Effort) reports that the number of recycling centers has more than tripled in the last year. In another first, InterfaceFlor has allied with Universal Fiber to use reclaimed nylon 6,6 in a new fiber system. Mohawk has opened up Mohawk Greenworks Center, a major waste carpet processing facility. All these developments reinforce an unassailable truth, that the carpet industry is heading down a green road and it’s not looking back.

Driven more than anything by the rising cost of crude oil, the economics of sustainable strategies are becoming increasingly attractive.  Some of the bigger players involved, including carpet mills, have balanced the economies of scale with the risks inherent in new ventures, and have invested in long term green projects that are not without risk.

A good example of that is Shaw Industries getting Evergreen Nylon Recycling going again, after it failed in 2001, taking with it some visionary entrepreneurs in the reclamation business. Now Evergreen is back and so are the entrepreneurs, and despite tough market conditions and one particular piece of bad luck, the fledgling reclamation industry seems more dogged and committed than ever.

That piece of bad luck was a fire at Columbia Recycling, one of the largest recyclers in the world, at the beginning of this year. Coupled with plummeting demand for nylon 6,6 from the struggling automotive industry and repercussions from the housing slump, the fire at Columbia put intense pressure on many players in the reclamation business.

Affecting the low 2006 tally was an increasing reluctance among players to give out their numbers, forcing CARE to estimate diversion rates. Nearly 90 million of the 261 million pounds was derived through these estimates, which may have resulted in undercounts.

It’s not entirely clear why some players are not giving their numbers, though it’s possible the aim is to preserve a perceived competitive advantage. Of the 51 surveyed companies, 32 responded with volume figures in 2005 and only 19 in 2006.

This year, the biggest impact on reclamation has been from the fire at the Dalton, Georgia firm Columbia Recycling, which took out the entire operation for a month. The good news is, though, that Columbia Recycling is already back to 75% of capacity and it’ll be at 100% by the beginning of next year.

At its peak, Columbia was recycling over 4 million pounds of carpet waste a week. When it stopped operating, several small entrepreneurial firms that collected and sorted reclaimed carpet to supply processors like Columbia felt the impact.

In fact, the fire shook the entire reclamation infrastructure. Columbia processes post industrial and post consumer carpet waste, including both nylon 6 and nylon 6,6, as well as polypropylene and polyester, but it was the nylon 6,6 waste stream that was most adversely affected. Columbia’s nylon 6,6 is baled and shipped for use as injection molded components.

There are alternate outlets for the other plastics, including vast demand for nylon 6 from Shaw’s Evergreen, but Columbia accounted for the majority of the reclaimed nylon 6,6 on the East Coast. Following the fire, processors and sorters were soon buried in inventory and running out of warehouse space. Even now, as Columbia builds back toward maximum capacity, the future of some of these firms remains uncertain.

For the complete 2007 Sustainability Report, The Greening of Fiber, Developing Green Energy, and Sustainability in Hard Surface,  see the August/September 2007 issue of Floor Focus Magazine.