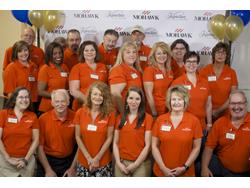 Marshall Field’s, a leading U.S. retailer at the time, commissioned a unique machine capable of recreating the detailed craftsmanship, vibrant colors and sumptuous feel of a hand-woven rug. These new, machine-made rugs rivaled their handmade counterparts, and their accessible luxury became the enduring hallmark of the Karastan brand.

This weekend the company honored the contributions of employees past and present with an open house celebration. Approximately 300 people joined in the festivities, celebrating the long history of the Eden location and the individuals who have contributed to its success over the past 90 years.

“I’ve had great-grandparents, grandparents and parents work here,” said electrical technician Don Hudgins. “I guess you could say I’m fourth generation. It’s just a testament to the product that we make and the team that we’ve been in business for 90 years.”